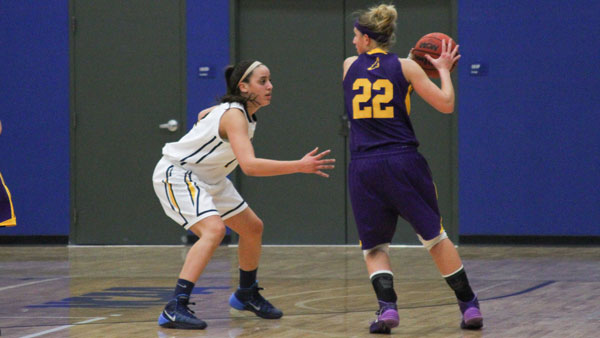 The women’s basketball team was eliminated in the Elite Eight round of the NCAA Tournament on March 15 after a 61–59 loss to No. 4–ranked Tufts University.

The Blue and Gold led for most of the first half, getting four combined 3-pointers from senior guards Kathryn Campbell and Mary Kate Tierney. Despite holding an early lead, the Bombers went into halftime trailing 32–30. Campbell led the Bombers in scoring with 21 points, while Tierney added 16 points, nine assists and six rebounds.

The Jumbos, now 30–1 this season, held their lead through the entire second half and opened up a 10-point lead with five minutes to play. However, the Bombers clawed back in the final minutes and trailed by one point with eight seconds remaining.

Behind by two points on the final play of the game, the Bombers inbounded the ball and rushed down the floor. Freshman guard Ali Ricchuiti attempted a contested reverse layup, but the ball rolled off the rim and fell to the ground as the time expired.

The Bombers finished the season with a 26–5 record, which included an 18-game winning streak before losing to Tufts. The Blue and Gold also won their third straight Empire 8 Conference Championship and advanced to the Elite Eight round for the first time in the team’s 47-year history.

To read about the women’s basketball team’s victory against Amherst College, click the link: http://theithacan.org/?p=2237