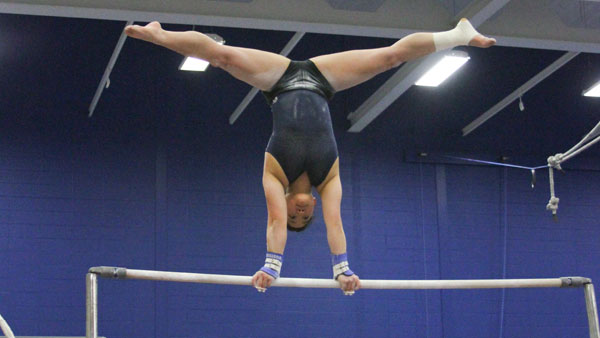 The gymnastics team beat its goal of having a team score of 180 points, while celebrating Senior Day in its last home meet of the regular season against SUNY Cortland on March 1 in Ben Light Gymnasium. Though the Bombers beat their goal, they still lost with a final score of 187–182.50.

Many of the athletes in this meet reached personal goals, which they said they believe helped them to beat a team goal of 180. Senior Shilanna Gallo said this meet was bittersweet, but she was still able to compete at her all-time best.

“It is kind of sentimental to know that this is our last home meet of the year,” she said. “But to go out there and just do the best routine I’ve ever done of my four years and get the highest score was just a great feeling.”

Senior Rani Jacobson had the highest score of the team on vault with a score of 9.50, placing fourth overall. Freshman Alexis Mena and Harrington also had career best scores on the vault at this meet, with Mena scoring 9.325 and Harrington scoring 9.375.

Senior Kate Woodward and sophomore Lara Haberle paved the way for the Bombers on the balance beam. Haberle scored 9.550 to place third, and Woodward scored 9.450, placing right behind Haberle.

Woodward said she felt about competing in the senior meet and how happy she was with the teams results.

“It’s just an honor to be a part of this team and to compete for Ithaca College,” she said.

Harrington was the only all-around competitor for the Bombers. With her combined scores, she placed second overall with a score of 36.300.

At the end of the meet, each senior stepped in front of the crowd in attendance and was honored by their coaches and fellow teammates. Each senior received flowers and gifts, and head coach Rick Suddaby had something nice to say about all of them.

Suddaby said this group of seniors will particularly be difficult to replace.

“It’s like family,” he said. “You get used to interacting and helping and being around [the team], so we’ll miss them for sure.”

Though this was the last regular season home meet, the Bombers aren’t finished competing. The team will return to action at the East Coast Athletic Conference Championships on March 8 at Springfield College in Springfield, Mass.