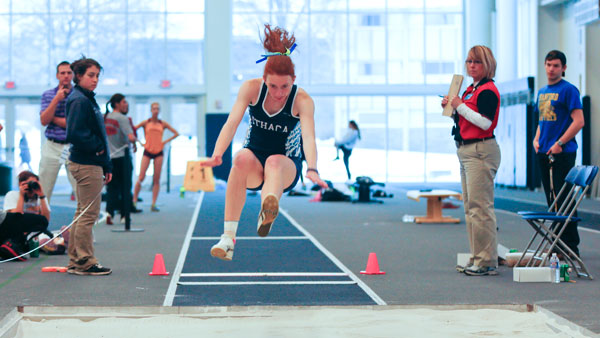 The men’s and women’s track and field teams competed Feb. 21 at the Ithaca Bomber Invitational and Multi in Glazer Arena. Both squads had a number of great performances, as the men’s team met five ECAC qualifiers, while the women’s team met 10 ECAC qualifiers. Junior Dennis Ryan ran a personal best in 800 meters in 1.56.90 and placed third.

“We had a solid day,” Nichols said. “A number of athletes qualified for ECAC qualifiers. It was a long day, a lot of teams were here, close to 25 teams. It was the last indoor meet at home for our seniors and it was a great meet for them.

Nichols said he is looking ahead, because the team will compete in the New York State College Track Conference Championships Feb. 28–March 1 at St. Lawrence University in Canton, N.Y.

“I have high expectations for everybody,” Nichols said. “I want them to do better. We are not done yet, we have a couple weeks until the State [Championship], and we are trying to keep build into that. That’s the goal, and as always try to do better.”

Junior Rashaad Barrett placed third in the 60-meter dash with a time of 7.06 seconds and met an ECAC qualifier. Barrett said he is satisfied with his performance because the meet was highly competitive.

“It all went pretty good, because there was a lot more competition here,” he said. “We came from a couple of low key meets in the past two weekends, but today there were a couple of Division I schools.”

Although Barrett is happy for his last performance, the sprinter looks forward to do better.

“I think I still have room for improvements, but we still have a lot of time left in the season to work on it,” Barrett said. “I am still glad with time that I got today, so I am just gonna focus on the next meets and continue to get better”.

“Overall everything was really solid,” Potter said. “We had a lot of great performances today, some people are coming off on illnesses which is a challenge. We had people that did not compete in the last weeks, so at least we got them in uniform and on the track today.”

Junior Emilia Scheemaker placed seventh in the long jump with a mark of 5.30 meters. She said she is satisfied and confident for the next meets.

“I am pretty happy today,” Scheemaker said. “Long jump was right around what it should be, but I don’t think it was not the hardest meet of the season. I think I have things to work on, it’s clear from today that I have to work on those things”.

The Blue and Gold return to action Feb. 22 at the Deneault Invitational at Cornell University.