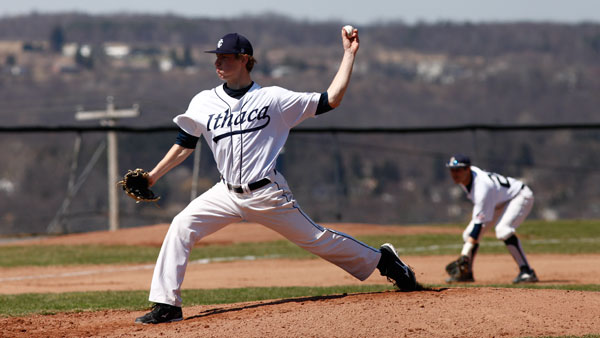 Ben Bishop/The Ithacan
Sophomore pitcher Benji Parkes delivers his pitch during the first game of the Bombers’ doubleheader against Utica College on April 12 at Freeman Field. The Blue and Gold won both games 3–2 and 7–3, respectively.
By Kristen Gowdy — Staff Writer
Published: April 30, 2014

“One step at a time” has been the baseball team’s mantra from the beginning of the 2014 season.

The Bombers have had an added pressure put on their shoulders from the moment the University of Southern Maine defeated the 2013 squad in last season’s national semifinals on May 28 at Fox Cities Stadium in Appleton, Wis. Last year’s team posted a 41–8 overall record, featured two All-Americans and appeared in the national semifinal game for the first time since the program won a national championship in 1988.

“Coach tells [us] just to take it one game at a time,” Stark said. “We are a different team than last year. We have a different identity. Sometimes we tend to get a little ahead of ourselves.”

With three games left in the regular season, the No. 20–ranked Blue and Gold has stuck to that mindset, posting a 26–8 overall record and winning the Empire 8 championship for the third year in a row. Junior third baseman Matt Connolly said the team has established its own identity while maintaining last year’s winning ways.

“We’re a gritty, scrappy team,” he said. “We grind out wins. We aren’t a big power hitting team. We’re all about pitching and defense, that’s how we win games, and how we manufacture runs. Obviously we want to win a national championship, but we have to take it bit by bit. We tend to get in trouble when we look too far ahead.”

Both Stark and Connolly said the team has, on several occasions this season, looked too far into the future instead of focusing on the present. For instance, the team won three out of four games against league rival St. John Fisher College, then dropped an extra inning game 4–3 to unranked SUNY Oswego on April 23 in Oswego, N.Y. The loss marked the first time the Bombers have lost to the Lakers since 2007.

In addition to the loss to Oswego, the Blue and Gold also dropped a 6–0 decision to the University of Rochester on April 16, three days after sweeping conference opponent Utica College.

Connolly added that the team has extra motivation to focus on the final stretch of non-conference games. Because winning the Empire 8 conference championship does not guarantee the team an automatic NCAA playoff bid, the Bombers must post a strong in-region record in order to earn a spot.

On April 26, the Blue and Gold posted two big wins against SUNY New Paltz, which helped solidify the team’s position in the regional rankings. As of April 24, the Bombers were ranked second in the region behind SUNY Cortland.

The Bombers have yet to play rival Cortland because inclement weather postponed the game, which was scheduled for April 22 at Freeman Field. Given the success of both teams, the game against the Red Dragons would have been a determining factor in the regional rankings.

Freshman second baseman Josh Savacool said the weather has put a damper on the team’s season because the Bombers have had so few home games. The Blue and Gold have played just three games at Freeman Field this season. In comparison, at this point last year, the team had played 13 games on its home field.

“That atmosphere at home is huge for us,” Savacool said. “For instance, one game we had to travel to Rochester instead of playing here, and we ended up losing that game. It was hard to focus because we had to go all the way out there. It’s difficult to adjust.”

However, weather has also affected the team’s practice schedule. The Bombers have been unable to practice outside for the majority of the season, instead turning to the Athletics and Events Center for indoor practices.

“I can count on both my hands how many times we have been able to practice on our field,” Connolly said. “That week will definitely help us to recuperate mentally and physically.”

For Valesente, finals week will not only be the team’s first full week of practice since before the season began, but he also said the time will be important for several players to recover from minor injuries.

The team is scheduled to play St. Lawrence University on April 30, and then it will not have another game until May 10 against SUNY Brockport. The Bombers will then play a make-up game against Oswego on May 11. Both games will be crucial for the Blue and Gold, as they are both in-region games and therefore will affect playoff seeding, which will be officially determined on May 12.

But for now, Stark said the team isn’t thinking about the Brockport game because it is focused on beating St. Lawrence. Junior shortstop Jared Amory said the team will continue to focus on the present and rely on team camaraderie in order to replicate last year’s success.

“When you have good chemistry, you start to get into that winning mindset, and you can go as far as you believe you can,” he said. “We know what it takes to win a national championship, and we’re focused on that goal.”