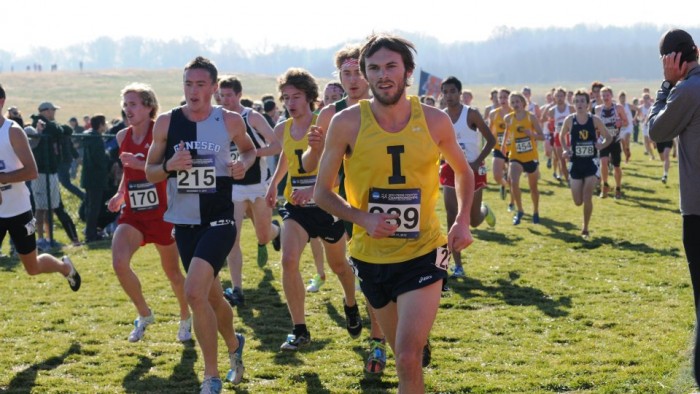 The women’s cross country squad finished in 5th place overall at the NCAA Atlantic Region Championship on Nov. 10 and received a spot as a team to compete at the national meet Nov. 17. The men’s team finished 7th overall, falling just short of a team qualification, but sent two individual athletes to Terre Haute.

With only one week between the two competitions, both the men’s and women’s teams were forced to prepare for what would be the biggest race of the year.

Freshman Sawyer Hitchcock said the Bombers trained the way they had all season going into the national championship in order to approach this meet as if it was another meet on their schedule.

“Most of our preparation was to just keep doing what we’ve been doing, because that was basically our coaches’ motto,” Hitchcock said. “The goal was to try to think of nationals as just another 8K; if we could do that, we knew we could do well.”

All of the competing members of the team flew into Detroit on Nov. 15 and were expecting to fly into Indianapolis on a connecting flight. Because of a delay, the South Hill squad stayed in Detroit overnight and completed the rest of the trip Friday.

Women’s cross country co-captain Carly Graham said it finally became real to her that she would be competing in a national championship once the team got to Terre Haute.

“It finally hit me once we arrived,” Graham said. “It was awesome to see all of the NCAA logos and to know that we were actually doing this.”

On Saturday, the athletes arrived at Rose-Hulman Institute of Technology ready to race across a course lined with fans screaming and cheering for teams and athletes from across the country. Sophomore Alexa Rick said this race could not compare to any race she had ever attended before because of its atmosphere and design.

For the men’s team, senior Nathan Bickell and Hitchcock both competed as individuals. Bickell clocked in at personal record of 25:52.80 to finish 127th overall out of 280 runners, while Hitchcock crossed the finish line in 149th place at 26:01.50.

Hitchcock said both he and Bickell were content with their finishes, especially because they were their best times of the season.

“There’s not much more that can be asked for than a personal record in the last race of the year, and this is what me and Bickell both did,” Hitchcock said. “I feel extremely lucky to have gained experience as a freshman, and hopefully this experience will help me and the rest of the team qualify for it in the future.”

The women competed as a team and finished in 30th overall, topping their 31st place finish in 2009. Graham said the Bombers benefited from the efforts of every runner on the squad on their way to Terre Haute.

“It was a great season overall, and even though only eight people can make the trip to the nationals meet, it doesn’t mean that everyone did not make a difference,” Graham said. “Everyone’s support was given along the way, and we all accomplished this together.”