Blue and Gold set to host and compete in National Championships 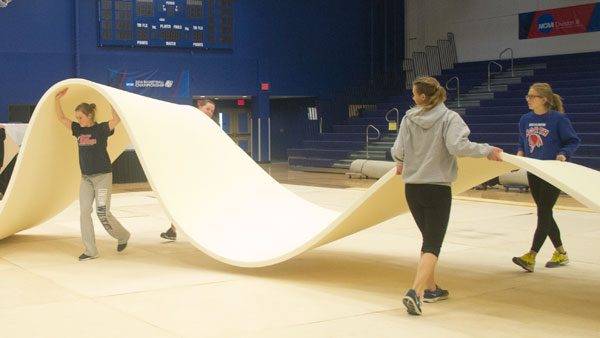 The gymnastics team is preparing for its upcoming meet by using two of the basketball courts in the Ben Light Gymnasium to set up its bars, mats, vaults and beams in addition to setting up the other side of the gymnasium where it usually competes.

All of this preparation is for the National Collegiate Gymnastics Association Championships, which the squad will host for the first time in 12 years.

Head coach Rick Suddaby said he has been waiting to host the NCGAC again for a long time. The last time Suddaby hosted the National Championships was 2002 and prior to that in 1996. Each time a team in the National Collegiate Gymnastics Association would like to host the national championships, it must put in a bid for selection. Suddaby decided to put in a bid for this year because he thought it would be profound to have the competition in the new Ben Light Gymnasium.

“We put a bid in two years ago to host, and now we’re building it and making it happen,” Suddaby said. “Our whole facility has been renovated, so it will be nice to show it off to the rest of the league.”

The gymnasts on the team are ready to host the NCGAC as well, and they have noticed Suddaby’s enthusiasm for the upcoming meet. Sophomore Megan Harrington said hosting the National Championships is an extensive process.

“[Suddaby] is planning everything and being all busy [with the preparations],” Harrington said.

Preparations include setting up the gym so it is able to fit the six visiting teams competing in the championship. Teams from the eastern and western region will compete, along with individual representatives from teams in both regions.

Usually only the top three teams from the Eastern Collegiate Athletic Championships compete in the NCGAC. But because the college is hosting the event, the entire gymnastics team is able to compete this year.

Suddaby said he knows it will be a struggle for his team at the NCGAC considering the rough season it has had because of team injuries, but he’s also glad his team has a chance to compete on the national stage.

Senior Shilana Gallo said this meet is bittersweet for Suddaby and some of her fellow gymnasts because it is the last meet of the 2013–14 season. Gallo said she can’t believe the season and her college gymnastics career are coming to an end.

“It’s kind of surreal. I can’t believe we only have one more practice after [March 17],” Gallo said. “After doing something for so long, and it’s such a major part of your life, it’s going to be sad to say goodbye to it.”

It hasn’t been an easy season for the Bombers, but Gallo said they are prepared for this meet and ready to do the best they can.

“We put in the hours all season, so our bodies know what to do,” she said. “Now it’s just training to get our focus and our confidence ready, but physically we’re all ready.”