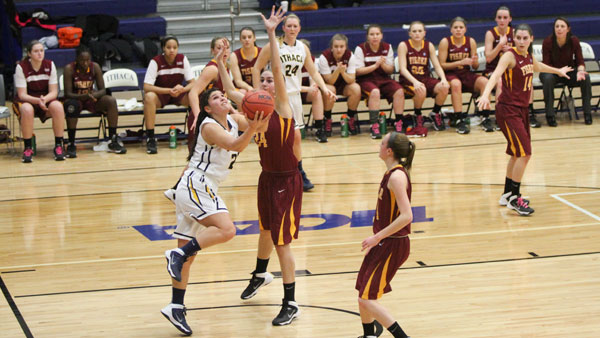 As women’s basketball head coach Dan Raymond walked off the court toward the locker room after his team won its home game against Stevens Institute of Technology on March 1, he was swarmed by reporters holding cameras, microphones and recorders. The Bombers had just won their third consecutive Empire 8 Conference Championship, and Raymond was set on advancing past the shortcomings of the last two seasons in the NCAA Tournament.

As the light from the camera shone in his eyes, all of the reporters asked the same question: “How does it feel to be Empire 8 Champions?” The Blue and Gold’s 63–51 win guaranteed them an invitation to participate in March Madness, and despite the frenzy that surrounded him and his players, he stayed calm, answering each question plainly while keeping the team’s goals in perspective.

With the conference title, the Bombers have accomplished a prerequisite feat that inches them closer to their ultimate goal of reaching the NCAA Championship game.

Raymond said though winning the Empire 8 Championship was a worthy accomplishment, he and the team have greater goals.

“It felt really good,” he said. “I don’t want to poo-poo it or anything like that, but for us it’s about getting to the NCAA Tournament and making some noise there. That was a necessary step for us to get there.”

Senior guard Mary Kate Tierney was named the tournament’s Most Valuable Player on March 1 after the victory. Tierney averaged 18 points, 11 rebounds, 4 1/2 assists and two steals during her two-game tournament play.

Tierney said the caliber of opponents the team faced in the E8 tournament gave it the realization that every team left competing is talented, and regular season statistics and records hold no significance anymore.

“It opened our eyes,” she said. “When it comes to playoff time, everybody comes ready to play. It’s a whole new season and everyone is 0–0.”

The Bombers were the No. 1 seed going into the conference tournament, and they defeated St. John Fisher College 73–69 in the semifinal round before their win against Stevens the following day. In both games, the Bombers got off to slow starts. They began the game with eight-point deficits against the Cardinals and the Ducks before ultimately rallying back for wins.

“There were times when our offense kind of went stagnant,” he said. “So it’s helping our kids understand what to look for when they’re not recognizing what’s happening on the floor. For the most part, they do a great job, but there were times where they kind of thought, ‘What are we doing?’ and they just stood around — that’s not us.”

The Bombers’ next opponent, The Sage Colleges, comes into the NCAA Tournament on a four-game winning streak. The Gators are making their first NCAA Tournament berth in the program’s history, and at the helm is head coach Jackie Craft. Junior point guard Megan Bowman is leading the team with 12.8 points per game and 5.4 assists. She was chosen for the Skyline All-Conference first team and was also named the Skyline Conference Championship Tournament’s Most Outstanding Player after its title victory.

Per the Skyline Conference’s rules, Sage was given access to two Bomber game films in preparation for the upcoming game. At just under 61 points, the Gators surrendered the least amount of points per contest of all teams in the Skyline Conference. Craft said the size, speed and tenacity her team possesses on the defensive side of the ball should give them a chance to win.

“We’re a fast-paced team,” she said. “I think we’ll match up pretty well size-wise, we’re not very small and I know Ithaca isn’t huge. We will try to beat you by just making you uncomfortable on the offensive end.”

Junior forward Francesca Cotrupe said the E8 Championship was a great accomplishment, but the Blue and Gold need to stick to their identity as an upbeat team to avoid becoming complacent for their upcoming game in the first round of the NCAA Tournament.

“Every team is different, so we approach every team based on what they do best,” she said. “If we play strong defense — our offense is just going to come from that.”