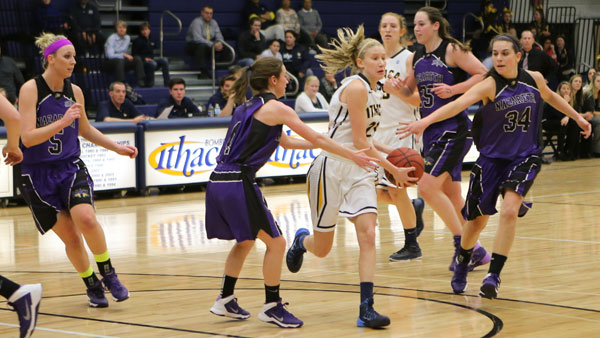 The women’s basketball team scored 37 points from players off the bench Feb. 7, as it defeated the visiting Nazareth College Golden Flyers 75–50 in Ben Light Gymnasium.

The Blue and Gold’s defense smothered Nazareth’s shooters, keeping the Golden Flyers from hitting a 3-point shot until four minutes into the second half. Campbell said the team focused on perimeter defense because of Nazareth’s ability to make long-distance shots.

“They average seven made 3-pointers a game, so one of our goals before the game was actually to keep them under five,” she said. “It seemed to work out well.”

This game was the second contest between the two teams this season. The Bombers won 63–54 in the previous game Jan. 18. The Flyers shot 6–22 from 3-point range in the first matchup. The first time around, the Blue and Gold got 19 points from bench players — just more than half scored by the bench in the rematch.

Tierney said the team’s depth off the bench has been one of its most important assets.

“It’s a great feeling to know that we are 15 players deep,” she said. “Everyone got in and played really well. That’s something that is really special about this team. We can go that deep, and everyone can contribute on some level.”

Freshman forward Erin Ferguson led all bench players in scoring with nine points. Sophomore Kristen Gowdy tallied eight points, as she knocked down her first two 3-pointers of the season.

Freshman guard Ali Ricchiuti said the team’s scoring ability off the bench will separate it from the competition, as the team nears post-season play.

“I think that’s what going to help us futher in the playoffs, because I don’t think many teams have as deep a bench as we do,” she said.