Bomber for Life: Former student-athletes are returning to campus as assistant coaches 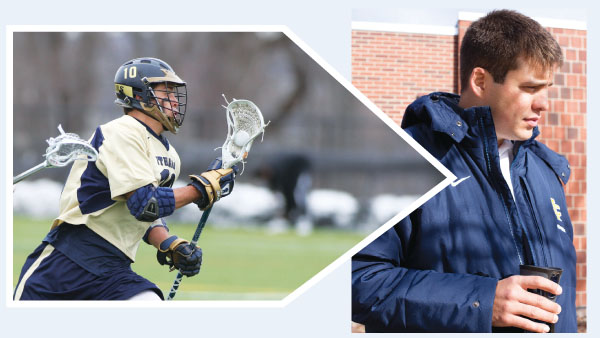 Former lacrosse player Michael Silipo ’11 received a cryptic text message from one of the assistant coaches of the men’s lacrosse team, Rich Barnes, on Jan. 13.

“Step up and do the right thing,” the text read.

Silipo was confused, but shrugged it off. Then, he received another message. This time it was from the head coach of the men’s lacrosse team, Jeffrey Long.

“Make sure to check your email,” Long said.

Not only was the text message suspicious, but it was strange because, as Silipo said, Coach Long is as “old-school” as they come. Silipo, who was formerly an assistant lacrosse and football coach at Williams College, had finished running a meeting with his lacrosse players. He checked his email, and there it was: an email from Coach Long explaining that he was looking to hire a full-time assistant and wanted to know if Silipo would be interested in the job.

Silipo was able to make arrangements, sign a four-month lease, pack his belongings and leave Geneva, N.Y., for Ithaca College. Though Silipo loved his role as a two-sport assistant at Williams, he was ready to return to the college.

“The only job I would have left Williams for was Ithaca College,” Silipo said. “I can say that with a 100 percent confidence because I didn’t want to leave Williams, a place where I had so much responsibility and so much impact on every single game, for a place where I’d be going down a notch.

Silipo doesn’t consider his role at the college to be a downgrade because he currently manages plenty of responsibilities.

“He is involved with all aspects of the team management: on-field coaching at both ends, conditioning, mental preparation, scouting and recruiting,” Long said.

However, Silipo’s favorite part of being a coach is the opportunity to have such a great impact on the lives of his players.

“Winning is what people think we do it for, and definitely, winning is fun,” Silipo said.

The below-freezing temperatures and the lack of sun at the college may make students readily await graduation. But for alumni like former All-American swimmer Carly Jones ‘13 who have decided to return, the college has become the home they never imagined.

“I know where to go,” Jones said. “I know all the good spots in town.”

Jones, now an assistant coach for the women’s swimming and diving team, graduated with a Bachelor’s Degree in sociology. Her original plans after graduation were not much different than anyone else’s: graduate, find a job and dive into adulthood. But Jones, who was a member of the swimming team all four years at the college, said she found it difficult to separate herself from the sport she had competed in since third grade.

“I felt so invested in the team, and I wanted them to do well,” Jones said. “I couldn’t really think of anything else that I wanted to do.”

After learning that a position might open up as an assistant coach, she told her former head coach Paula Miller she was interested. Her impressive resume, which included volunteering with her high school team during school breaks and serving as a swimming instructor to younger kids, landed her the job when the position opened up shortly after graduation. Jones, who did not have a job straight out of college, said she was ecstatic, even though her role as an assistant coach took adjustment.

“When practice would roll around, instead of changing and getting in, I would be sitting on the deck instead of working out with all the girls,” Jones said. “I was the one giving them the workout. I’ve gotten used to it, definitely.”

For former student-athletes like Katherine Bixby ‘10, who played basketball, coaching is a great way to contribute to their sport after being physically exhausted from it.

“I was more than ready to give my body a rest and hang my shoes up,” Bixby said. “Coaching was an excellent next step. It’s the perfect combination of my interests and passions in life.”

Like Jones, Bixby’s extensive resume helped her land an assistant coaching position. Prior to coaching the Bombers, she was an assistant coach at Ithaca High School and at different basketball camps. She received her Masters Degree in 2012 from the college and plans to teach biology. Though her decision to become a coach may seem to have diverged from her original plans of teaching biology, coaching gives her the opportunity to teach as well. As an assistant, Bixby helped lead the Blue and Gold to the Elite 8 of the NCAA Tournament.

Assistant coaches no longer have to worry about taking classes and studying for midterms. Their responsibilities have evolved and now, they worry about recruits, workout regimens, fundraising and piles of paperwork.

Aside from the sport itself, former athletes coach at their alma mater because of the college’s intellectual atmosphere, Bixby said.

But Silipo said former players like him come back to coach because, throughout their undergraduate years, they learned to love the college community.

“It’s just something about maybe the water here, the [lack of sun] from November to March [that] makes you love the place so much,” he said.

During his undergraduate years, Silipo worked for Coach Long in the athletic office. Through their daily interaction at practices, games and work, Silipo said he developed more of a father-son relationship with Long.

“Coach [Long] is probably the biggest mentor in my life, besides my father,” Silipo said.

Silipo, who wants to follow in the footsteps of Long and become the head coach of the men’s lacrosse team, was partially influenced by Long to return to the college. Long has been teaching and preparing Silipo to replace him when the opportunity comes along.

“We are both feeding off each other,” Long said. “He brings in three years of knowledge and experience in the New England Small College Athletic Conference league, which is one of the best in the country. We are approaching this season with a ‘co-coach’ mentality and are both learning from each other.”

Silipo, Bixby and Jones guide their players, and sometimes even former teammates, through monumental parts of collegiate athletes’ lives and careers, like first and last college games and first and last college classes. Silipo said he wanted to be part of the athletic tradition, and he wants to see the tradition of excellence continue.