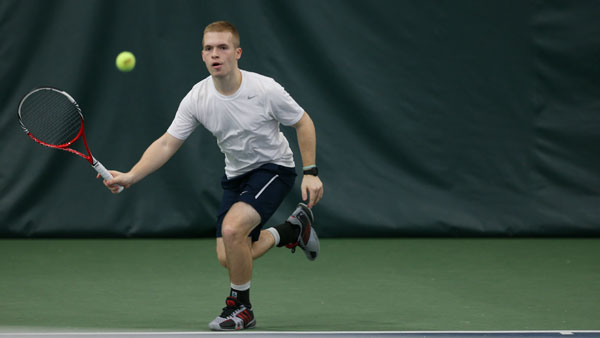 The women’s lacrosse team edged out Union College in a 12–11 contest April 1 in Schenectady, N.Y., to reach the .500 mark for the first time this season.

It was a back and forth affair between the South Hill squad and the Dutchwomen, as the teams traded the lead three times during the game.

The Blue and Gold return to action at noon April 5 at Higgins Stadium to take on the Houghton College Highlanders.

The men’s tennis team lost an 8–1 contest to the No. 12–ranked Stevens Institute of Technology on March 29 at Cornell University’s Reis Tennis Center.

The Bombers lost all three doubles matches, as junior Justin Levine and sophomore Zach Passman were defeated by a score of 8–3. Senior David Andersen and freshman Wes Davis lost 8–2, and sophomore Chris Hayes and senior Griffin Reid were defeated 8–1.

Davis had the Bombers’ only win of the day, sweeping his singles match by a score of 6–0, 6–2. Andersen lost his first set 6–4 but rallied to win the second set. Anderson could not complete the comeback, however, losing the third set.

The Blue and Gold are set to face Hartwick College at noon April 5 at the Wheeler Tennis Courts.

The baseball team improved its record to 9–4 with a four-game sweep of the Houghton College Highlanders. The Bombers and Highlanders played doubleheaders against each other March 27 and 29.

The Bombers won the first contest 7–1 and won the remaining three games 5–2. In doing so, the South Hill squad extended its winning streak to five games.

The Bombers’ bats were hot in game one, propelling them to an early 3–0 lead in the first inning. They added four runs in the fourth inning to secure the victory. Junior pitcher John Prendergast struck out seven batters, allowing one hit and no runs in five innings pitched.

In game two, the Bombers again jumped out to a 2–0 lead and never looked back. First baseman Colby Gee went 3–4 at the plate for the Blue and Gold. Sophomore pitcher Benji Parkes collected his first win of the season, allowing one run and no walks.

Sophomore pitcher Brandon Diorio captured his first win of the season in game three, allowing just three hits, an unearned run and a walk in 4.1 innings pitched. The Bombers scored three runs in the fifth inning to secure the victory.

Junior pitcher Andrew Sanders completed the four-game sweep of the Highlanders by picking up the win, giving up two runs in seven innings. Junior closing pitcher Jimmy Wagner collected his second save of the year with two scoreless innings.

Sophomore outfielder John Stanley hit two triples, knocking in two runs and scoring once. The Bombers scored one run in the first, fourth and sixth innings, along with two insurance runs in the seventh inning.

The Blue and Gold return to the diamond with a four-game set against Stevens Institute of Technology from April 5–6 in Hoboken, N.J.

The Blue and Gold took an early lead but allowed five consecutive goals, giving the Cardinals a 6–3 lead at the end of the first half. However, the Bombers rallied with eight second-half goals, including three scores by senior midfielder Jake Long.

The Blue and Gold faced the No. 3–ranked Cabrini College on March 29, but lost a 20–11 contest to the Cavaliers.

Despite trailing 4–2 at the end of the first quarter, Cabrini’s offense had two seven-goal quarters, coming back from a deficit in the second half to lead 9–5. The Bombers’ offense couldn’t answer the goals and only scored four times in the fourth quarter.

The Blue and Gold will face the Houghton College Highlanders at 3 p.m. April 5 at Higgins Stadium in the second of four straight games at home.