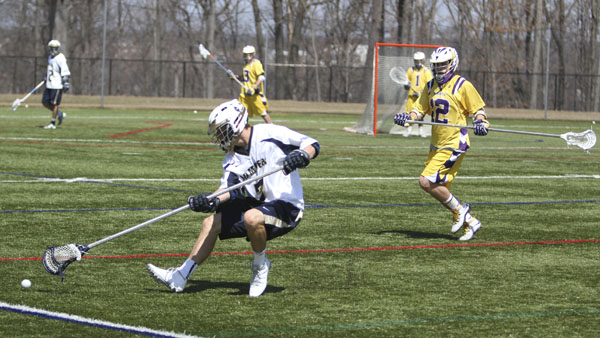 The No. 12–ranked Bombers’ men’s lacrosse team defeated Nazareth College 10–8 on April 12, giving the Golden Flyers their first Empire 8 conference loss of the season. With a 4–0 conference record, the Blue and Gold are now at the top of the standings in the Empire 8.

The rivalry between the Bombers and Golden Flyers dates back to 1990, and this year’s contest was a rematch of the 2013 conference tournament finals, where Nazareth defeated the Bombers 12–10 in the 2013 Empire 8 title game.

Junior attack James Manilla only tallied one assist in the game, but the Rochester, N.Y., native said this game was an important measuring stick for the Bombers’ success so far this season. He also said the stakes of the matchup seem to be higher when the two teams clash.

“Nazareth is right in my backyard, and I go there sometimes to get practice in,” he said. “Today was more of a personal game.”

Both teams scored two goals in the second quarter and went into halftime tied 5–5.

Freshman attackman John Januszkiewicz scored his 31st goal in the third quarter. Though he wasn’t a part of the team last year for the Empire 8 Championship loss, he knew going into the game that it was important to defeat the Golden Flyers.

“We just had to play fast and play with all of our heart,” he said. “Our team wanted revenge on the championship game last year.”

The Golden Flyers never attained another lead in the second half. Long secured his hat trick early in the third quarter, followed by another goal from Slawta three minutes later. The Bombers were up 7–5 when senior midfielder Colin Clark scored to bring the Golden Flyers within one point. A goal by Januszkiewicz put the Blue and Gold up 8–6, and later senior midfielder Andrew Kristy scored to put the Bombers up 9–7.

Senior attackman Joe Perkins scored in the fourth quarter to put the Bombers ahead 10–7, which allowed the team to maintain possession for the final minutes to finish with the 10–8 win.

Head coach Jeff Long said he credits his team’s ability to maintain the ball for its win.

“When you look at the stats, it’s all about the turnovers,” he said. “We possessed the ball a little bit. We really had a great stand at the end, defensively.”