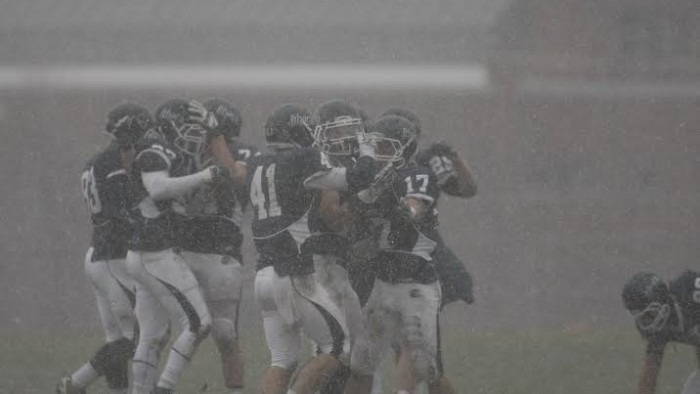 Boffoli redeemed himself Nov. 23, as he caught the game-winning touchdown with 3:32 left in the game, giving the Blue and Gold a dramatic 20–17 win against Framingham State University in the first round of the NCAA tournament at Butterfield Stadium.

Boffoli made a leap in the back corner of the endzone for junior quarterback Tom Dempsey’s pass and managed to get a foot in bounds to cap off a second-half rally for the Bombers. Boffoli said he was putting his fumble last week in the past.

“It’s just a football game, you know,” Boffoli said. “We’re out there having fun, and I made the catch after Tommy threw a great ball.”
The Bombers outscored the Rams 17–0 in the second half after a lethargic effort in the first half put them in a 17–3 deficit at halftime. Bombers’ head coach Mike Welch said he did not say much to his team at halftime.

“[The speech] was simple,” Welch said. “We didn’t play a very good first half, and it was totally uncharacteristic of what we do. I didn’t have to yell or scream or holler.”

The wind aided the Bombers’ second half rally, as the Rams were forced to punt twice — both punts less than 25 yards. The first punt led to a 16-yard touchdown reception from senior tight end Jared Prugar over the middle, while the second led to a 36-yard field goal from sophomore kicker Max Rottenecker. These scores cut the Rams’ lead to four early in the fourth quarter.

The Bombers began their winning drive after halting the Rams on fourth down. They got some help through two costly Framingham penalties before marching the ball down inside the Rams’ five. Two runs from senior running back Rakim Jones moved the Bombers back before Dempsey found Boffoli for the go-ahead touchdown. Dempsey credited the team’s resilience as the contributing factor to the Blue and Gold’s rally.

“This is a tight-knit group,” Dempsey said. “This is the tightest group I’ve ever played with. We’re so close in everything — on the field, off the field. Everyone had that camaraderie that makes things work.”

The Bombers will play Wesley College in the second round game at noon Saturday at Miller Stadium in Dover, Del.