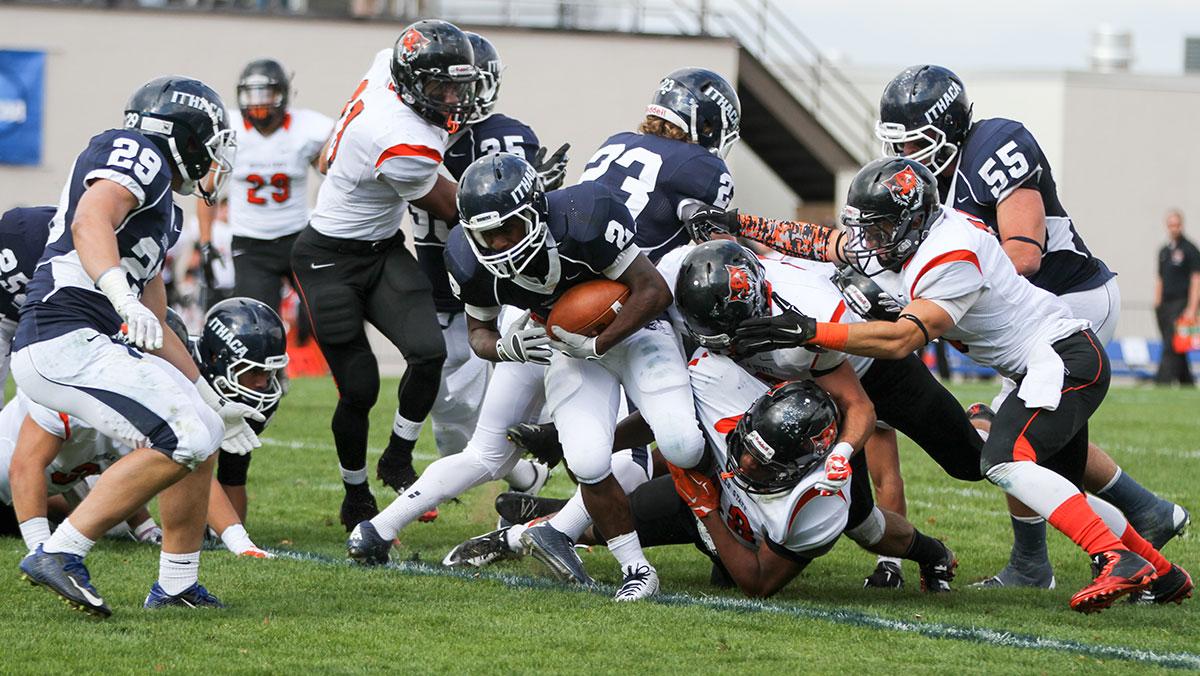 If hindsight is 20/20 then the football team’s lack of foresight will reveal itself when it examines its 38–27 loss to the Buffalo State Bengals on Oct. 11 at Butterfield Stadium.

The Bombers (4–1, 3–1) committed five turnovers and had no answer for the Bengals when they replaced sophomore Kyle Hoppy with junior Dan Serignese at quarterback in the second quarter. Serignese threw for 155 yards and three touchdowns as the Bengals scored 31 unanswered points in less than 20 minutes to pull away from the South Hill squad and gain first place in the Empire 8.

Senior quarterback Tom Dempsey threw three interceptions and fumbled on the Bengals 1-yard line. Two of his interceptions were ran back for touchdowns, and Dempsey’s other interception was in the Bengals’ end zone, providing the difference in the game. Dempsey said his mistakes and the rest of the team’s proved costly.

“Before we can take care of an opponent, we have to make sure we don’t beat ourselves and that’s what happened this week,” Dempsey said.

The Bengals scored 24 of their points off of Bombers turnovers, including the decisive touchdown in the third quarter when Serignese found senior wide receiver Mike Doherty for a 14-yard touchdown after Bombers freshman running back Tristan Brown fumbled. Bengals head coach Jerry Boyes credited his opportunistic defense for turning the game around.

“Some guys will play it safe and let the wide receivers make the catch, then make the tackle,” Boyes said. “I like guys who go after the ball and play aggressive. Look at the turnovers and the impact they had. The defense scored 12 points.”

Though Boyes was a coach with the Bombers before moving to Buffalo State, he did not credit any familiarity he had with the program as being a contributing factor to the Bengals’ victory. Nevertheless, in three Empire 8 games, the Bengals have won two of them and came within a minute of beating the Blue and Gold in the other game. Bombers junior wide receiver Josh Oliver, who also lost a fumble on a muffed punt, said the Bombers overlooked the Bengals.

“We were ranked and we probably got ahead of ourselves and looked past them,” Oliver said. “We got outcoached and outplayed, and they just played better ball than us today.”

While Dempsey’s first and third interceptions were ran back for touchdowns, it was his second interception that swung the game away from the Bombers. Senior safety Anthony Domenick had just intercepted a Hoppy pass and returned the ball inside the Bengals 20 to give the Bombers a chance to extend on a 17–7 lead before Dempsey threw an interception to Bengals junior defensive back Mitch Thomas in the end zone on third down. Serignese took over at quarterback for the Bengals on the next series and led an 80-yard drive to begin the scoring run and reduce the Bombers lead to three before halftime. Bombers head coach Mike Welch said the team’s mistakes were fundamental errors.

“Those are breakdowns that haven’t happened but happened today,” Welch said. “It’s a tough one to figure out.”

The Bengals, Bombers and the St. John Fisher Cardinals all sit atop the Empire 8 with 3–1 conference records. The Blue and Gold will next play at Frostburg State University on Oct. 18 in Frostburg, Maryland.