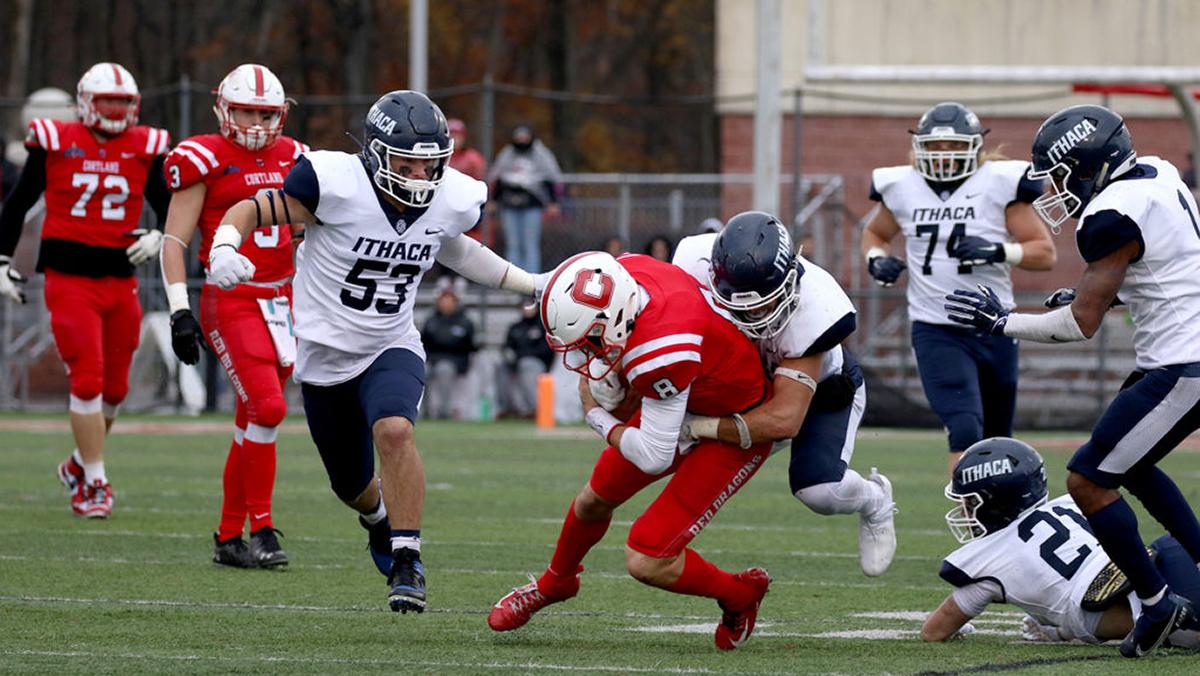 The Ithaca College and SUNY Cortland football teams treated fans to a thriller, battling through rain and snow in the 62nd Cortaca Jug game Nov. 13 in Cortland. Ultimately, the Bombers fell to the Red Dragons 28–27, snapping the Bombers’ three-game winning streak for the jug game.

The loss dropped the Bombers’ record to 8–2 and put a close on their season, while it capped off the Red Dragons’ first undefeated regular season since 1988. Although the South Hill squad’s winning streak was broken, it is still 42–34–3 in the series. While the game did not draw a record-setting crowd like it did at MetLife Stadium in the teams’ previous meeting, 8,642 fans made their way to the SUNY Cortland Stadium Complex to take in the action.

“The team did everything I asked them to do,” Swanstrom said. “I love this team, I love coaching them and my heart breaks for them.”

On the other side of the field, Fitzpatrick said his first time coaching in the rivalry lived up to his expectations.

“This was an unbelievable game [and] an unbelievable atmosphere,” Fitzpatrick said. “The crowd was electric today. Two great teams battling it out and it comes down to a one–point game late in the fourth quarter, I think that’s fitting for how this game should be.”

On the fourth drive of the game, the Red Dragons got on the board first with 6:59 remaining in the first quarter to go up 7–0. The Red Dragons were able to drive down the field after two runs got them into Bombers territory, and Red Dragons’ quarterback Brees Segala tossed it to Trevor Ash for a 10-yard touchdown.

The Bombers responded by getting into Red Dragon territory for the first time in the game, with a big passing play of 32-yards from junior quarterback A.J. Wingfield to senior wide receiver Michael Anderson. Junior kicker Nick Bahamonde was good from 45-yards, getting the Bombers on the board. SUNY Cortland led 7–3 with 4:21 remaining in the first quarter.

SUNY Cortland converted on its second trip to the red zone with a 7-yard touchdown pass from Segala to JJ Laap. The Red Dragons led 14-3 with 14:06 left in the first half.

Segala stepped up for the Red Dragons in the big game, throwing for 175 passing yards and three touchdowns. Segala said after being at a neutral environment in 2019, instead of having it in Cortland or Ithaca, and not having the game in 2020, it was good to be playing at home again.

“I would take a home game in Cortland over anywhere else,” Segala said. “Our fans, you heard them all game long, and the atmosphere of the college campus is just different. It was awesome to be in MetLife [Stadium], it’ll be awesome to be at Yankee [Stadium], but nothing beats going out here getting the jugs in front of your family, your fellow students, in front of your faculty.”

The game also presented an opportunity for alumni to return and cheer on their respective institutions in what was once called “the biggest little game in the nation.” Mike White ’92, who was also a team captain for the Bombers 1991 national championship team, said the Cortaca Jug is an eternal event that will always produce a crowd.

“We could play [the Cortaca Jug game] in a parking lot and we would still have the same rivalry,” White said. “It doesn’t matter where you play it. It’s the spirit that happens on the field that’s important and that continues and nothing stops Cortaca.”

Down two possessions early, the Bombers converted on fourth down from midfield to keep their drive alive. However, the drive stalled at the Red Dragons’ eight yard line. Bahamonde’s 25-yard field goal attempt was good, closing the gap and making the score 14–6 with 9:31 left in the second quarter.

The Bombers started their drive with a 14-yard completion to graduate student wide receiver Andrew Vito and Wingfield found senior wide receiver Billy Tedeschi to get into Red Dragon territory. However, Wingfield was sacked for 11-yards and the Bombers were forced to punt with just under one minute left in the first half. The Red Dragons gained possession with 45 seconds left from their own 25-yard line.

The Bombers struck first in the second half, trimming their deficit to 14–13. Sophomore running back Jalen Hines found his way to the end zone on a 2-yard touchdown rush with 9:12 remaining in the third quarter. The score came at the end of a drive, in which the squad moved 79 yards down the field in nine plays.

The South Hill squad took its first lead of the afternoon on a 19-yard touchdown rush by Wingfield. The quarterback managed to sneak into the right corner of the end zone with 7:12 left in the quarter. Bahamonde tacked on another point by converting the PAT, giving the Bombers a 20–14 lead.

Shortly after the Red Dragons got the ball back, senior defensive lineman Nathaniel Potts intercepted Segala’s pass at Cortland’s 36-yard line. Wingfield then completed a 9-yard touchdown pass to junior tight end Dan Mason to put the Bombers on top 27–14 with 5:45 left in the third quarter.

Wingfield made his first appearance in the Cortaca Jug game this year after being on the sidelines in 2019. While he said he was still digesting the overall experience of the game and the environment, the game was a battle of back-and-forth surges.

“We just had to keep fighting,” Wingfield said. “I was happy with how we came out in the second half, kind of punching them back. Credit to them, they came back and punched us back. It came down to another field goal, and we’re gonna be alright. But, we fought, I’m proud of this team and good for [SUNY] Cortland.” 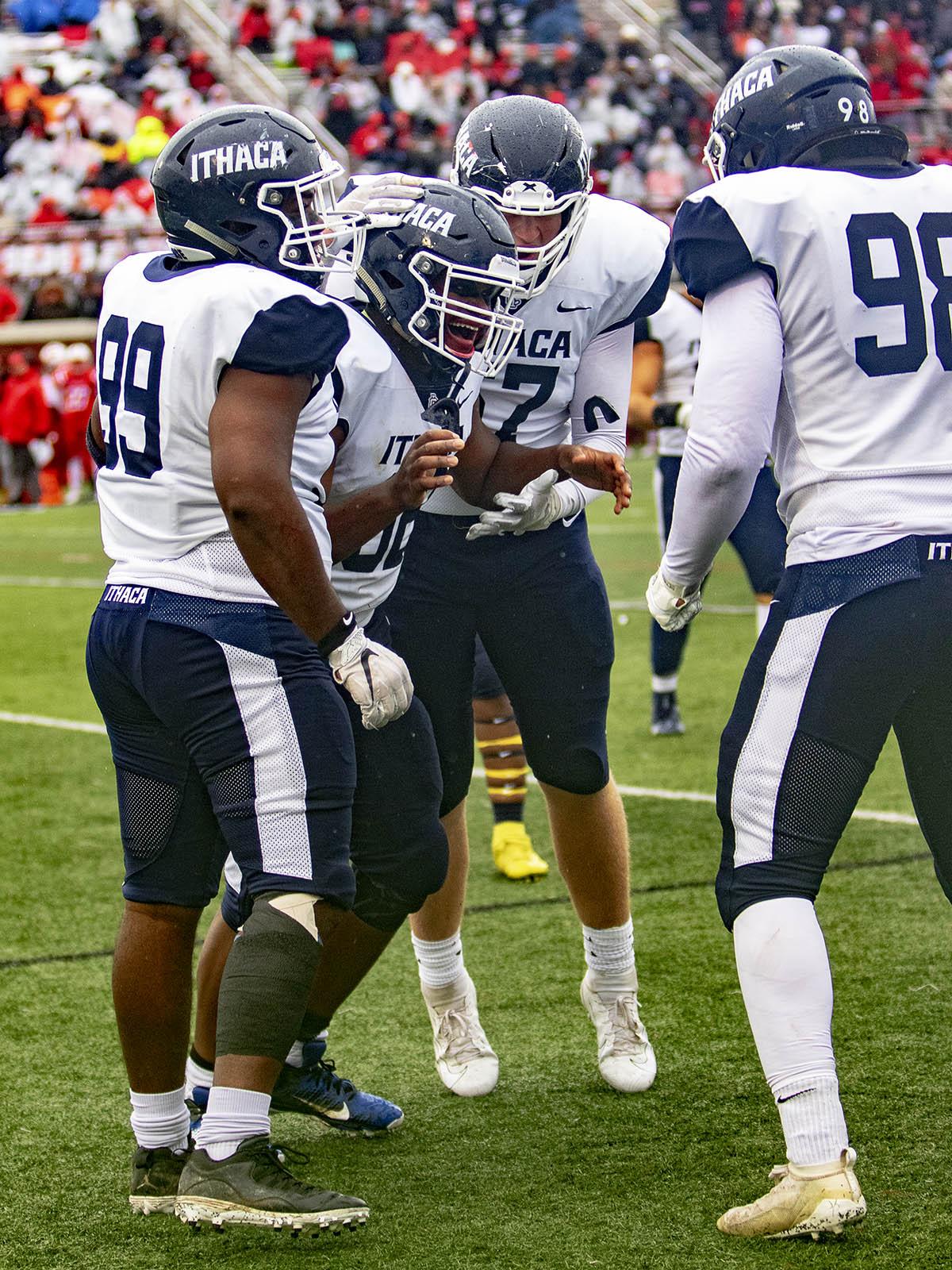 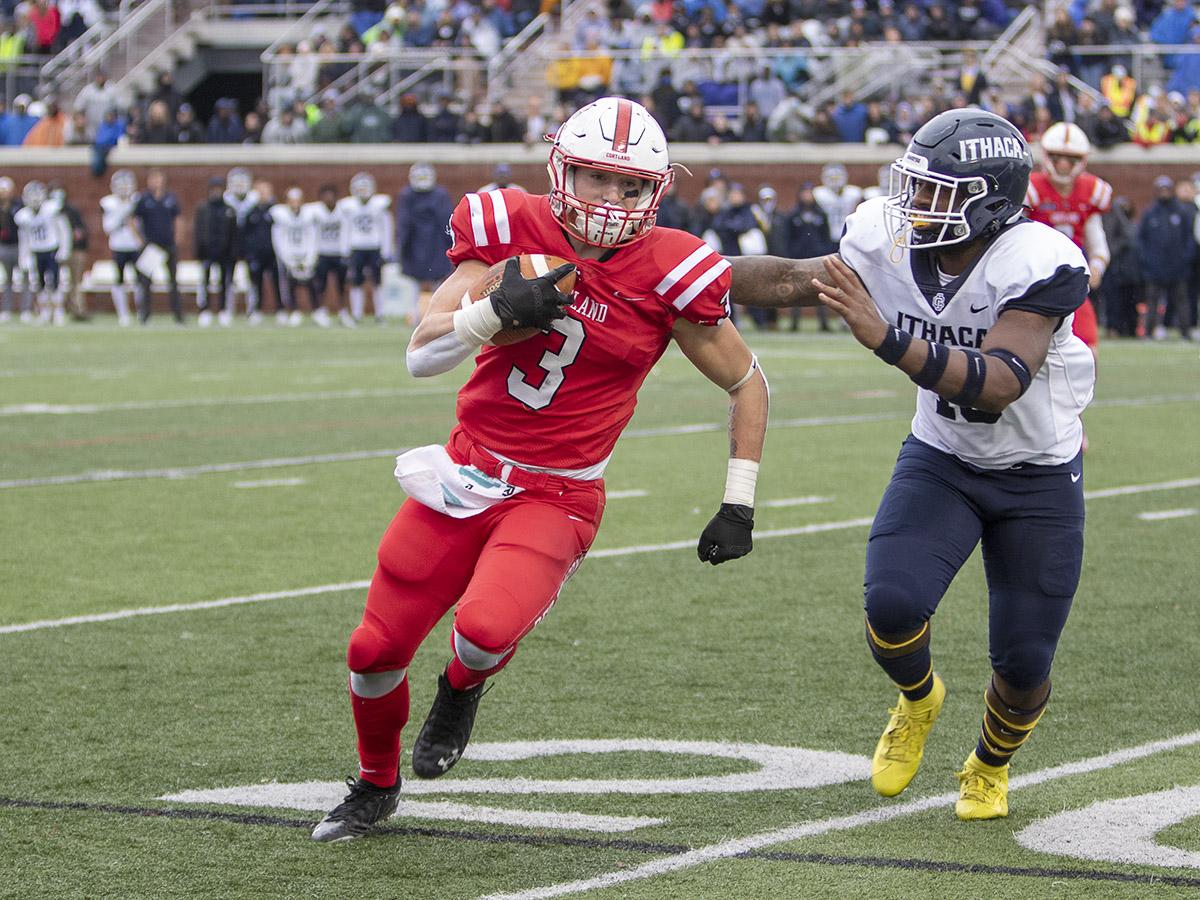 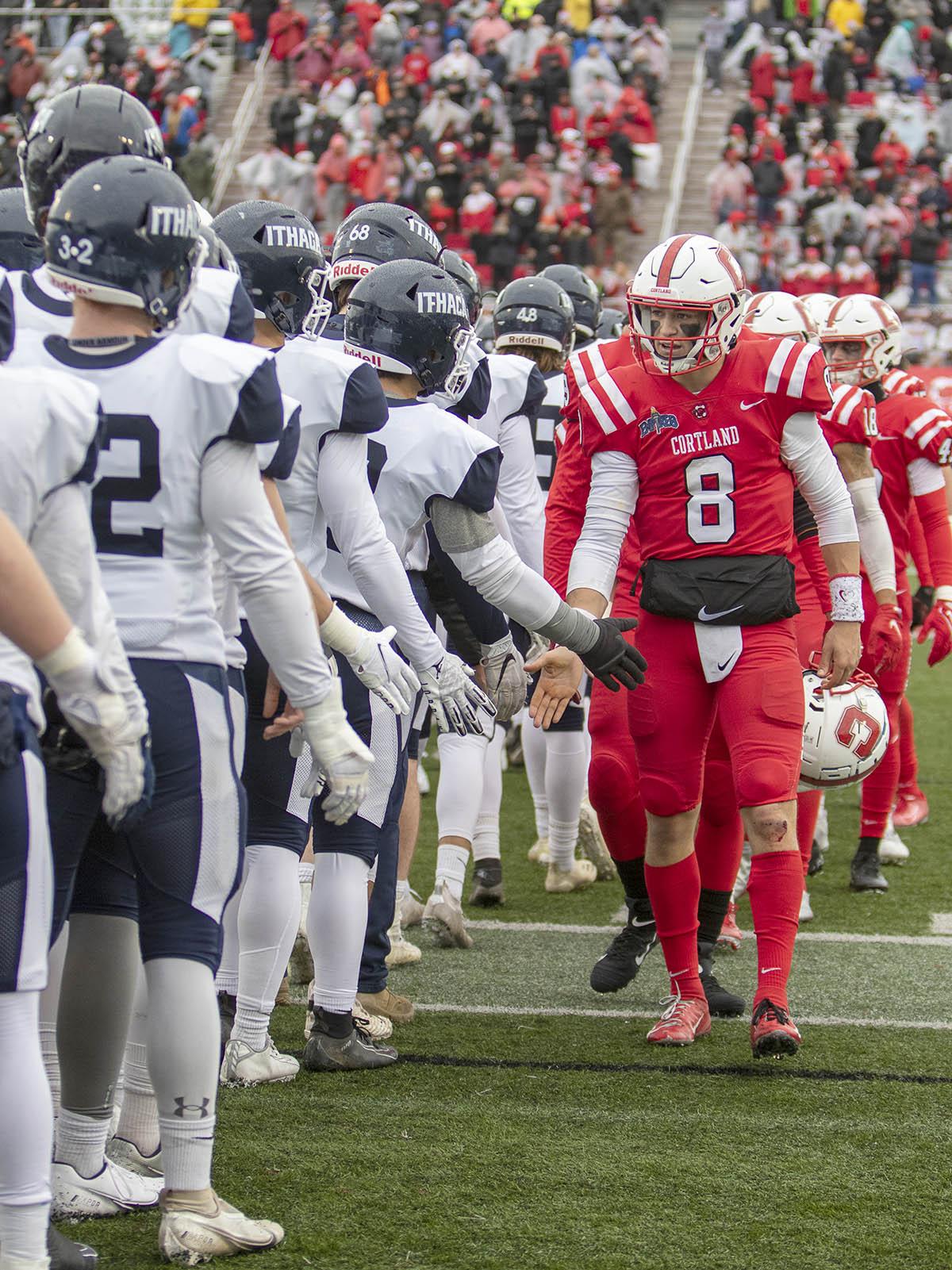 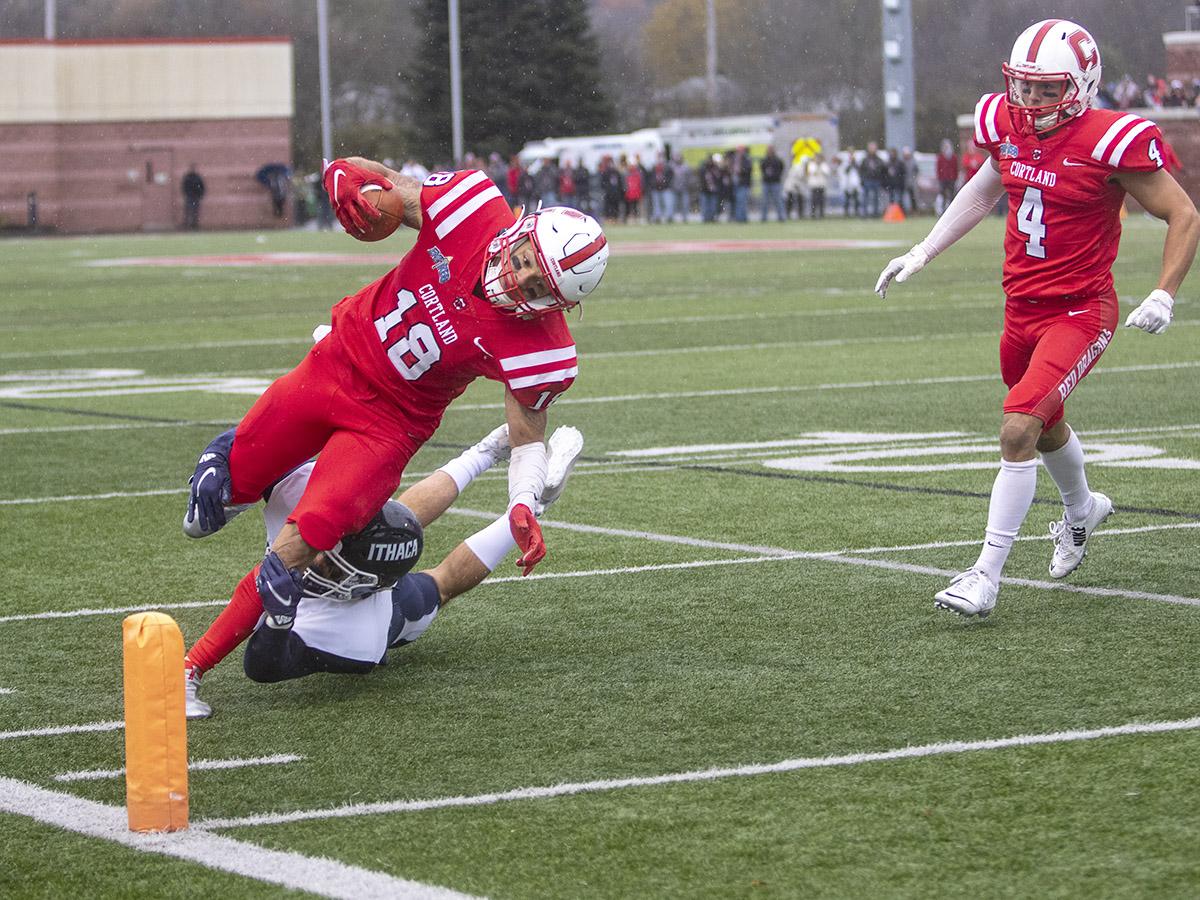 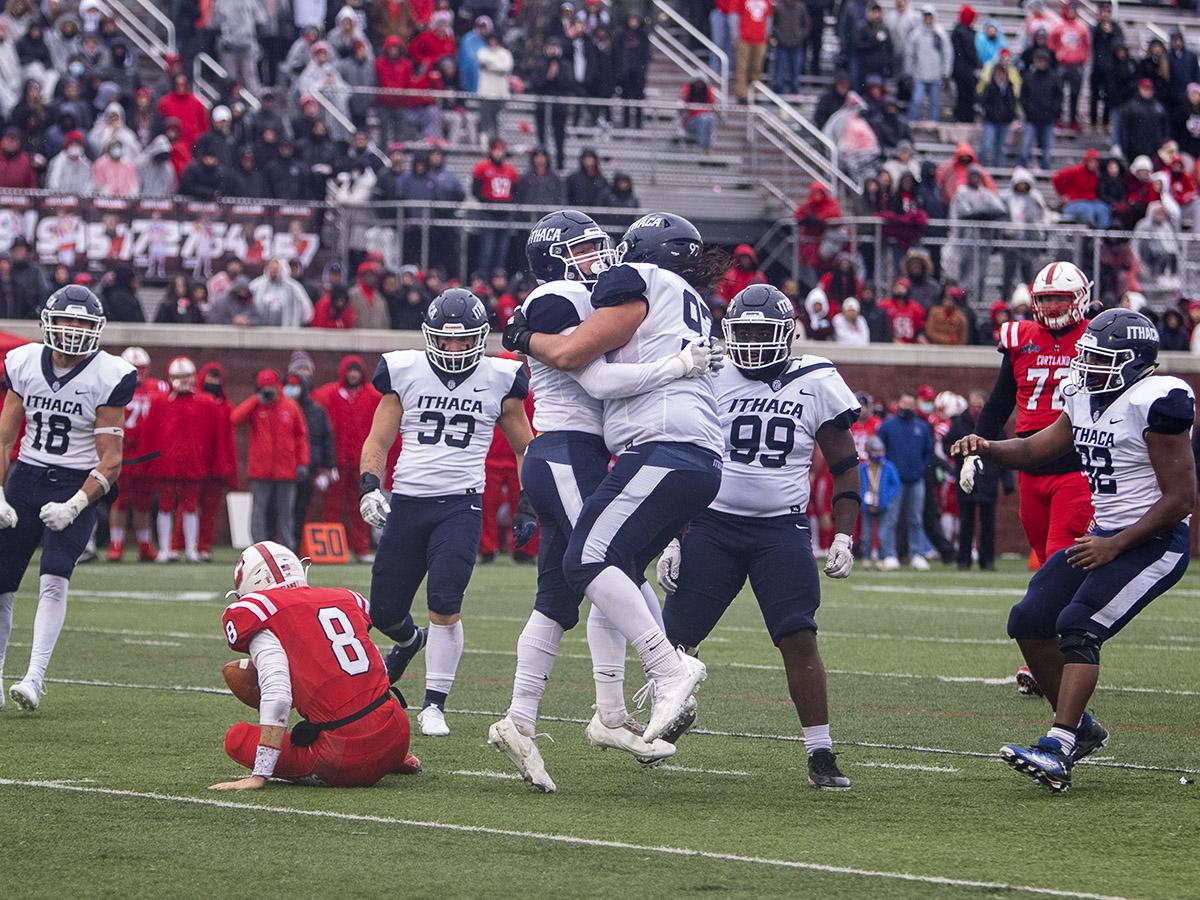 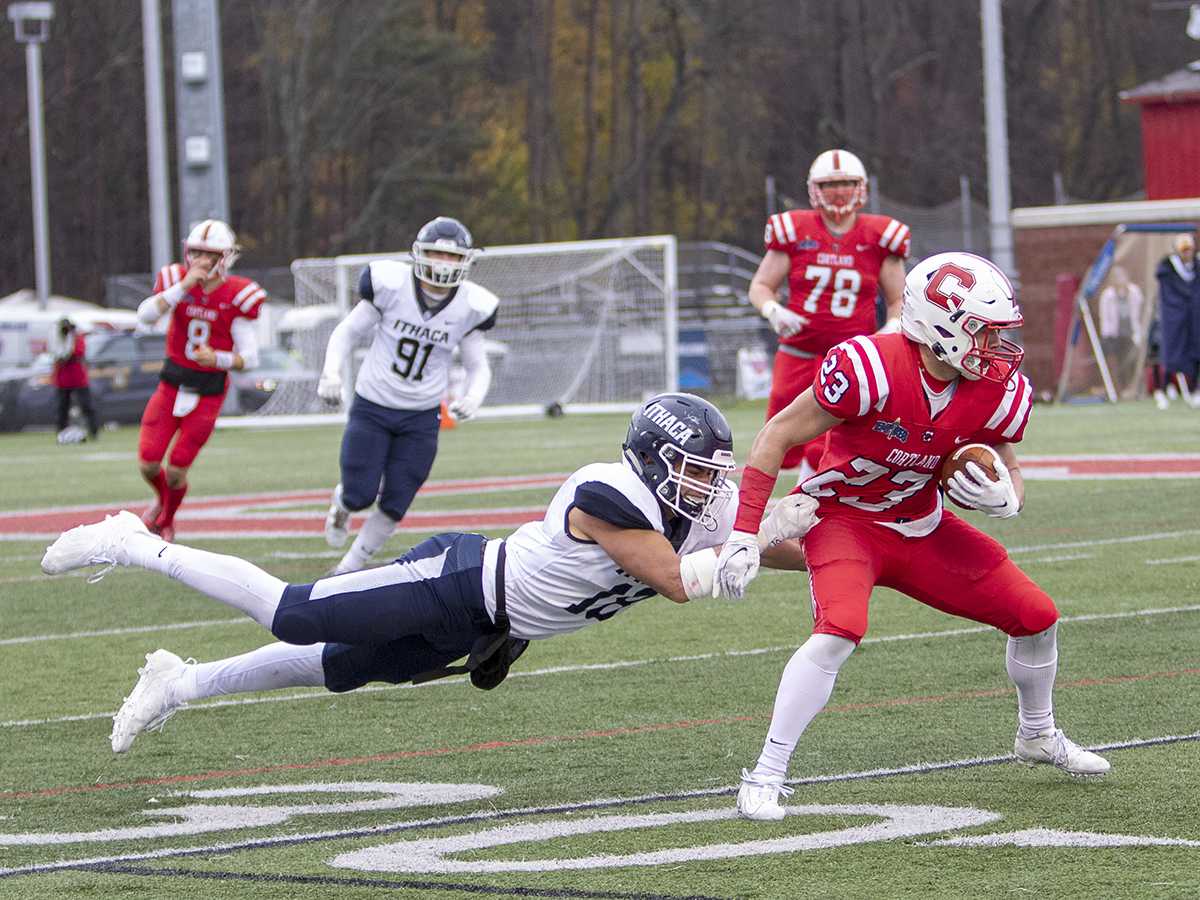 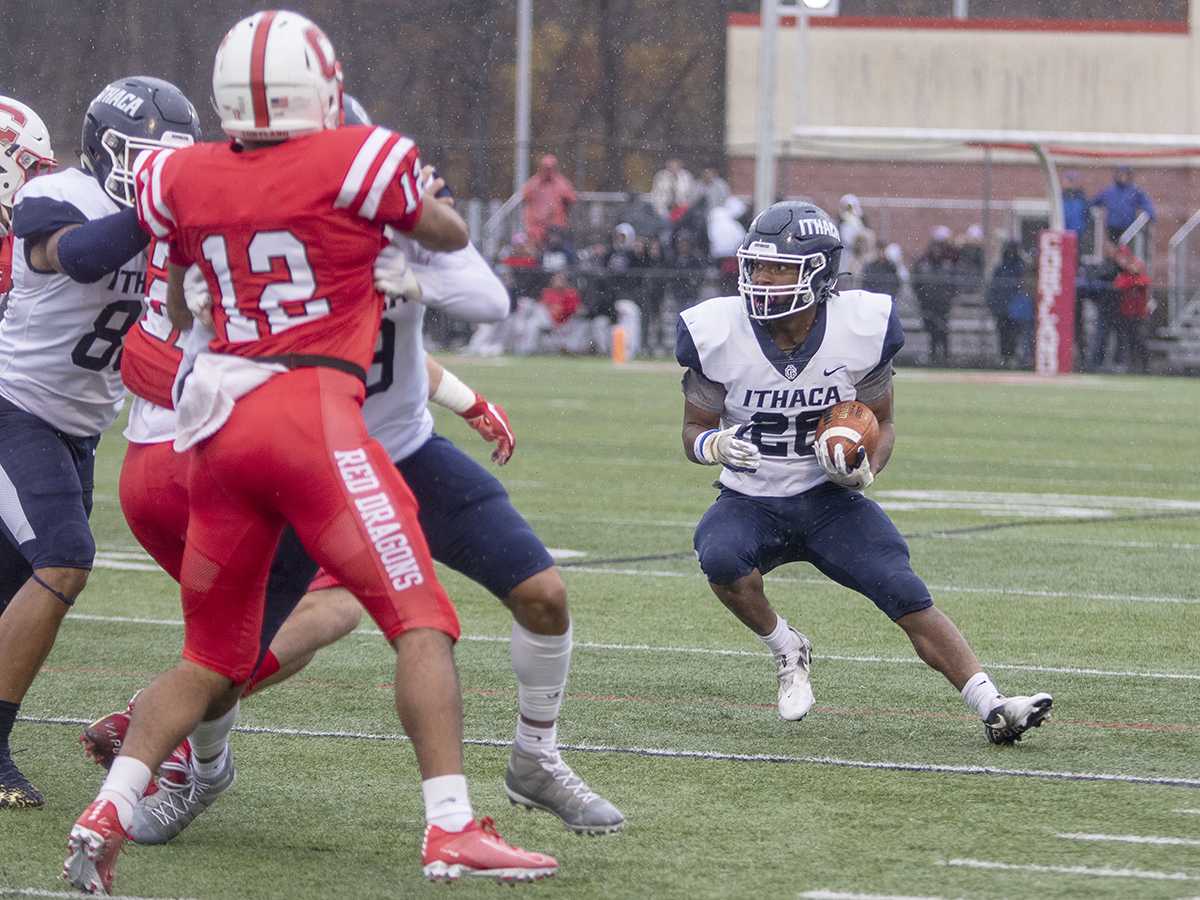 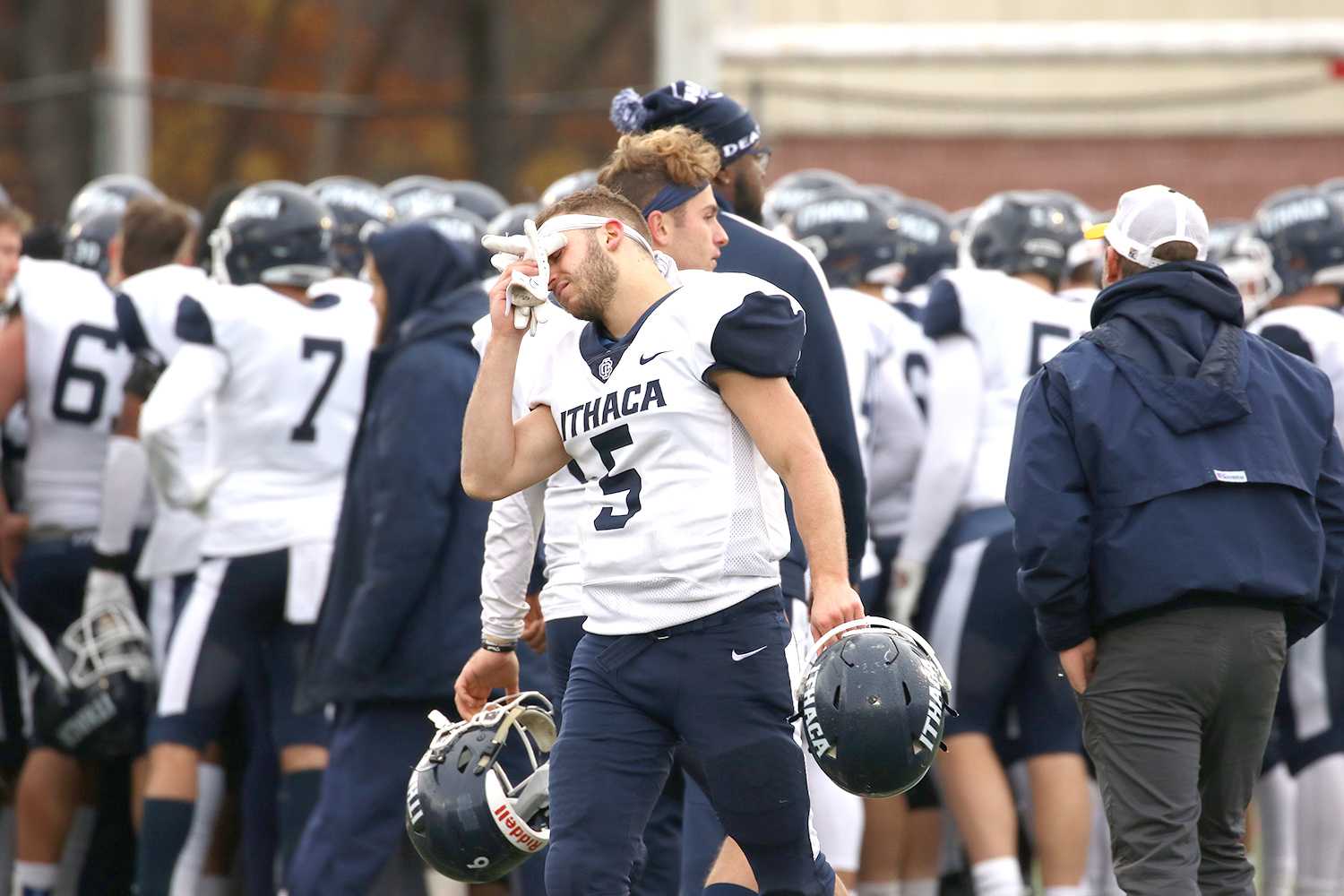 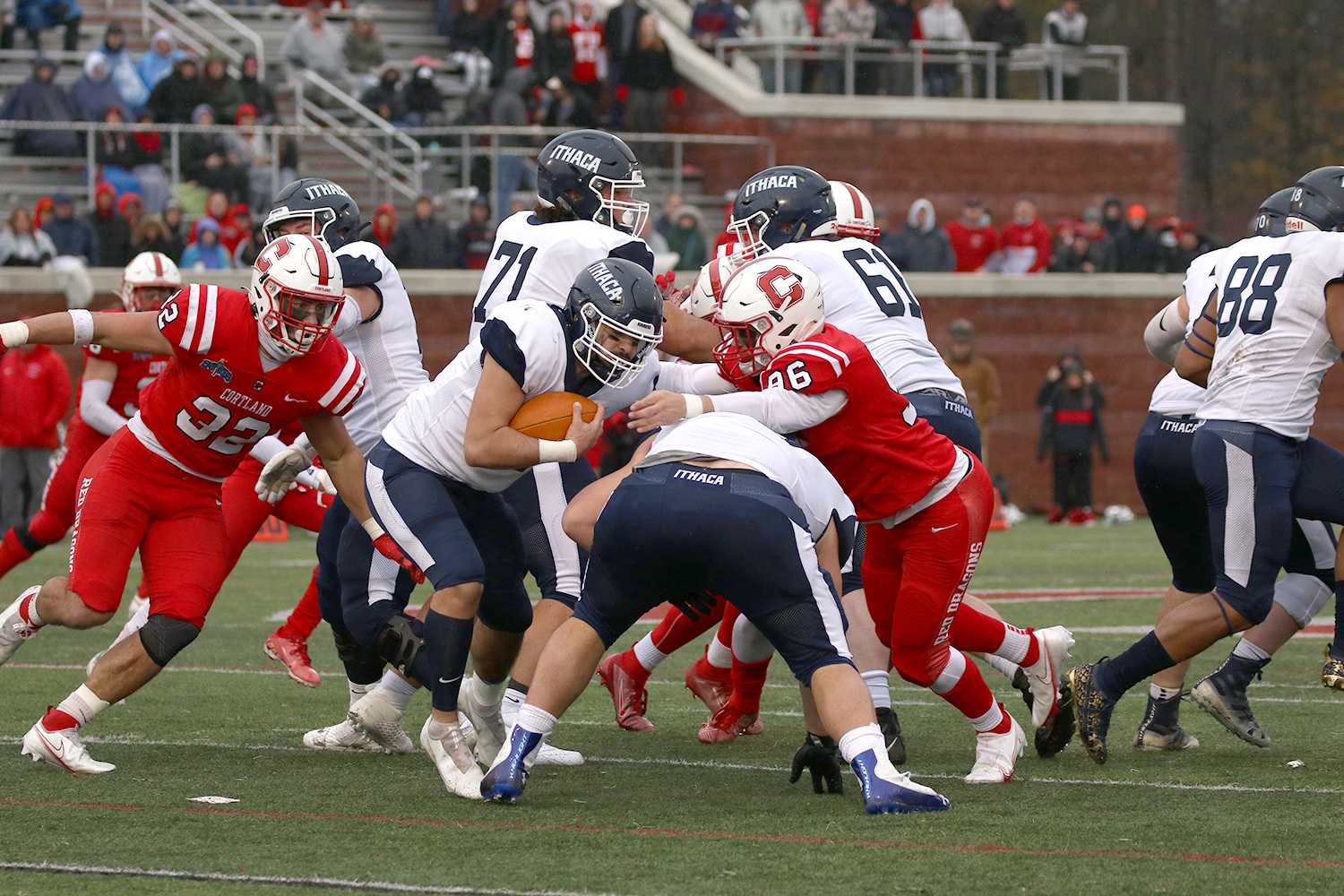 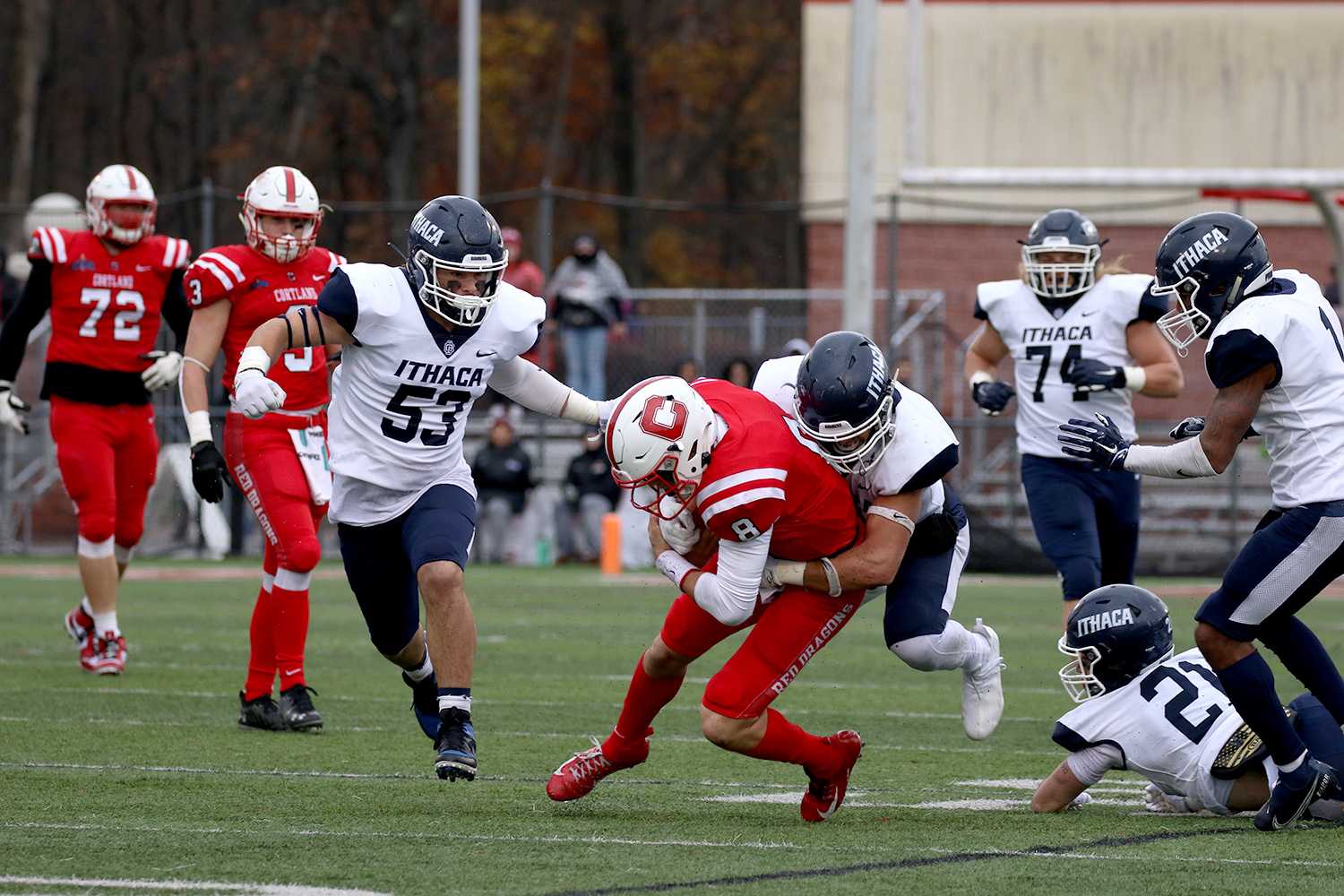 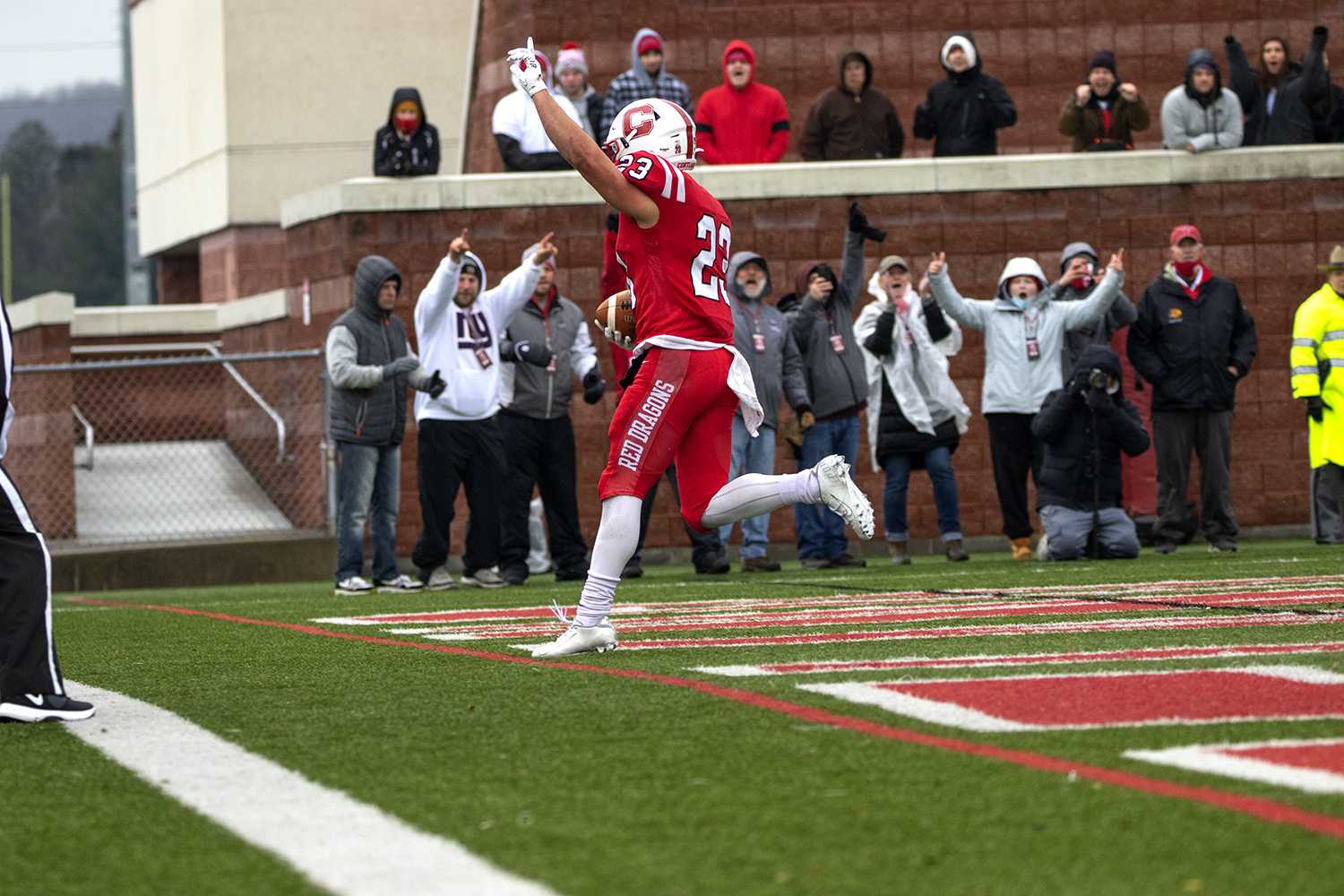 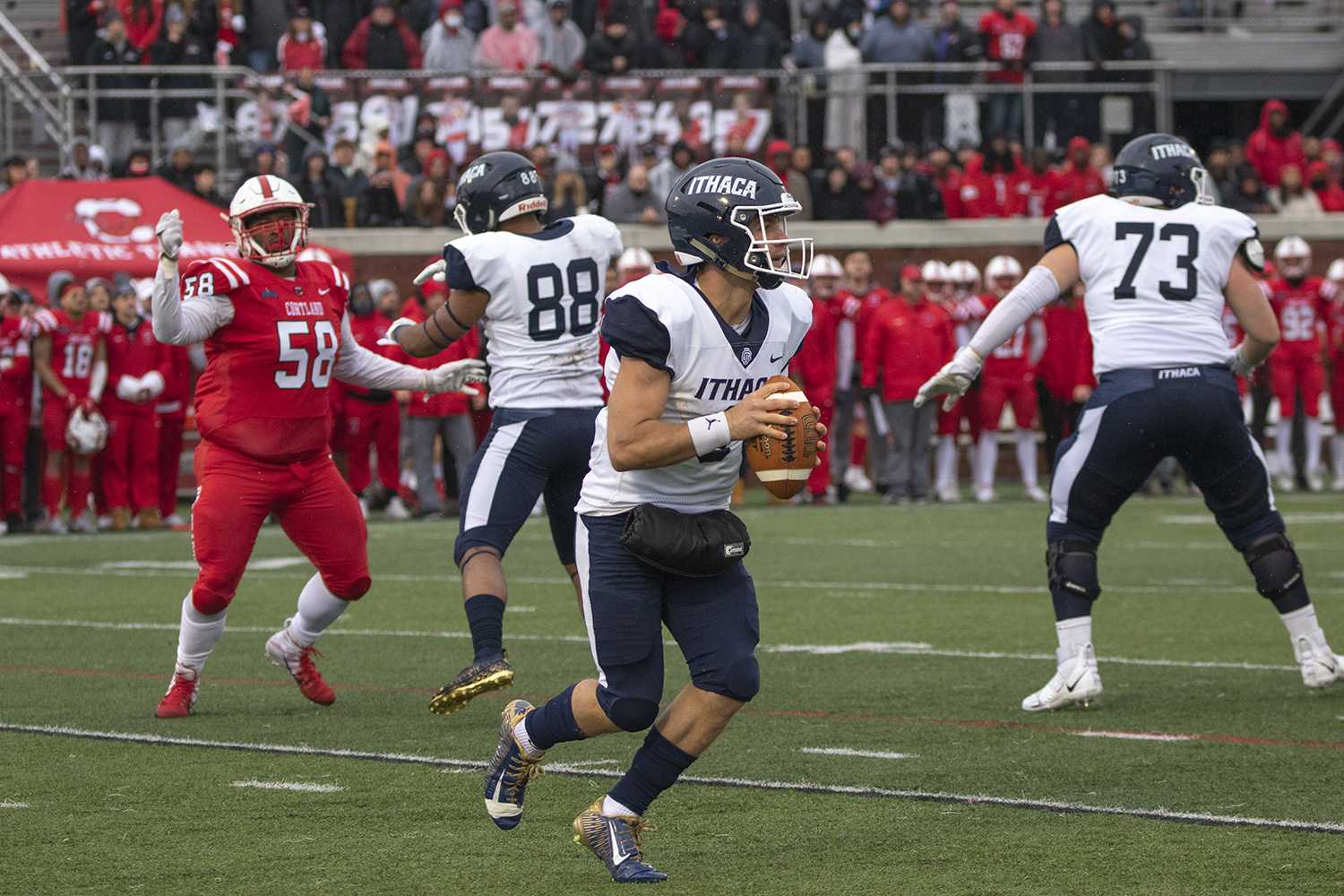 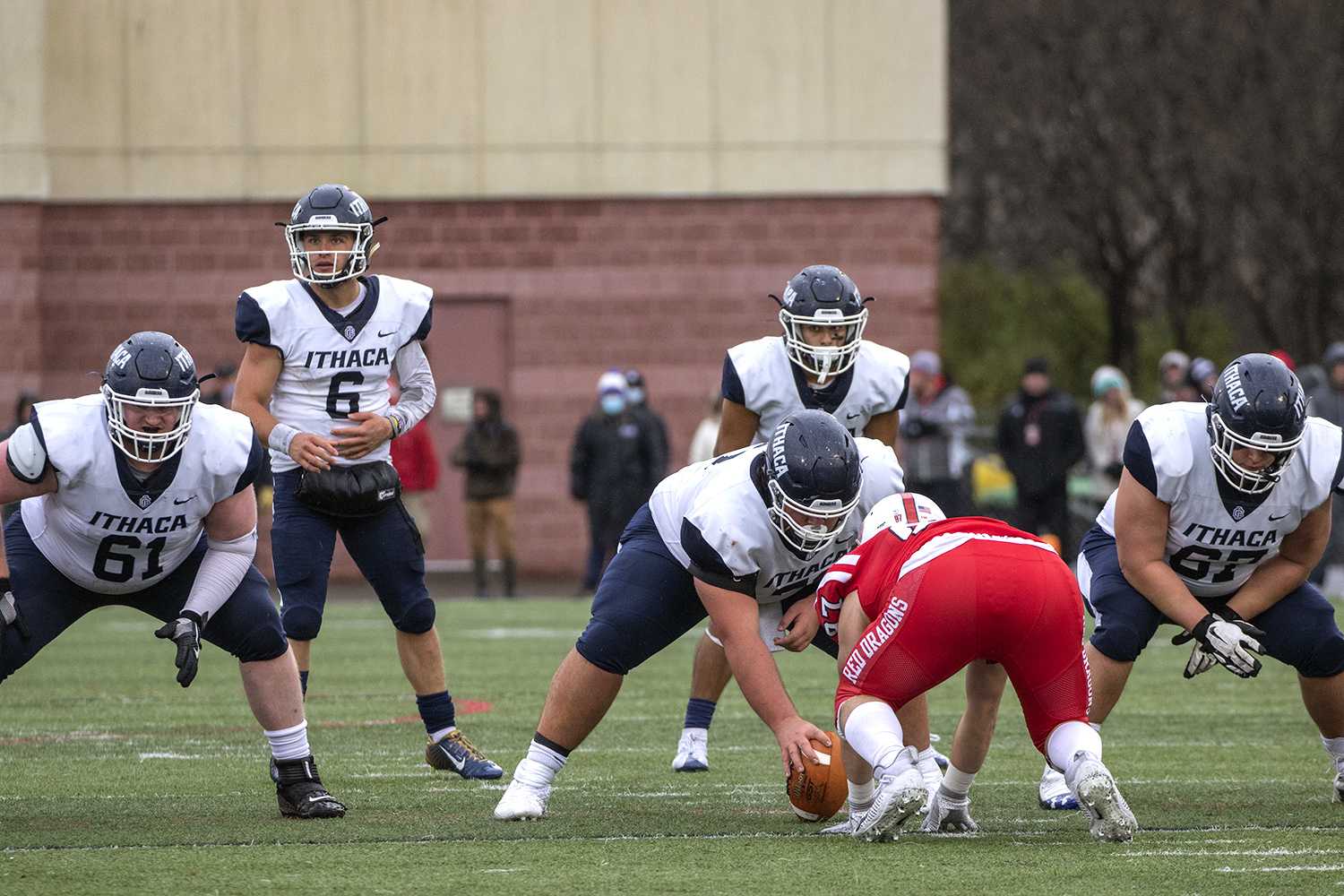 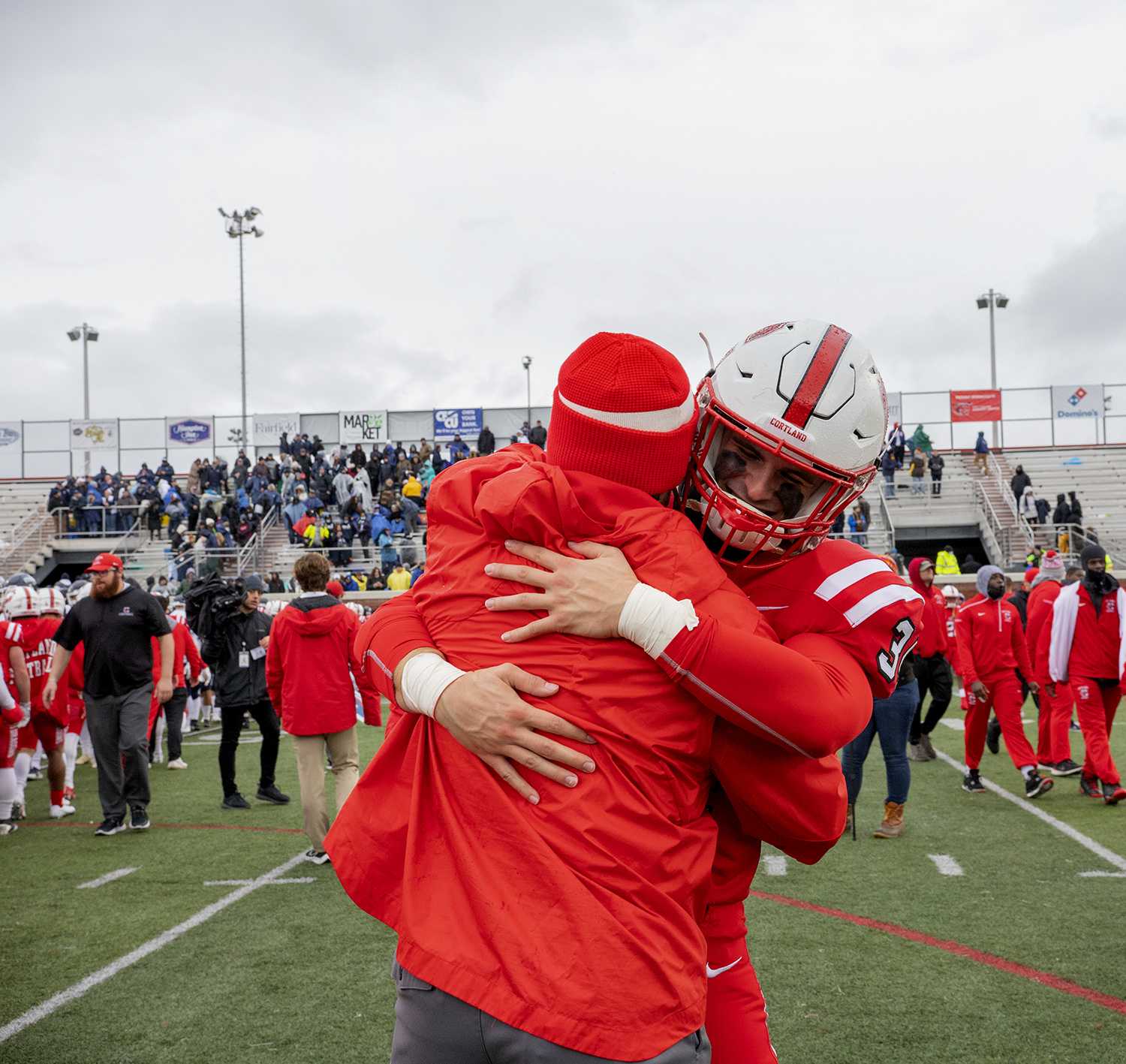 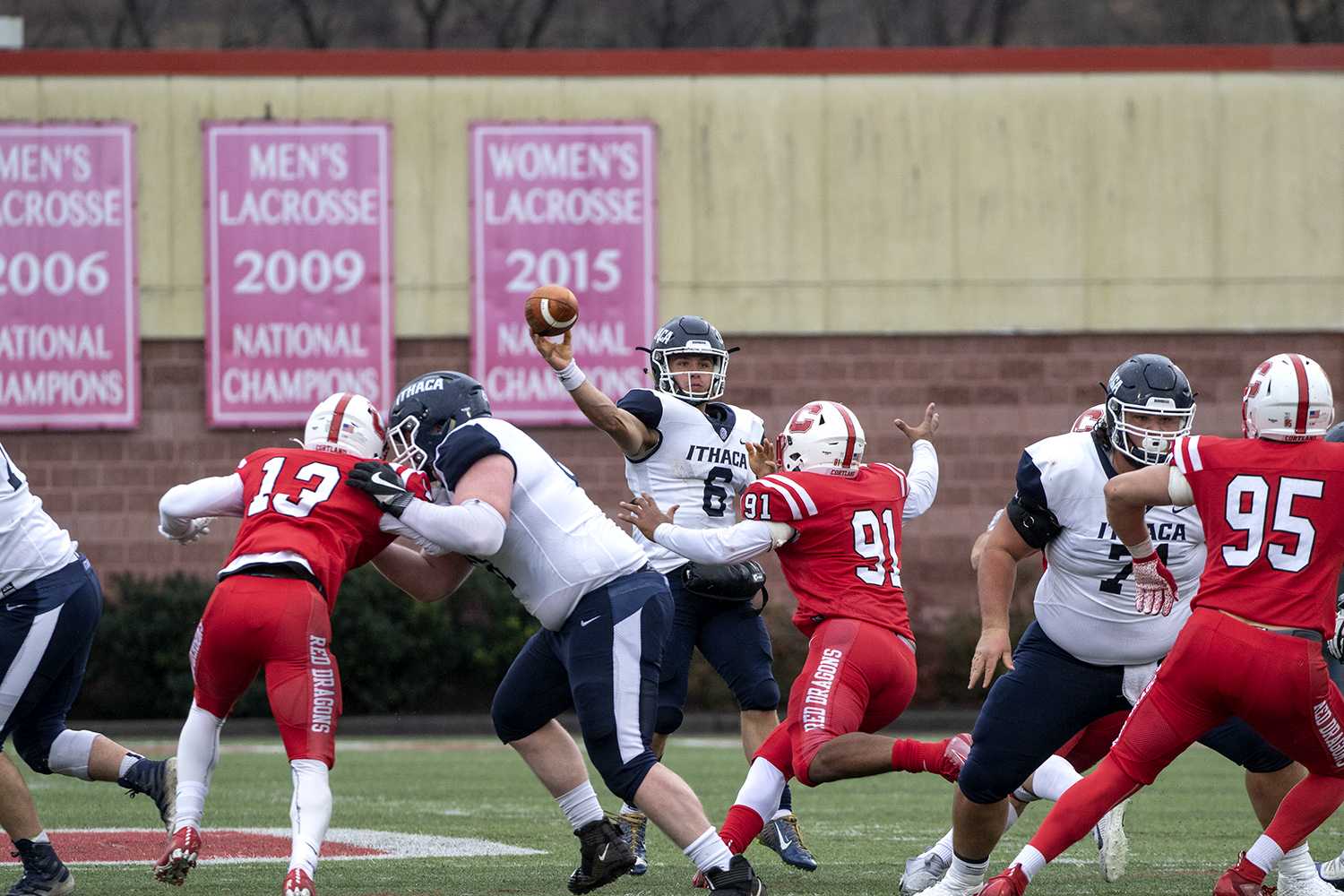 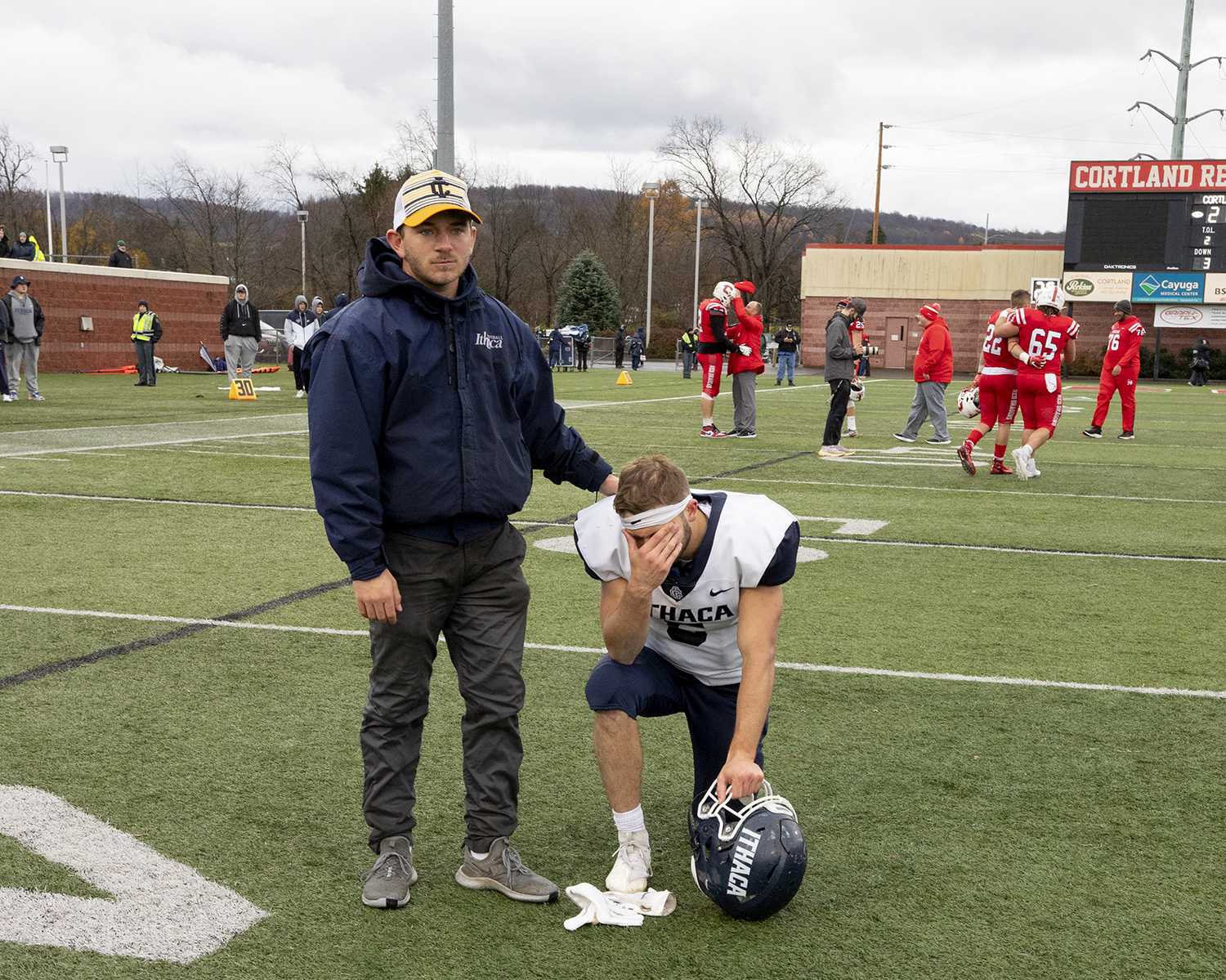 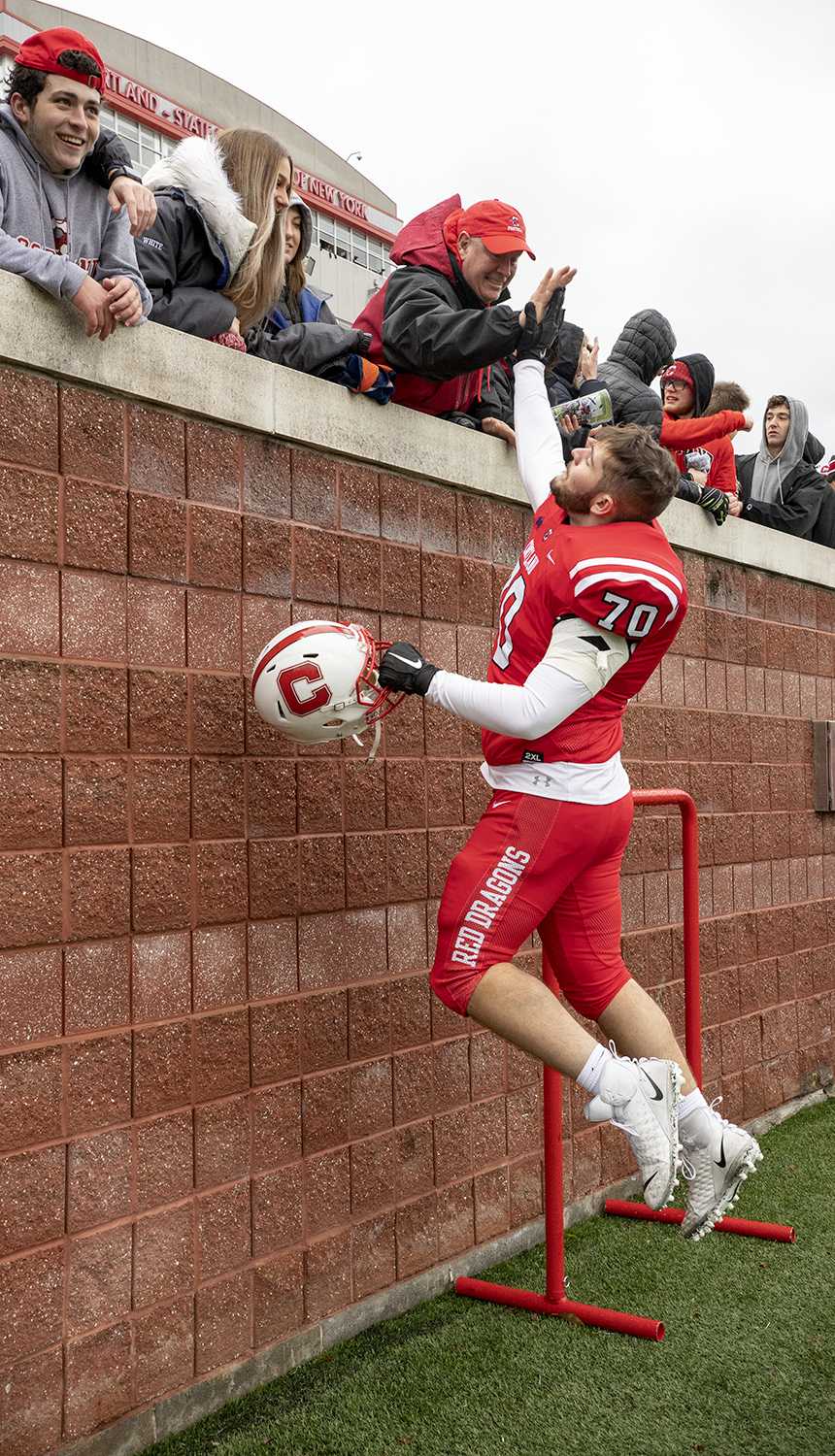 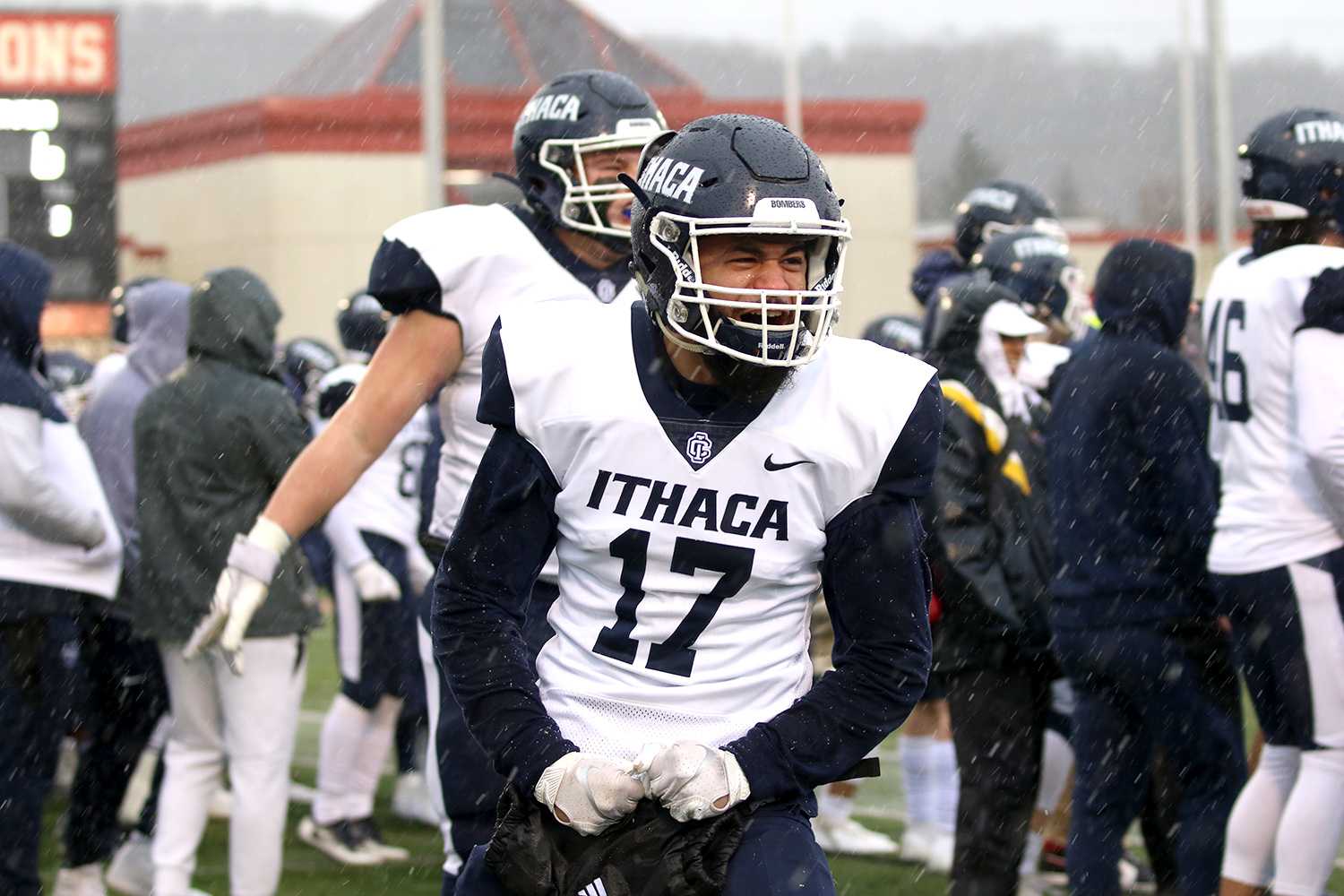 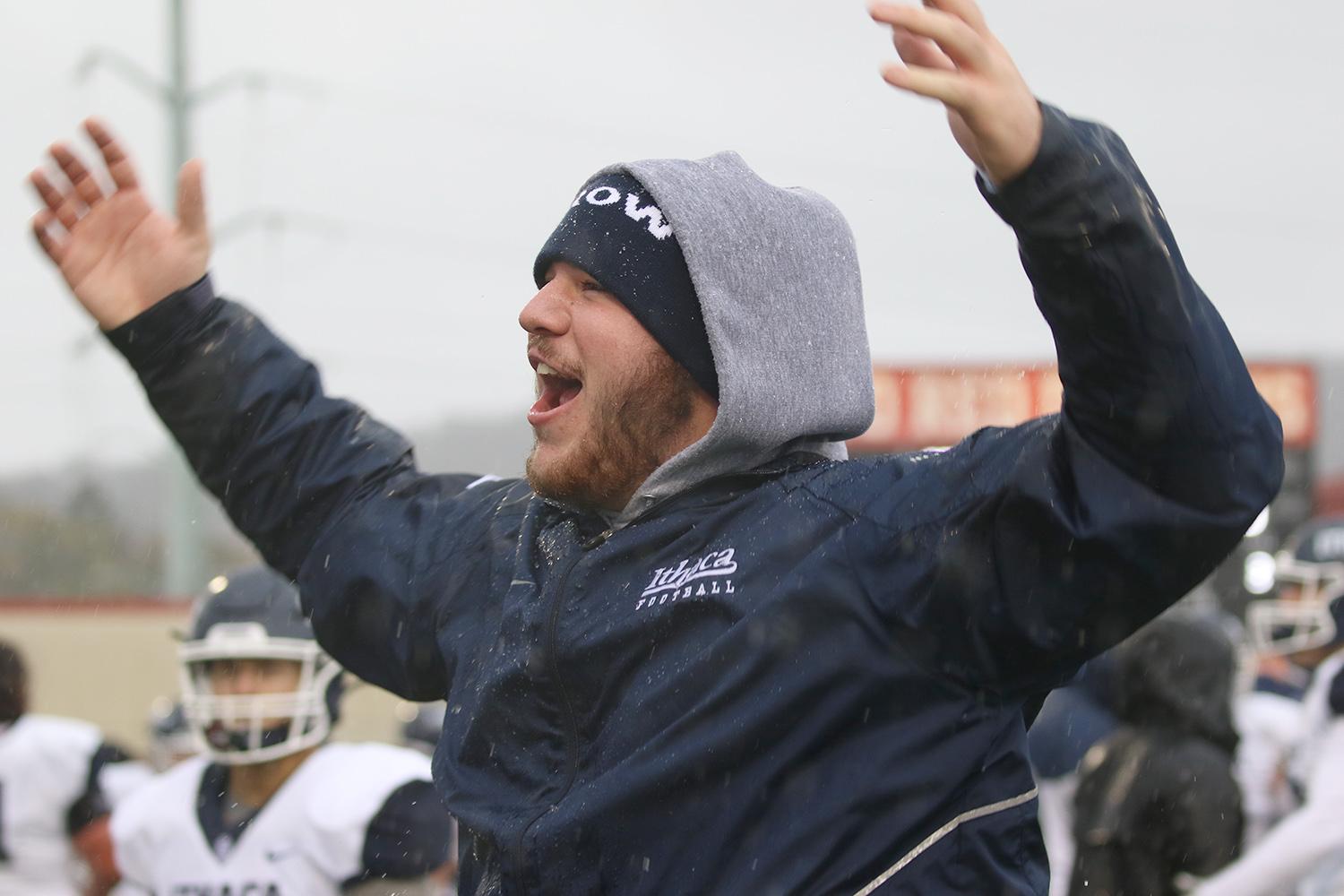 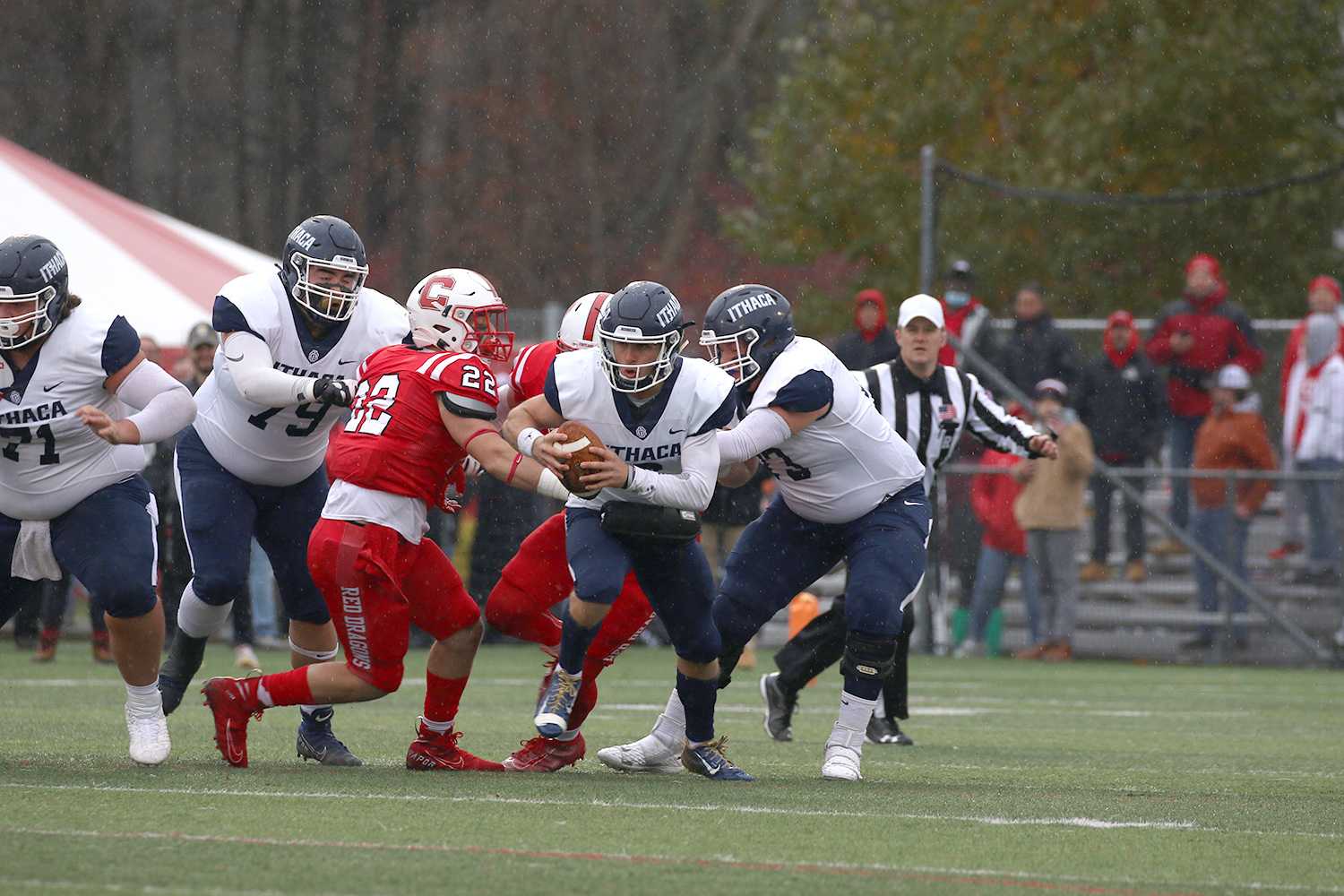 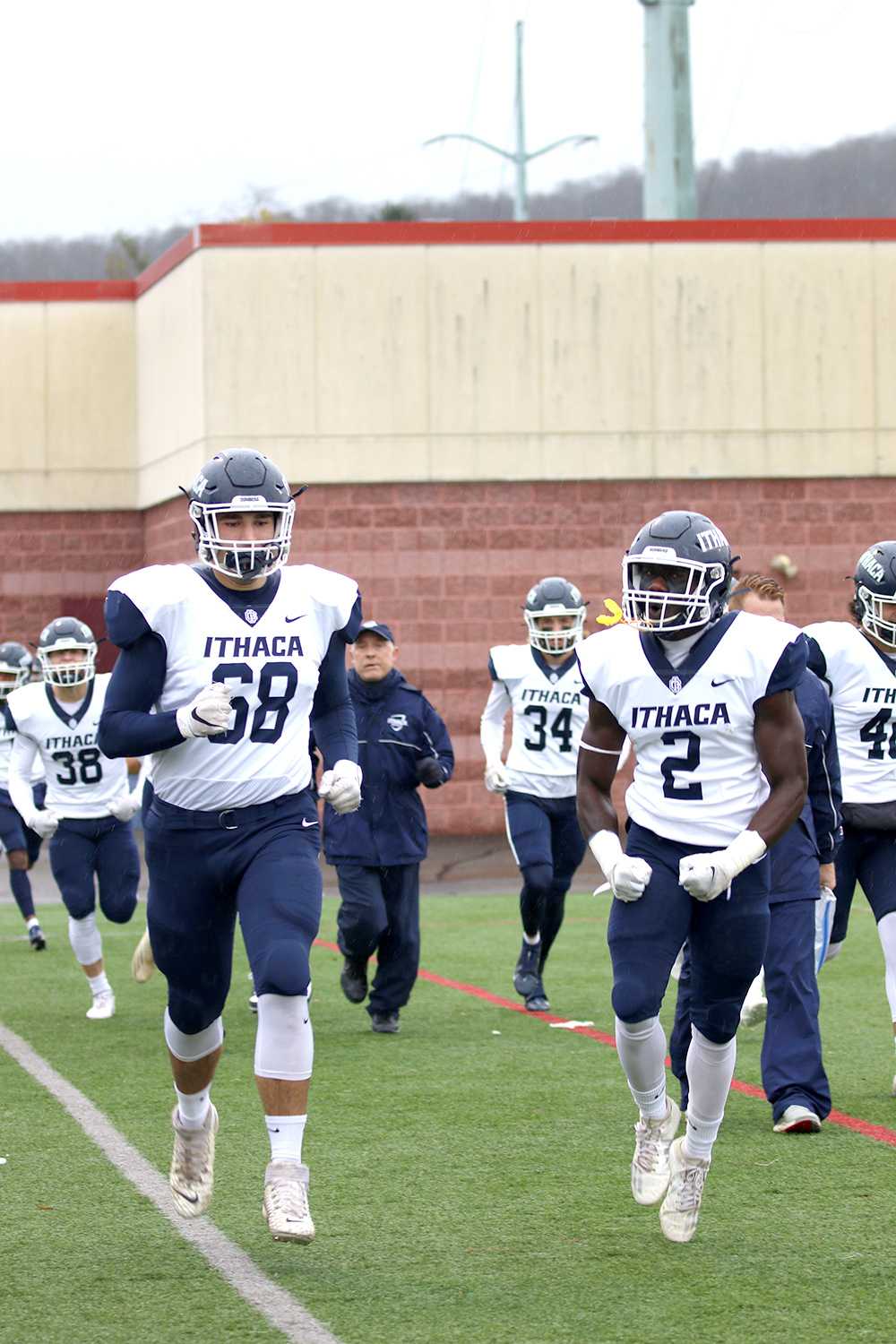 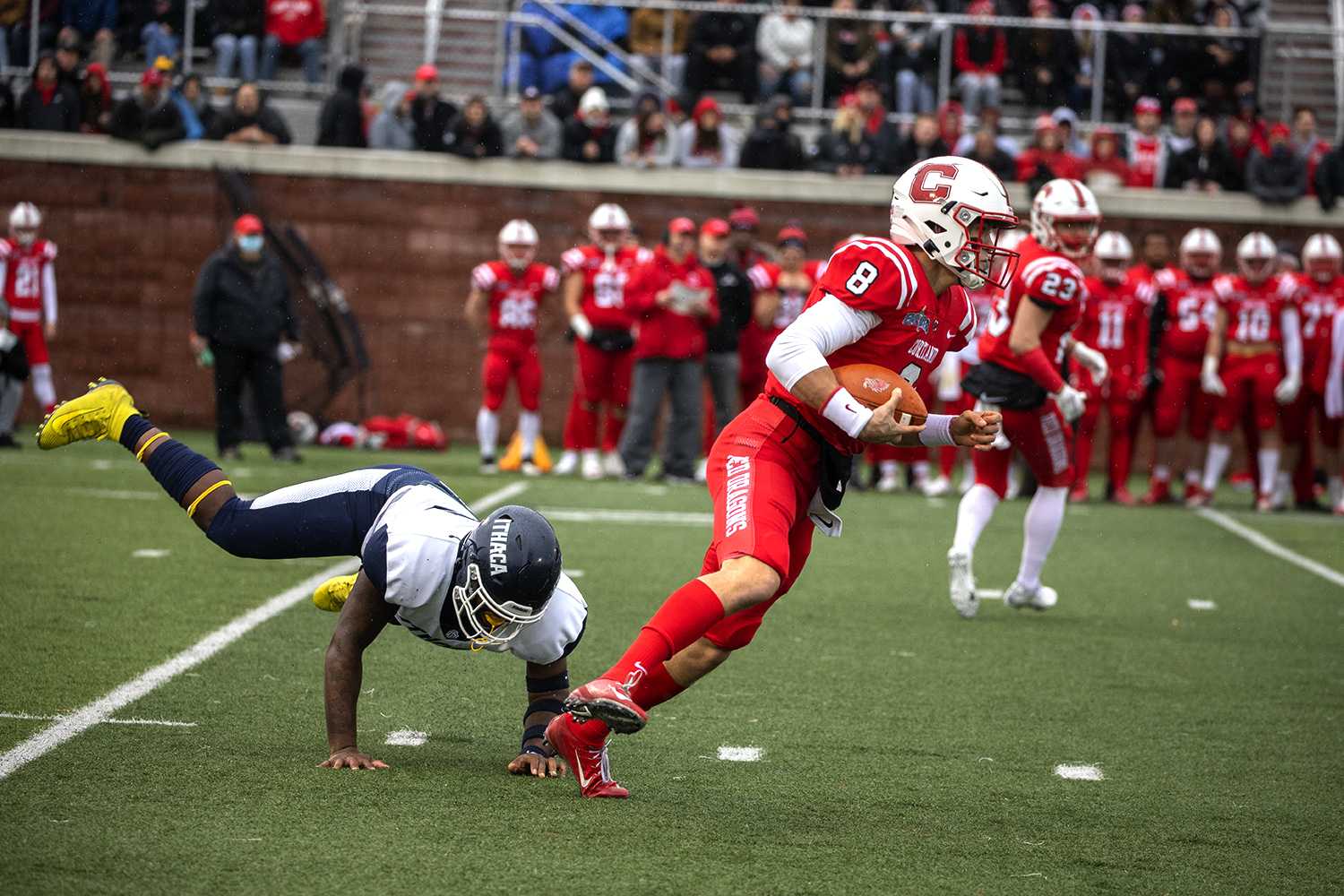 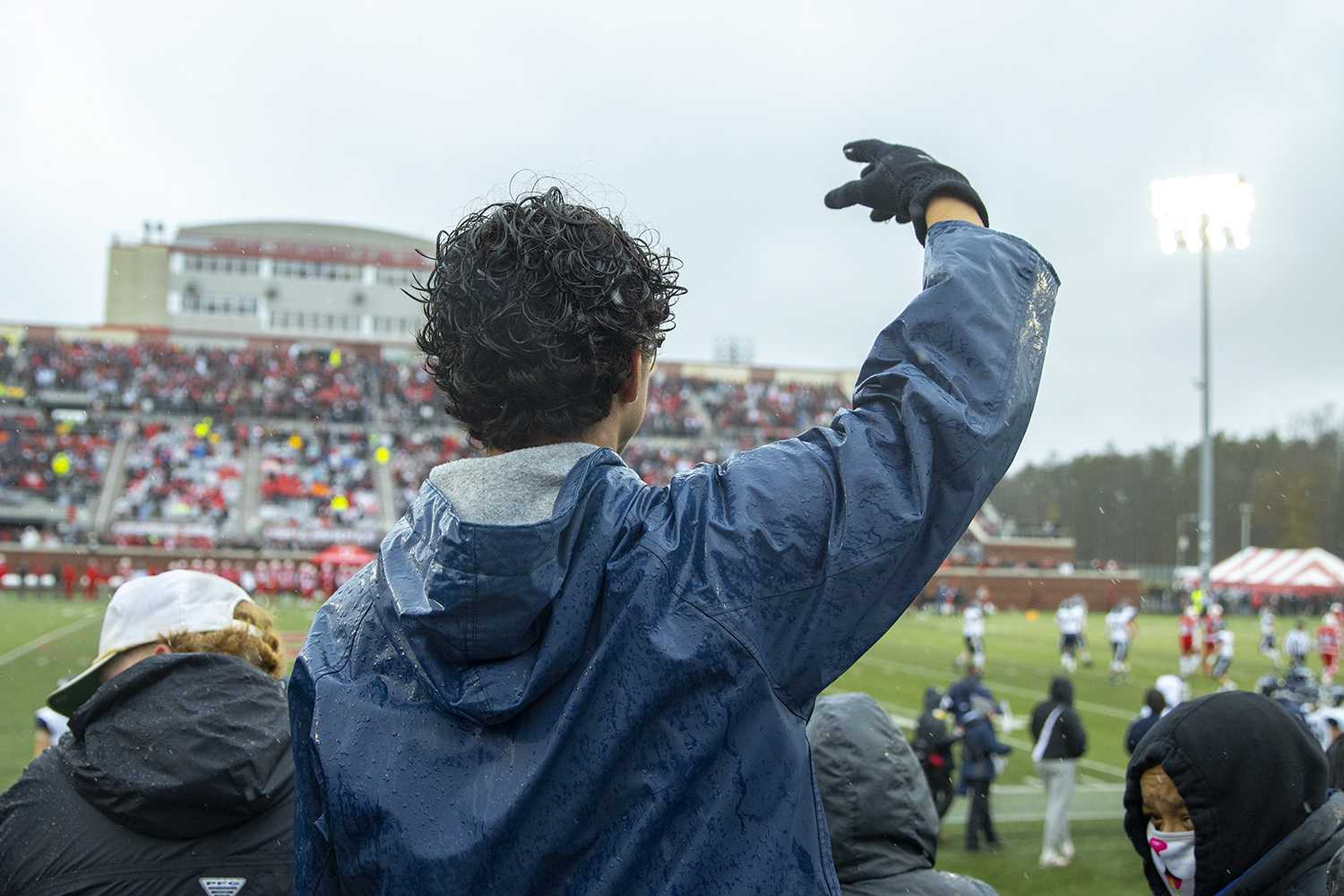 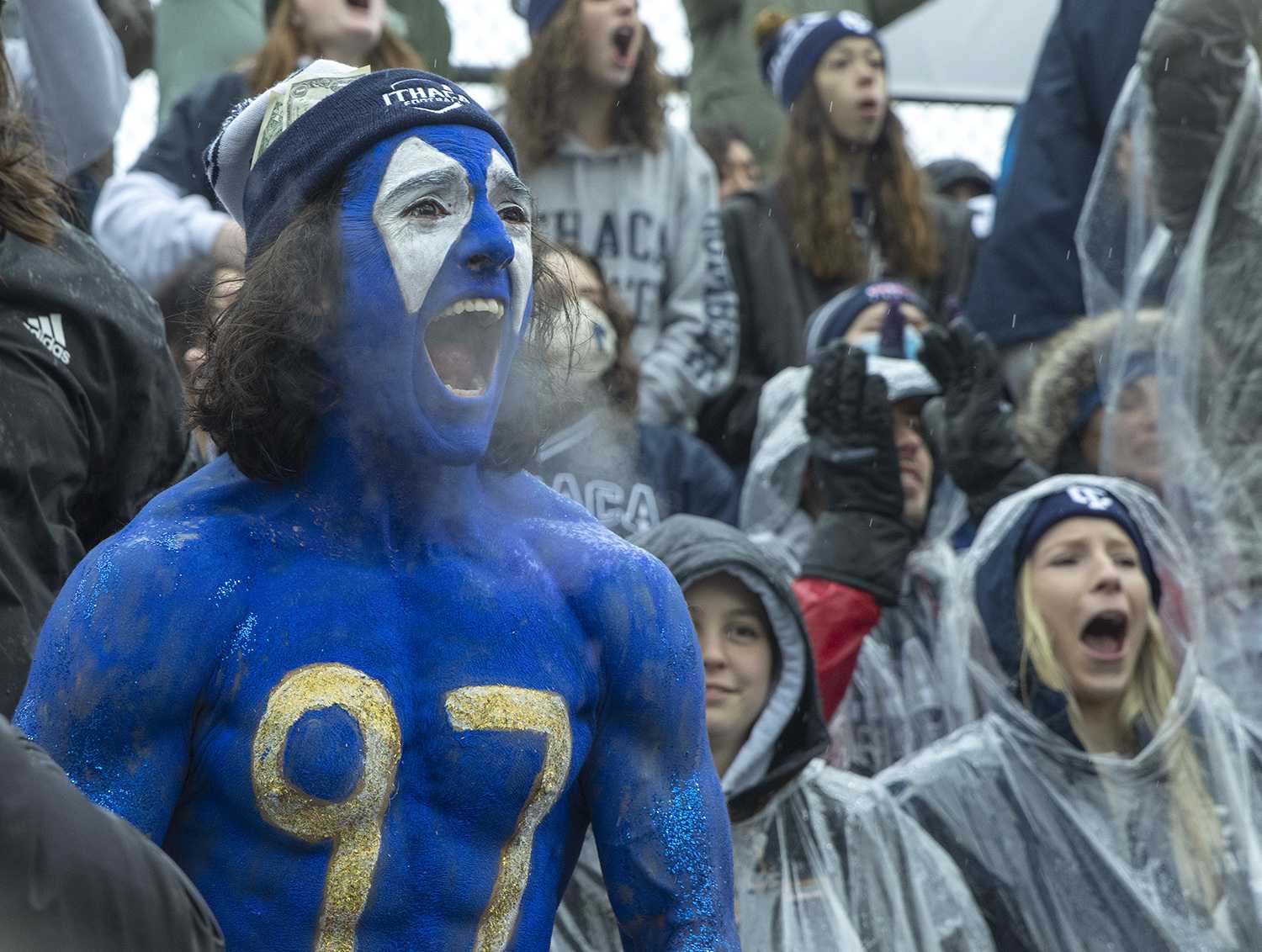 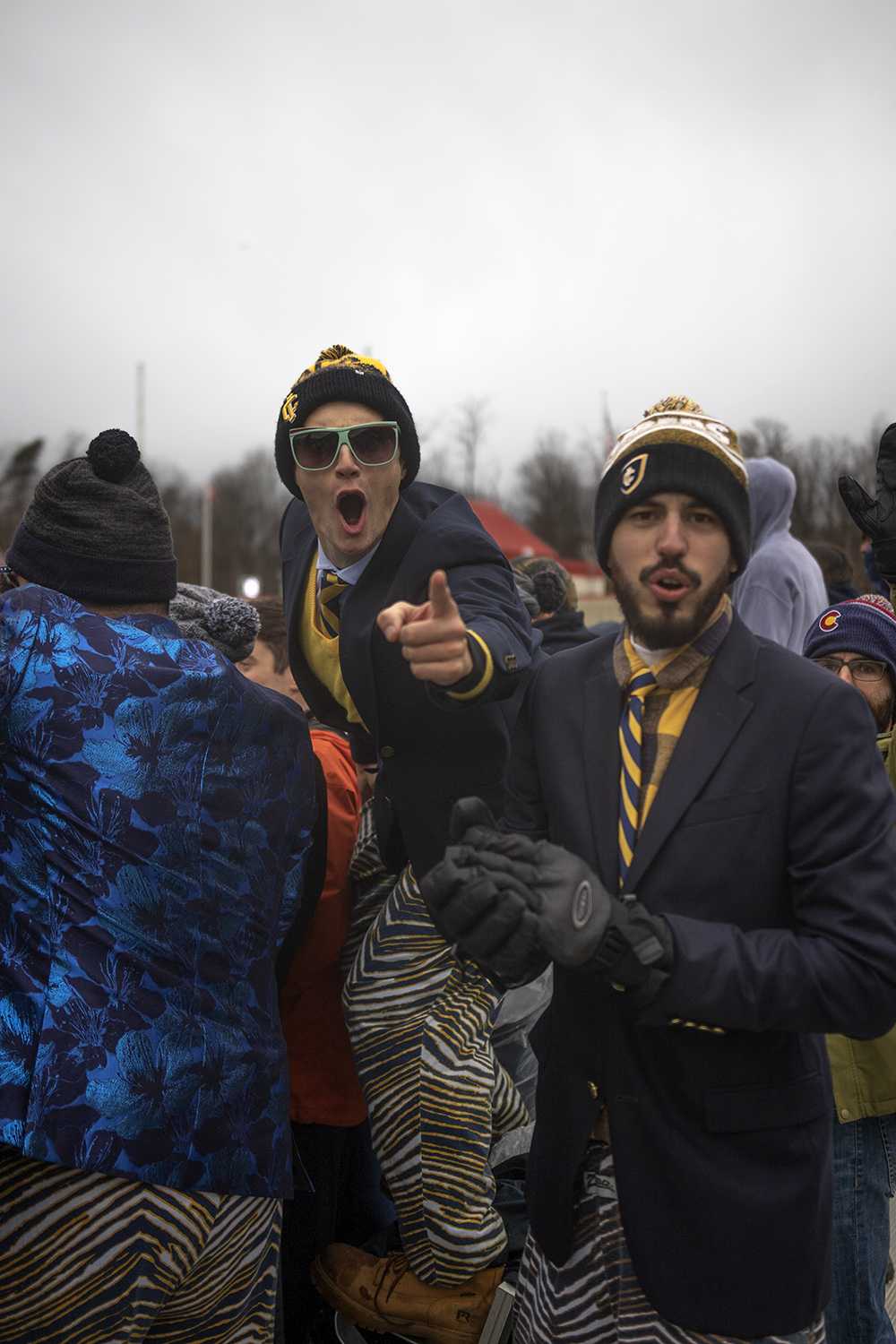 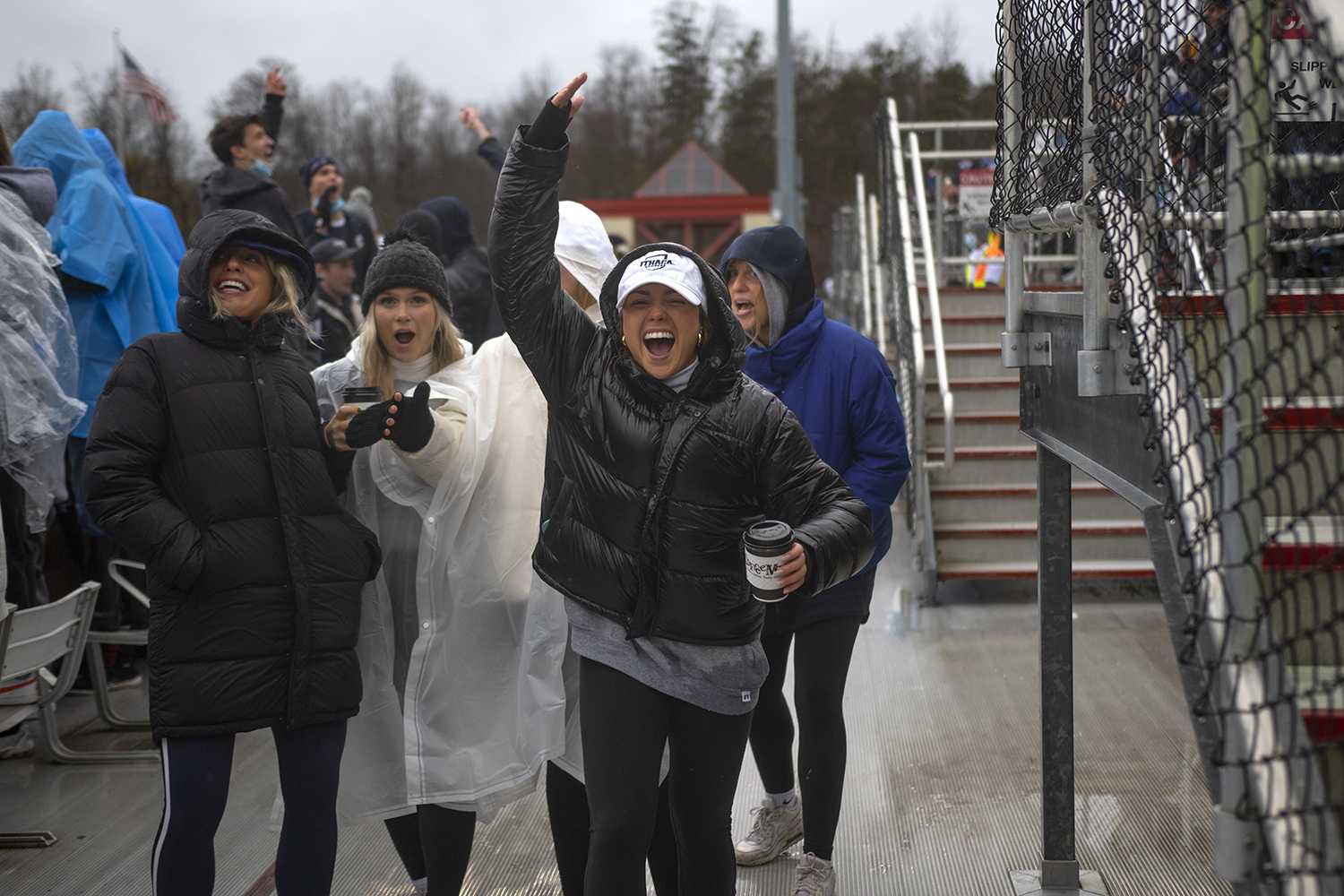 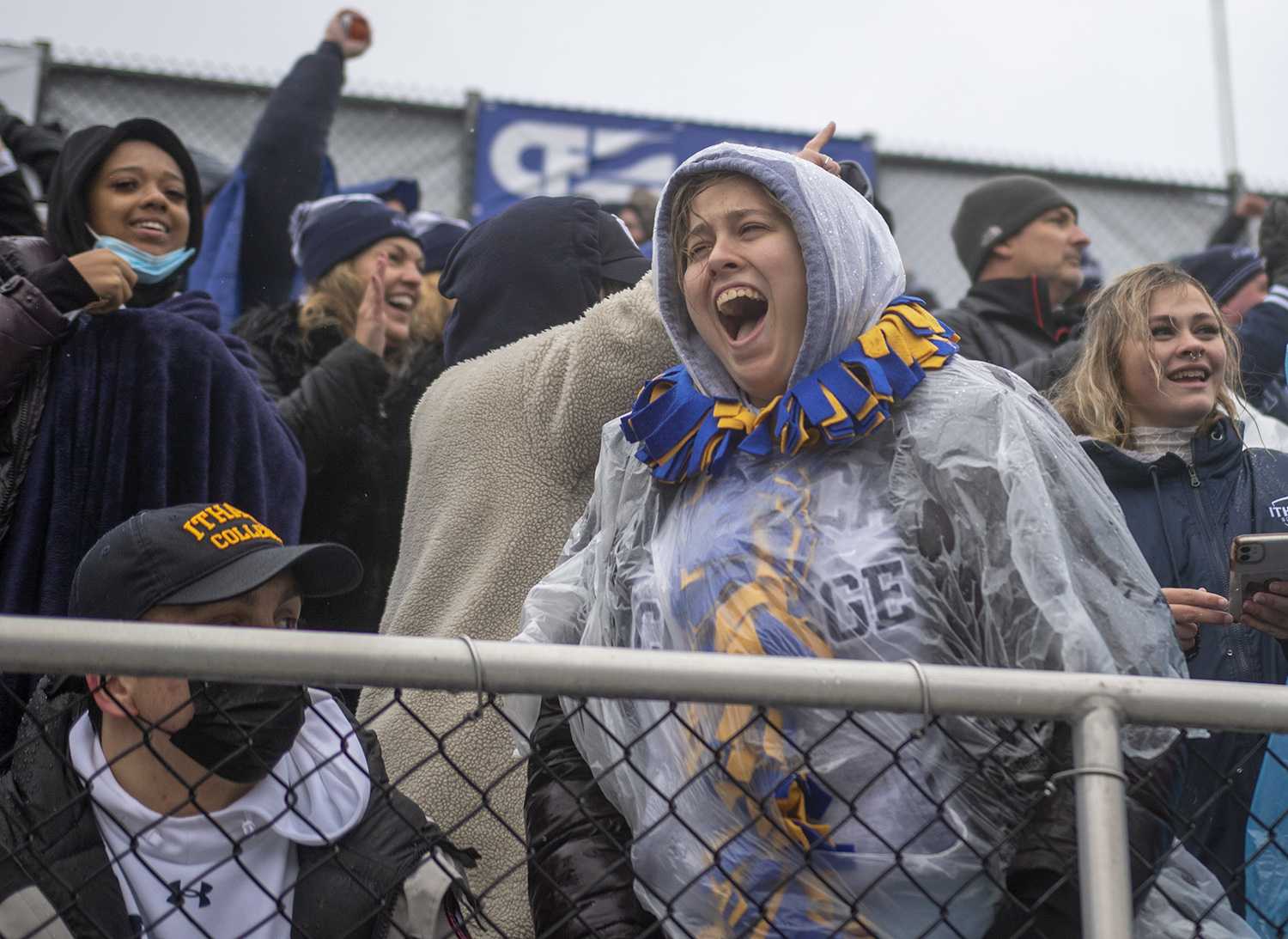 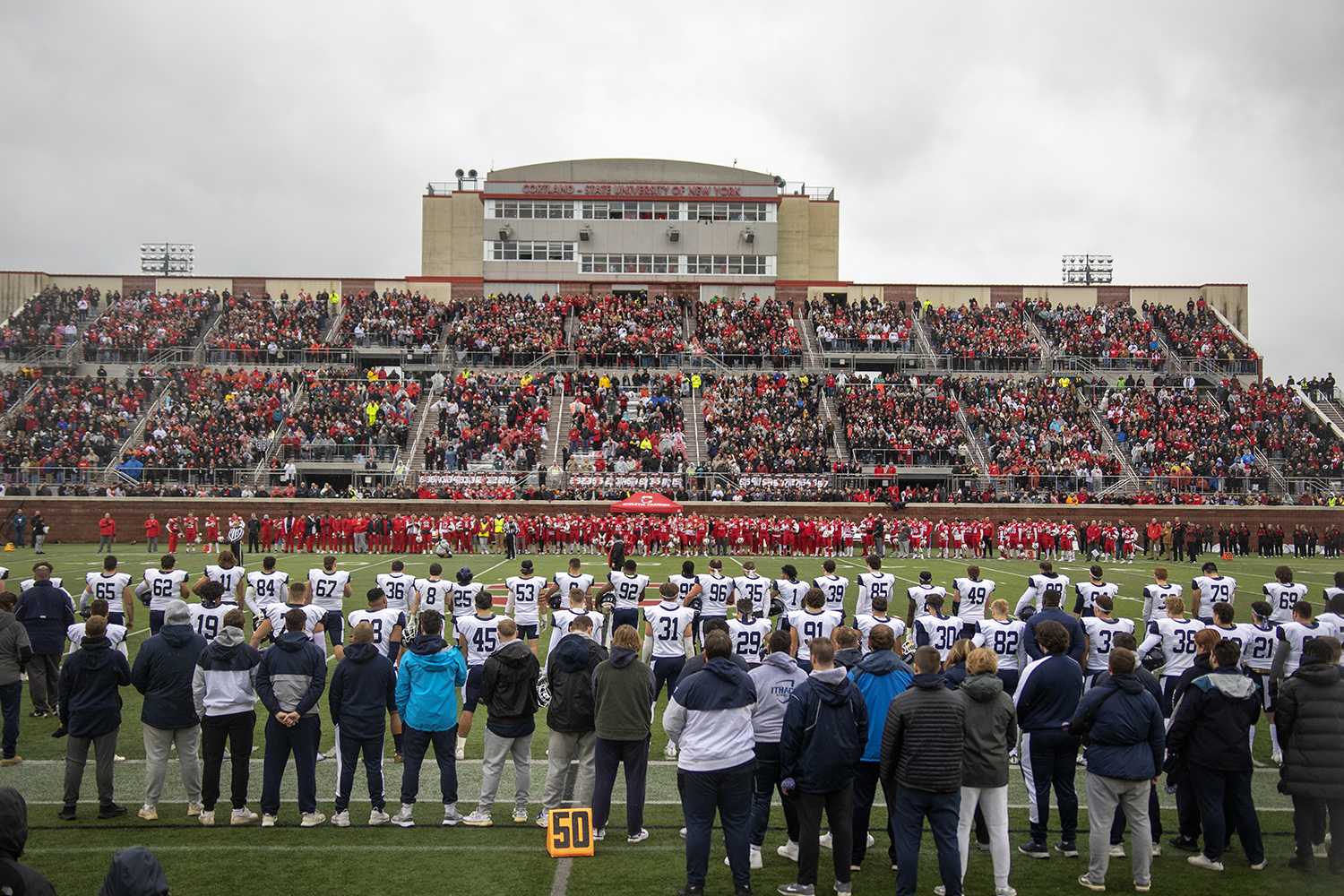 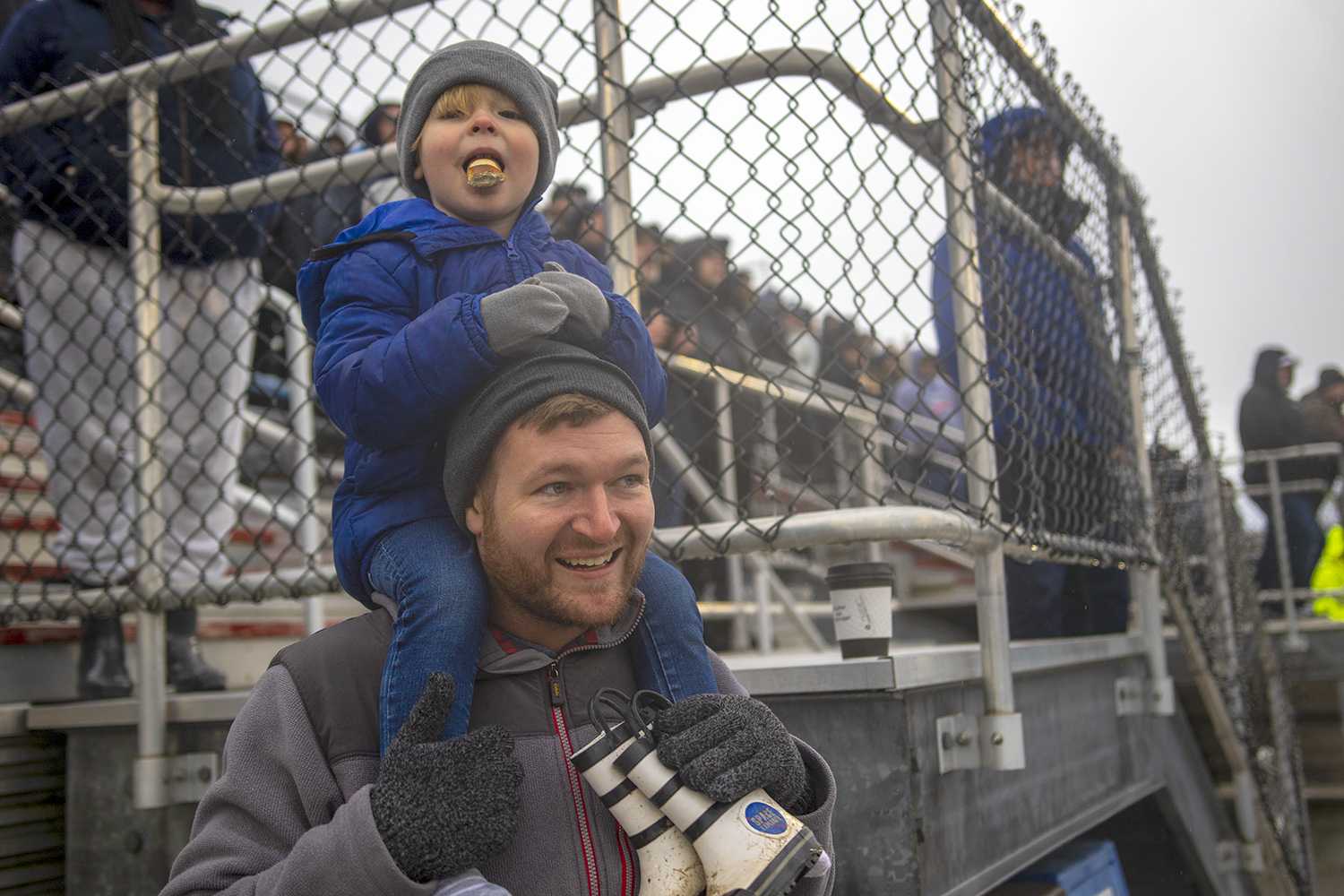 Alumni like David Aaronson ’20, former SUNY Cortland football player, used the game as a chance to root for his former teammates and reunite with other members who were not able to come back last year with the game not being played. Looking back and ahead to compare the Cortaca Jug experience from 2019 to this year and what 2022 will be like, Aaronson said each game has differences, but it is still the Cortaca Jug.

The Red Dragons responded quickly, cutting their deficit to 27–21 with 3:45 remaining in the quarter. Segala completed a 7-yard touchdown pass to wide receiver Derek Cruz in the left corner of the end zone, narrowing the score.

The Red Dragons reclaimed the lead in the fourth quarter, as Segala connected with Cruz again for an 11-yard touchdown pass. Kicker Nicholas Guglielmo then converted the PAT to give SUNY Cortland a 28–27 advantage with 8:19 left in the contest.

The Red Dragons emphatically preserved their lead with 1:51 left in the game, blocking Bahamonde’s field goal attempt at the 35-yard line. This clutch defensive play secured SUNY Cortland’s victory over the Bombers.

Wingfield finished with 167 passing yards and one passing touchdown, and sophomore running back Jake Williams rushed nine times for 76 yards.

The Bombers finished the regular season 8–2 overall and 5–1 in Liberty League play. The team tied Rensselaer Polytechnic Institute for the conference championship and concluded its fourth straight season of having eight wins.

Segala said the game was an instant classic with each team coming back from deficits throughout the game and the dramatic ending. Segala said none of his teammates blinked when they were faced with adversity, and have prepared all season for that game.