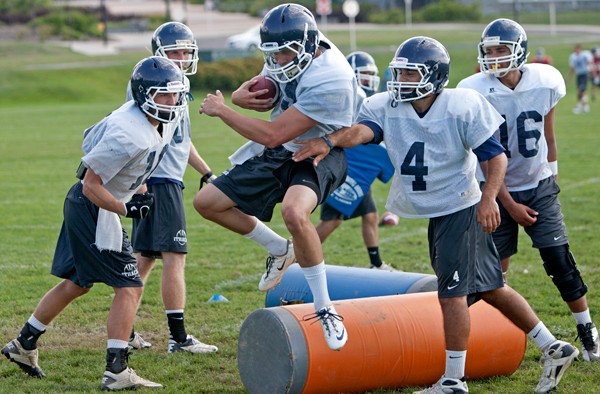 After its first losing season since 1961, the football team is keen to move on from the frustration of last year and try to contend for its first Empire 8 Conference crown since 2008.

Despite a 4–6 overall record and a seventh-place finish in the Empire 8 last season, senior defensive end Owen Kugler said he is optimistic about this season.

“We’re not going to forget about last year,” Kugler said. “But we know that it’s our time. We have a lot of kids returning on both sides of the ball, and we’re really hyped up.”

The Bombers are hoping last year’s losing season was simply a fluke after going 6–4 in 2010. Kugler said the key to improving their defense is fixing the pass rush and simplifying communication among the front seven after they generated just 11 sacks — the lowest total in the conference — last season.

“We’ve worked a lot more on pass rush techniques; our D-linemen have gotten bigger and faster,” Kugler said. “We’re understanding our concepts. Last year our terminology was off and now everybody is on the same page.”

Kugler attributed the confusion with the playbook last season to the new philosophy instilled by defensive coordinator Mark McDonough. Senior linebacker Will Carter said the team will retain the 3-4 defense, and he hopes the team will enter the season with a something-to-prove mentality after last season’s failure.

The offense’s struggles last season were apparent after the Bombers finished last in the Empire 8 in scoring, rushing offense and overall offense. This season, junior quarterback Phil Neumann will take on the starting job, hoping to bring some stability to the position after the team cycled through three starting quarterbacks last season. The South Hill squad’s passing game suffered greatly from the constant shuffling behind center and finished dead last in passing efficiency in 2011.

Neumann said watching films from last season helped him identify issues with his pocket presence and his throwing mechanics.

“It’s another year of experience, seeing all those situations that I did last year and gaining that experience and becoming a better quarterback, throwing a ball with my feet and improving my accuracy,” Neumann said.

“We’re going to move people all over, shift and try to outnumber the defense to get them to adjust to us,” Heasley said. “Our goal is to have them play at our tempo, so we want to dictate the tempo by being to use formations, motions, and shifts.”

Senior wide receiver Joe Ingrao said he welcomes the change in energy that Heasley has brought to the offseason training sessions and preseason practices.

“In the four years I’ve been here this is the best camp I’ve been a part of,” Ingrao said. “You can feel the electricity and everyone is ready to go.”

The Bombers will begin their season Sept. 1 at Moravian College in Bethlehem, Pa. Conference play begins Sept. 22 at Frostburg State University in Frostburg, Md. However, October is the month that will really determine the club’s conference fate, with away matchups against Alfred University and St. John Fisher College, followed by a home game against defending conference champions Salisbury University. After a dramatic overtime loss to Fisher last season, the players are chomping at the bit to beat the Cardinals for the first time since the team’s classic 2005 overtime win. Kugler said he wants to spoil the Cardinals’ season after they were ranked 11th in the D3football.com 2012 preseason poll.

“We want Fisher,” Kugler said. “We never beat them. They’re not the rival, but they’re the enemy. We have bad blood against them, and a lot of people give them attention recently and we don’t like that.”

That game will be on Oct. 20 at Fisher, with the contest against Salisbury taking place a week later at Butterfield Stadium. While few people expect a conference championship for the Blue and Gold after being ranked fourth out of eight teams by the Empire 8 coaches, Carter says that the Bombers are out to prove everyone wrong.

“We’re wanting to prove that Ithaca is still a contender and a force to be reckoned with,” Carter said. “And that we’re a great team and going to be a great team.”