Bombers hungry to return to top of Empire 8 perch 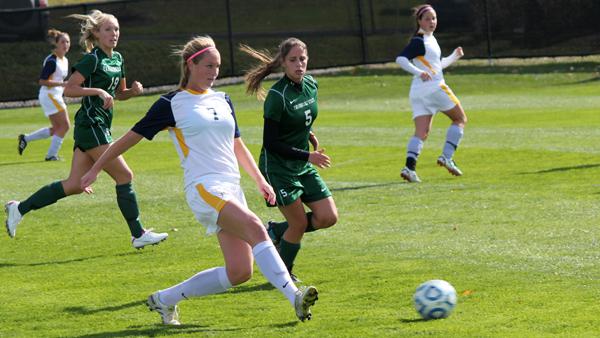 The women’s soccer team is on the verge of making history with an unbeaten record, but the Bombers’ first priority is regaining something it hasn’t had since 2009 — an Empire 8 Conference title.

With a 6-0 win against Alfred University last Saturday, the 4th-ranked Bombers not only secured an unbeaten Empire 8 record but a home field advantage throughout the entire conference tournament as well.

Head Coach Mindy Quigg said clinching home field advantage was only the Blue and Gold’s first step in their goal of reclaiming a conference title.

“We got what we wanted, which was to play at home,” Quigg said. “Now it’s a matter of proving why we are the best team in the conference.”

The only blemish on the Bombers’ Empire 8 schedule this fall was their Oct. 7 matchup against St. John Fisher College, which ended in a 0-0 tie. Quigg said the South Hill squad’s draw with the Cardinals was not a slipup but rather a situation of quick adjustment. Senior goalkeeper Becca Salant was injured during pregame warmups, and it was also the second game in two days for the Bombers.

“We went from a fast-paced win against Nazareth [College] to another fast game on the Fisher turf the next day,” Quigg said. “It’s good experience since that’s what might happen in the tournament, but it will be nice to be on our own field the entire time.”

The Bombers will play the Cardinals in the opening game of the tournament Nov. 3. Senior Julie Winn said she and her teammates are eager for a rematch with the Cardinals.

“They played more to keep us from scoring than trying to score themselves,” Winn said. “We weren’t able to finish the chances we had last time, so this time we need to score when we get the chance.”

Fisher Head Coach Jill McCabe said while her squad drew a difficult first-round matchup, they are eager to get a chance to beat the Bombers on their home field.

“We know how to handle their offense, but we also need to create some offense of our own to win this time around,” McCabe said.

Though they have already clinched home field advantage with a perfect conference record, the Blue and Gold still have one regular season game remaining on their schedule — a road matchup against Rochester Institute of Technology, a team the Bombers held onto a narrow 3-2 victory against last season.

Winn said this matchup is important given the circumstances the team potentially face.

“We’re treating these games like playoffs games, because they will be a challenge, and we know we have to be strong and play our game to finish out the regular season,” Winn said.

With just one game remaining on the regular season slate, the South Hill squad is on the verge of completing the first unbeaten season in the program’s history. Winn said keeping the streak alive continues to be difficult, especially late in the season.

“With every game you win, you have a bigger target on your back, and it motivates teams to beat you even more,” she said.

As the Bombers approach the conference tournament, Winn said the team is getting excited for the chance to shake off memories of its first-round exit against Nazareth last season. The Golden Flyers defeated the South Hill squad 3-1 to advance to the 2011 championship game.

“I can remember the team being really frustrated and disappointed after we lost to Nazareth College last year, and we don’t want that to happen again,” she said.