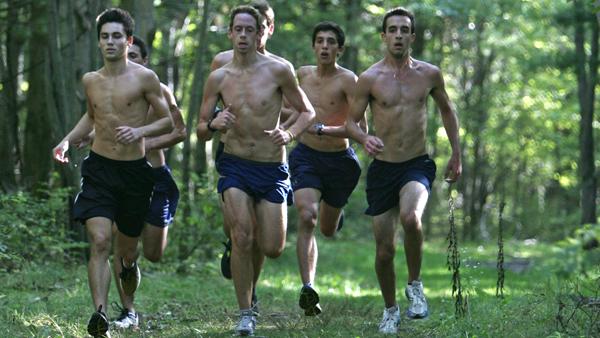 Before every practice and meet, sophomore cross country runner Niko Athanasatos puts on his headphones and begins listening to his running playlist, which consists of songs by opera singer Andrea Bocelli.

“When I was in high school I didn’t really have a team, so when I ran alone, I ran listening to Bocelli because it was the only music that connected with me,” Athanasatos said. “By him talking about falling in love, it gave me an emotional connection because I was falling in love with running.”

Athanasatos is a new addition to the cross country team this year. He began cross country in the seventh grade in Valhalla, N.Y., once he found that he didn’t excel at any other sports. He continued running throughout high school and into college, where he joined the Bombers’ winter and spring track teams.

While Athanasatos is only a sophomore, he has already found a role on the cross country squad as someone who keeps his teammates loose by singing everything from classic standards to contemporary music during practices. Senior Chris Lotsbom said Athanasatos’ love for music brings a personality to the team that is all his own.

“Besides his talent as a runner, he also brings a totally different aspect to the team,” Lotsbom said. “We’ve got the serious guys on the team and we’ve got the quiet guys, but then we have Niko who can change the atmosphere or someone’s attitude with his singing, no matter what.”

Not only does Athanasatos’ love for music pump him up for his cross country races, but it also translates into his positive, confident personality. Senior Captain David Geary said Athanasatos’ love for his team is evident through his general happy-go-lucky attitude and dedication as both an athlete and a teammate.

“He brings so much good energy, leadership qualities and extreme happiness that make him a really great role model and motivator,” Geary said. “He was an alternate at our 4×800 meter relay at the ECAC Championships, so we know he has the talent, and I see good things coming from him for his first cross country season.”

Athanasatos said he didn’t join the Bombers cross country squad during his freshman year because he was intimidated by the increased distance from high school to college races. His outlook changed once he began interacting with some of the team members during the track seasons.

“When I decided to run cross country, they were so welcoming and provided me with so much support that I went from being a half miler to running five-mile races,” Athanasatos said.

One of the biggest connections between running and music, Athanasatos said, is the feeling he has following his success.

“The feeling I get after a good race is identical to the feeling after a solid performance playing or singing,” Athanasatos said. “Even though they are completely different things, when I finish either, it is an aesthetic, emotional experience that gives me a temporary euphoria.”

Even with such a great love for music, Athanasatos chose physical therapy as his major so he could keep making music just for fun. Instead, he saves his songs and guitar performances for the occasional passerby on The Commons, Ithaca College’s Open Mic Night in TC Lounge or a Thursday afternoon practice with his teammates.

Geary said music acts as an outlet for Athanasatos, so it allows him to release any stress he has and contribute the positivity and humor to the team everyday. Freshman Ben Grove said Athanasatos looks to keep the mood light whenever he gets an opportunity.

“I definitely look up to him as someone I could talk to, and if I was not really having fun with the sport, he would be the first person I’d go to,” Grove said.

With the season beginning, Athanasatos said he plans to train intelligently and push himself to become a better teammate and athlete to keep up with the Ithaca squad in his first year. He said music taught him to seek challenges and never be satisfied.

“Any time I’m done performing, I always have that thirst or hunger to play more,” Athanasatos said. “No one should ever be content with where they are, not just musically, but in all things that I do.”