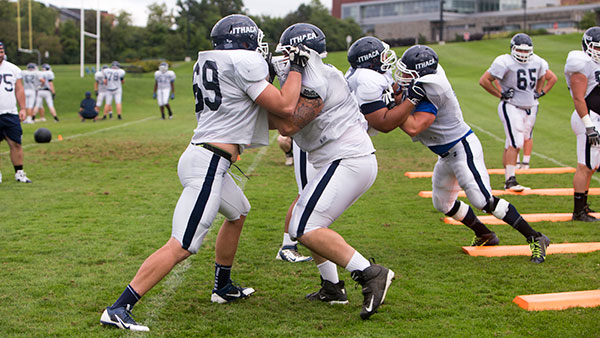 Jennifer Williams/The Ithacan
From left, senior outside guard Phil Meranda and senior outside tackle Dylan Rampa face off during practice on Sept. 11. The team will be taking on Hartwick College on Sept. 20 at Butterfield Stadium.
By KJ Hammond — Contributing Writer
Published: September 17, 2014

You won’t typically find their names in the newspaper or their numbers in a highlight reel. They’re not the guys who shine in the limelight or draw the attention of many cameras and fans. They’re the guys up front where everything begins. They’ve been playing together for years and now it’s their turn to lead, by creating space for the running backs and protecting the quarterback. You can’t call them the most glamorous group, but you can call them the Block Boys.

“Block Boys came from our starting left tackle last year, Pat Stephenson,” Mysza said. “It gives us an identity as the offensive line, and we all pride ourselves on our abilities.”

Right guard Benvenuto said the depth and veteran experience among the offensive line has benefited the team greatly.

“For Bobby, Dylan and I, we essentially started the last four years, and now we have another great opportunity ahead of us in which we are the leaders,” he said. “We’ve gotten a great response from the team, and we had a great Week One.”

The Bombers faced off against Union College on Sept. 6 at Butterfield Stadium, a matchup that the Blue and Gold have won every year since 2009. The win gave the South Hill squad its 34th season-opening victory in the last 38 years.

Also returning to the offensive side of the ball this year is Ryan Heasley, offensive coordinator and offensive line coach. Heasley is in his third year at Ithaca College, but before coming to South Hill, he coached at Davidson College, Washington University in St. Louis and Marietta College.

Heasley said the offensive line is filled with players who have stepped into leadership roles and are willing to put in the work each day.

“To be any good at offense in football, you first need to have a good offensive line,” Heasley said. “Having guys here who have so much experience is invaluable, and it’s going to benefit us each week.”

The Bombers defeated the Dutchmen 21–16, thanks to freshman running back Tristan Brown’s 74 yards on 12 carries. Brown showed off his speed getting to the outside but gave praise to the offensive line ahead of him for creating running lanes for him.

“I give everything to the offensive line. I love them,” Brown said. “The offensive line doesn’t get as much credit, but if it wasn’t for them, I wouldn’t be able to run for any yards.”

However, a Division III football season is eight weeks long, not including playoffs, and the competition will only get tougher.

Benvenuto said the Bombers faced some tough teams down the stretch of the 2013 season, but the experience of the offensive line this year will push the team further.

“The extra nine months together with the same guys make the biggest difference,” he said. “Now we can run different concepts, run different plays and handle everything more fluidly.”

Mysza said learning from the film and fixing mistakes is going to be the biggest difference among the offensive line when facing tough competition this year.

“Every team we face this year is going to be good, and it’s going to get tougher each week,” Mysza said. “It’s just a matter of continuous improvement. That’s what Coach Heasley preaches.”

Benvenuto said Heasley expects more than enough from the team and is its toughest critic.

“He makes sure we are never satisfied, which is huge because in college football, you only play so many games, and it’s easy to get satisfied with a few wins,” he said. “But he keeps us honest and makes sure we are always trying to get better every day, and that’s why I love him the most.”

Heasley’s first year as offensive coordinator was the first time the Bombers made it past the first round in playoffs since 2004. This year, he plans to take the Blue and Gold further but is most concerned with what’s happening in the present.

“I want to win the national championship, but first we have to win today,” Heasley said.