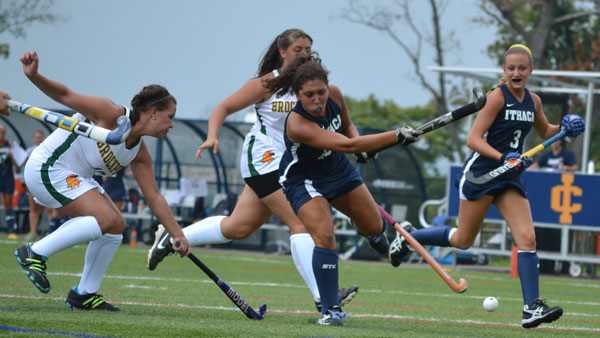 With the long-awaited first game against Wells College just around the corner, beating footsteps, long drives and tough scrimmages are just some of the impact Higgins Stadium has endured during the field hockey team’s preseason training.

Head coach Tracey Houk will be at the helm for the Bombers again this season, and she said the team has a great chemistry and work ethic, which she hopes will propel them into postseason competition.

The Bombers finished 7–11 in 2012, sustaining a 5–6 home record and just two wins in their seven road matchups. Short of a winning season, the South Hill squad was unable to participate in the postseason.

Senior midfielder and back Andrea Pace said the Blue and Gold had the potential to reach the postseason, but they were not conditioned enough to maintain the same intensity from the start of the game to the finish.

“Obviously, we were disappointed because we were below 500,” Pace said. “We had high expectations and a good team, but we just couldn’t keep the intensity to pull through in the end.”

Now, with the preseason almost under its belt, the team looks to use its high-intensity paired with the team to propel it to an Empire 8 championship.

Senior forward Lindsay Flanagan said the team outplayed most of its competitors last season but could not capitalize and win games. Now, the Blue and Gold must keep up their vigor in order to put them over the edge.

“Last season, we were losing by one point because we weren’t finishing, and our intensity dropped,” Flanagan said. “We want to be as aggressive and as intense as we can and score more.”

The Bombers key returners must compensate for goals scored for and against the team after losing four graduating seniors last season.

The Blue and Gold are in search of a new goalkeeper to replace former goalkeeper Kelly Singleton ’13, who had 127 saves last season, and her backup, Samantha Grassi ’13. The team also lost forward Julia Conroy ’13, who led the South Hill squad last season with 12 goals and 24 points.

The Bombers look forward to the return of many key players this season, such as forward Lindsay Flanagan, senior midfielder and back Emily Lash and sophomore forward and midfielder Olivia Salindong.

One of the team’s most crucial veterans is Pace, who finished the 2012 season with 17 points. She also had nine assists during the season, giving her the most assists in a single season since Ithaca College Hall of Famer Sue Bender who had 10 in 1992.

Pace said while the team may hurt from losing now-graduated key contributors, the South Hill squad plans to use its team camaraderie to outplay teams late in the game.

“Our greatest strength is definitely being close,” she said. “We have good chemistry on the field and know where everyone is going to be, so we want to use that connection on and off the field to finish off and get the ball in the goal.”

By keeping their intensity level high throughout the game and uniting the team, Flanagan said, the Bombers are ready to reach the postseason and win the Empire 8 tournament.

“I know we are all ready to have a winning season, especially after last season,” she said. “We are looking forward to the intense winning season we know we can have and reaching the Empire 8 championship.”