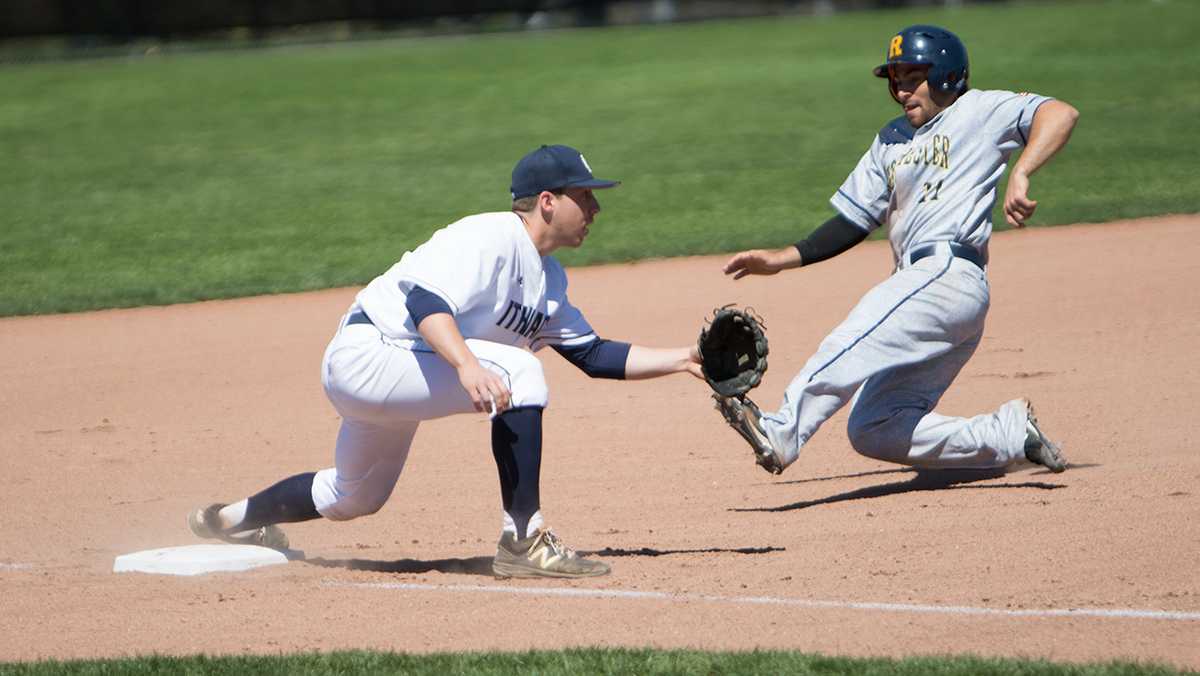 CAITIE IHRIG/THE ITHACAN
Senior third baseman Ryan Henchey is ready for the throw at third base to try to tag out freshman outfielder Jake Hertz of the University of Rochester in the Bombers' 12–11 win April 23. The Yellowjackets are apart of the Liberty League Conference.
By Caitie Ihrig — Sports Editor
Published: May 3, 2017

As the spring season winds down for Bomber sports, the teams will have to start preparing for a new challenge next year: switching conferences.

Besides gymnastics and wrestling, all of the Bomber teams will be switching to the Liberty League starting in the Fall 2017 season, which means tougher competition and a harder conference schedule. It also means the athletes will have to travel further to games, which could impact their academics, as they will miss more classes and have less time to do schoolwork.

Gymnastics will be staying in the National Collegiate Gymnastics Association, and wrestling will stay in the Empire Collegiate Wrestling Conference.

Susan Bassett, director of Intercollegiate Athletics and Recreational Sports, said the main reason for the switch was the higher level of competition and the stronger academic background.

“For us, it is really an institutional affiliation and the opportunity to connect with really selective academic institutions and schools we feel align with Ithaca philosophy, both academically and athletically,” Bassett said.

The Bombers have been in the conference since 1971, when it was still the Independent College Athletic Conference. In 1999, the ICAC became the Empire 8 Conference.

Since the ICAC was formed in 1964, the conference has included Alfred University, Clarkson University, Hobart and William Smith Colleges, Rensselaer Polytechnic Institute, Rochester Institute of Technology and St. Lawrence University. In 1995, Clarkson, Hobart and William Smith, Rensselaer, the University of Rochester, Skidmore College, St. Lawrence and Union College formed the Upstate Collegiate Athletic Association. The conference was renamed the Liberty League in 2004.

The Office of Intercollegiate Athletics first attempted to switch into the league for the 2011–12 school year but was rejected. Bassett and Liberty League commissioner Tracy King both said they are not allowed to disclose why the Blue and Gold were rejected the first time.

In August 2015, King reached out to Bassett to see if the Bombers were still interested in joining the league.

King said she extended an invitation to the Blue and Gold because of the level of competition and success the athletics program has. The Liberty League needed to fill a spot because an associate football member was leaving, and King said that another full–time member institution would add more stability than another associate member.

“Ithaca is a strong academic institution with a great tradition of success in Division III athletics,” King said. “Ithaca also has a long history of competing against Liberty League members, so this was really a natural fit for all of our institutions.”

Even though the Blue and Gold have a long tradition of playing Liberty League institutions, Michelle Manning, associate director of athletics for finance and administration and senior woman administrator, said playing them in the conference schedule will make the teams stronger.

“In some sports, it may strengthen our conference schedule, and that then will allow us to rise up if we aren’t already there,” Manning said. “In some ways, it could affect the strength of our teams. It is a competitive conference, and it is in a lot of sports.”

“The major con [of the Empire 8] goes along with competition and the fact that not many of the teams were as strong as we are,” Denish said. “For the golf team, we won seven years straight. Clearly, there needed to be a change where we can branch out and be with more people who push us to work harder and be better.”

Head golf coach Molly Braid said she is excited about having the automatic qualifier.

“Having an opportunity to compete for a spot at nationals will do wonders for recruiting more competitive players,” Braid said.

The increased competition may result in worse records for the teams, but players and coaches say the advantage of facing tougher competitions will improve the programs. Although most teams have a winning record against the Liberty League teams they have played, the scores are usually much closer, unlike the blowout games in the Empire 8.

For the men’s tennis team, this likely means that the Bombers will not be winning seven out of eight of their conference matches 9–0. Austin said the Liberty League has really good opponents on both the men’s and women’s side, which will lead to a bigger challenge for his players.

“We are playing a number of nationally competitive programs,” he said. “If we want to be able to compete at the top, that has to be our mindset, too. We have to be able to play with them. On a day to day basis, we are going to have to up our competition level.”

The change in league will cause a change in mindset for the coaching staff and members of the women’s basketball team, head coach Dan Raymond said.

“If I look at the Liberty League, top to bottom, I think it is a more competitive team,” Raymond said. “Where the Empire 8, it seems like there’s a very obvious line of demarcation between the good teams and the teams that aren’t quite as strong in the league. I think overall, it will be a very good move for us. The top teams in the Empire 8 are as good, and maybe even a little bit better than the top teams in the Liberty League.”

Recruiting also played a big role in the switch, and Raymond said he has already noticed a change in the type of athletes he is recruiting.

“We were talking with a recruit this summer who said she wouldn’t have considered Ithaca College if she didn’t know that we were going into the Liberty League,” Raymond said. “I didn’t realize that it was going to be that abrupt of a change.”

With Empire 8, the college was centrally located to all the institutions. Now, teams will now have to drive a minimum of one additional hour each way.

In the Empire 8 conference, the average travel time was one hour and 56 minutes, compared with two hours and 46 minutes for the Liberty League conference.

Sophomore tennis player Michael Gardiner said that to combat the increased travel time, he will have to do his schoolwork during the bus rides to and from competition sites.

“If anything, it will become an even greater temporary escape from academics, which always helps when you have a busy schedule,” he said.

When creating the competition schedules, Bassett said they will be trying to balance home and away games so the same classes are not always missed.

“The good news is we are in a league with like-minded institutions where nobody wants to miss a lot of class time,” Bassett said. “I think every athletic director, in my dealing with, has been very committed to saying ‘Let’s be careful about missed class time.’”

King said she wants students to succeed academically, which is why she tries to schedule weekend games.

“In our scheduling practices, we try to limit the number of midweek games to as few as possible,” King said. “When midweek games are scheduled, every effort is made to try to schedule games against teams that are close geographically.”

“For softball and baseball, which is really weather dependent, if those weekends get rained out, then those are midweek games we are traveling three to four hours, which really isn’t ideal,” Pallozzi said.

Junior basketball guard Erin Woop said the team’s goal is to go into the league winning, as they have defeated all the Liberty League opponents they have played this year.

“We want to go in winning and showing the Liberty League that Ithaca College can compete with them,” Woop said. “I think that it will be a really big motivating factor for us and how we are going to play next year, and even this year, to show them what we are all about.”

Columnist Jonathan Beck discusses the positives behind the Bombers’ athletic team’s shift from the Empire 8 Conference to the Liberty League for the 2018-2019 academic year.