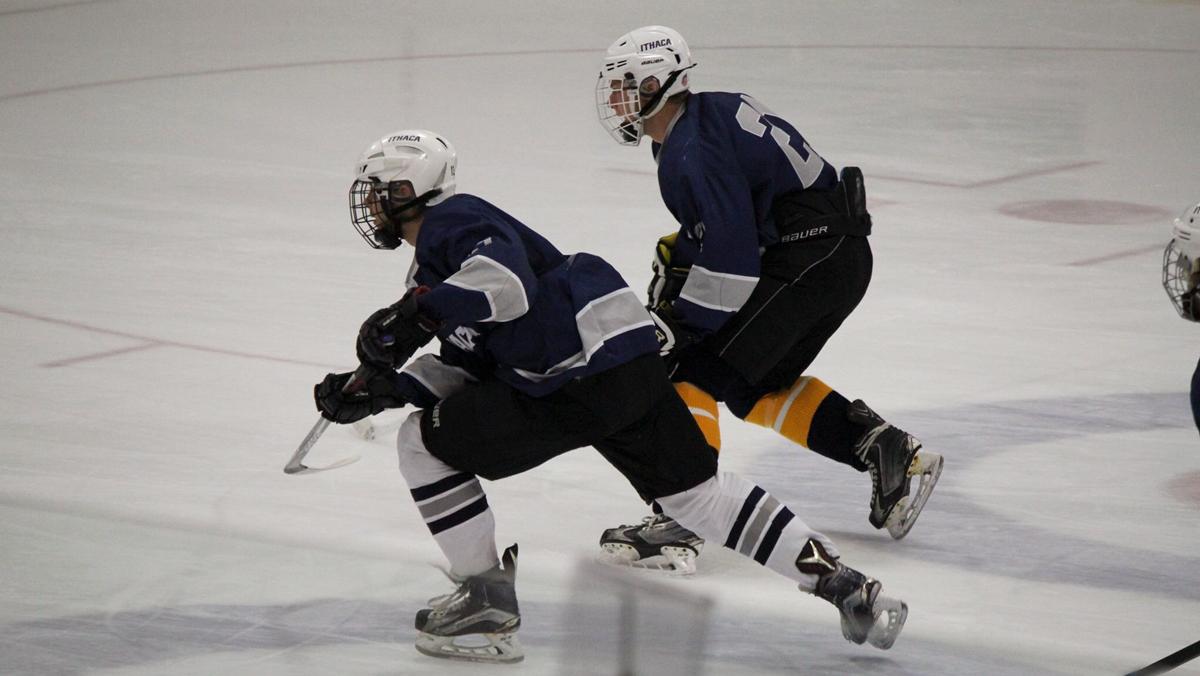 COURTESY OF AUSTIN MORLEY
From left, sophomore forward Austin Morley and junior defender Andy Rossler skate down the ice during their game against SUNY Cortland Oct. 1. The Blue and Gold lost 7–4 and have a 1–2 record.
By Jack Hamilton — Staff Writer
Published: October 4, 2017

After three games so far this year, the Ithaca College club hockey team is 1–2 on the season. The Blue and Gold won the game that matters most, though — its division season opener.

In nonconference play, the Bombers went 0–2 after losing 7–3 to SUNY Binghamton and 7–4 to SUNY Cortland.

The Bombers edged out the University of Rochester 4–3 Sept. 22 in Rochester, New York, in their division opener. Junior defenseman Andy Rossler said he attributes the win largely to the performance of junior goalkeeper Sam Attias.

“I think our first win, first and foremost, comes from our goalie Sam,” Rossler said. “He put up something like 40 saves — couldn’t have done it without that.”

Attias said he saw the performance as him stepping up to do his job to help ensure a victory.

“The main goal is to win the game, so anything I can do, I’m going to try to do,” Attias said. “My job is to stop the puck. I hate letting them in, so might as well just stop them.”

Following the game, Andrew Musto, the league’s commissioner, came up to Attias and not only praised his individual performance, but said that the Bombers look like the team to watch this season. Rossler said that hearing that comment goes a long way toward motivating the team.

“I think this is the year that’s going to bring us into the league a little more, make a name for ourselves,” Rossler said. “I think having him on our side and hearing him say that is great.”

The Bombers play in the West Division of the Upstate New York Club Hockey League. The other teams in their division are the University at Buffalo, Hobart College, the University of Rochester and Nazareth College, St. John Fisher, SUNY Brockport and SUNY Geneseo.

Sophomore defender Christian Monk said that anyone who wants to skate can try out, but the more experience a player has, the better for tryouts. The team normally keeps everyone who tries out just in case other people can’t make it to games, so they have enough players. The total number of players they can carry on the roster is 30. There are currently 20 people on the team and a player has not been cut in 10 years.

“Tryouts are usually three days long and that gives us a chance to see what the newcomers look like and who we would be able to pair for lines and how the team is looking for the upcoming year,” Monk said.

The team is coached by Oni Sutich ’15, who used to play on the club ice hockey team for the college.

Monk has been playing hockey his whole life and wanted to continue playing in college.

“Coming to a school with a club team would be great so I could play the game I love and meet some new people,” Monk said.

However, getting to practice is the trickiest part. Members of the team have to get rides from other players who have cars, as The Rink is a 15-minute drive from campus. Monk said that the distance impacts the team because players either don’t have rides or have homework to get done.

“To be honest, it stinks having to drive to The Rink,” Monk said. “When I was a freshman last year, it was not fun asking for rides all the time. It would be nice to walk to and from practice, then go to school. We could also have earlier practice times as well. If we were closer to school, more people would come on a consistent basis.”

Attias said that this season, one of the main focuses is conquering the league and trying to win as many division games as possible.

“There are actually certain games that matter more than other games,” he said. “Our focus now is going to be on those division games and making sure we win those. Our first win of the season, that was a division game. So if we can really come out for those ones and get the wins, I think we can make the playoffs and make a good run this year.”

Sophomore forward Austin Morley, who has two points, said the team is young and that he sees it as a positive.

“We’ve got a lot of young guys on my line, which is definitely a good thing, as we’re trying to build a foundation for the future,” Morley said. “Reese Farwell is a freshman on my line and has been solid. We’ve also got Matt Bartosz, another freshman, who got bumped to first line and did some work up there. I think it’s a very promising group of young guys who should be a big help this season and the next few years.”

The foundation is made, Monk said, by having fun with each other and letting any problems work themselves out.

“We like to get to know everybody and to have a fun time with each other,” Monk said.

Attias said that there are certain players who have been playing exceptionally well and that he believes that for the team to make a deep run, everyone needs to be playing at a high level.

“Hockey is a very team-oriented sport,” he said. “We need to have 15 guys that are ready to play at all times. This is definitely the deepest team I’ve been a part of here, so I’m excited to see what we can do.”