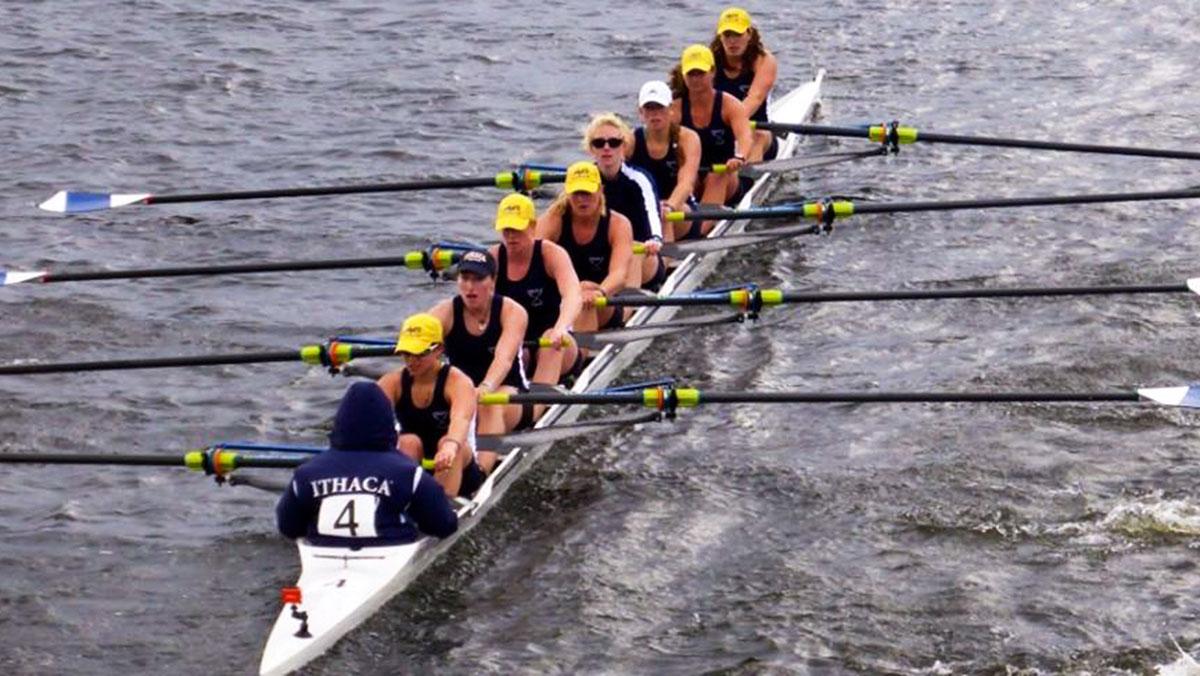 Courtesy of Susan Morley
The Ithaca College boat rows at the Head of the Charles Regatta from Oct. 18–19 in the Charles River in Boston. The Bombers’ boat finished in the top-10 for the second consecutive year.
By Karly Redpath — Senior Writer
Published: October 21, 2014

Oct. 18–19 marked the 50th anniversary of one of rowing’s most prestigious competitions: the Head of the Charles Regatta in Boston. For the third time in the last decade, members of the women’s crew and sculling teams were a part of this year’s record-setting number of entries and placed in the top 10 collegiate boats for the second year in a row.

While most members of crew and the sculling team aspire to row in the race once in their career, junior Emily Morley and senior Jennie Peterson had their second opportunity to row in the event this year. Peterson and Morley went from being the youngest rowers to make the boat that raced in the event last year to the only two who had prior experience racing at the event.

The Head of the Charles has drawn thousands of people to Boston since it began in 1965. This year, the two-day event attracted nearly 11,000 athletes from high school age to a 50-year-old-and-up division and also featured international, world-champion and Olympic rowers.

Peterson said being a part of such a well-renowned and beloved event in the rowing community is extremely exciting. She said over her past two years on the team, this race has come to hold a special place in her heart.

“I feel so proud to be a member of the IC crew team,” Peterson said. “It’s great because so many people would see us in our Ithaca gear and shout, ‘Go Bombers!’ It was awesome to receive that support all the way in Boston. It shows that our school deserves to be there and is respected in the rowing community.”

Morley said in order to make the Charles boat, each rower, depending on her weight and height, had a certain time she had to meet. She said the testing process to make the boat this year was challenging.

“I had to test three times to beat my personal record,” Morley said. “After falling short on my first two pieces, I went into my third piece very confident knowing that this was my time to push all those negative thoughts out of my mind. It’s funny how once you have the willpower to push yourself through walls nothing can really stop you from achieving your set goal.”

Junior Chloe Lewis, who rowed in the Head of the Charles as a high school student, has volunteered at the event for the past four years. She said Peterson and Morley share an intense bond, which makes them a great pair not only in their double boat this fall, but also in the larger boats they have rowed in together. She also said the college’s fourth-place finish at last year’s race gave the boat as a whole a mental head start because they would be starting before a majority of the other collegiate boats.

“It gave them a definite advantage because of their place in the starting order,” Lewis said. “Not having many people in front of you gives you a much bigger mental advantage and therefore an edge over the 50 or so other women’s eight’s that started after them.”

Peterson and Morley have established a bond over their past few years. Rowing together in a double this fall and participating in the Head of the Charles for the second year in a row is something Morley said has only brought the pair closer together.

“We push each other to limits that only rowers would understand,” Morley said. “Being able to compete in my second Head of the Charles with Jennie allowed me to have someone who I could look to and just give a look to and she would know exactly what I was thinking. Being in the same seats we were last year at the 2013 Charles was reassuring that I knew right behind me Jennie was pulling as hard or harder than me.”

Peterson said being the two youngest girls in the boat last year has allowed them to be closer than ever before and helped them succeed this year together.

“Although Emily is probably my No. 1 competitor on the team, she’s also my best friend,” Peterson said. “Sculling together and rowing at the Charles these past two years have brought us so much closer. We went from being the only ‘babies’ in the [first varsity boat] our novice year to being the only experienced Charles’ rowers this year. It’s crazy how much we have grown together, both on and off the water … I would do anything for her, and I know she would do the same.”