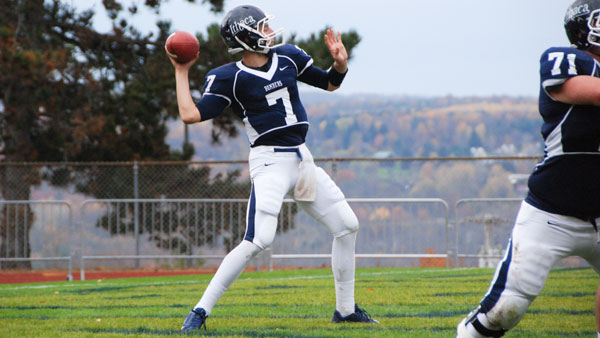 Though senior quarterback Phil Neumann returned to practice Oct. 30, junior Tom Dempsey will remain the starter for the Bombers as they travel to Salisbury University this Saturday, knowing a win will clinch a place in the NCAA Tournament.

“[The doctors] didn’t think I was going to be able to return, but here I am,” Neumann said after the game against the Frostburg State University Bobcats on Nov. 2.

Neumann fully participated in practices Oct. 30 and Oct. 31 and dressed for the Bombers 23–0 win against the Bobcats. After the game against Frostburg, he said he was pleased to be fully involved with the team but disappointed to be on the sidelines.

“Not being out there today has been the same as it was the past month,” Neumann said. “It’s tough. It was good to at least be able to put the pads back on and warm up and get a feel for things.”

Neumann has not played the last four games since injuring ligaments in his right elbow Oct. 5 during the Blue and Gold’s loss to Hartwick College. He has remained involved with the offense relaying play calls to Dempsey during games and practices as well as offering advice on opposing defenses. Dempsey said his relationship with Neumann remains strong despite the role reversal.

“Phil and I are good friends, and Phil is a terrific mentor,” Dempsey said. “He really knows his stuff, and he’s been here the longest out of our quarterback corps. He’s a tremendous help to the other quarterbacks and the rest of the offense.”

Dempsey has thrown a touchdown pass in each of the four games he started. In that span, he has had more than 800 passing yards. Despite his success, Dempsey said he is staying on level ground throughout the Blue and Gold’s playoff push, constantly looking at film for ways to fine-tune his game.

The most outstanding concern for Dempsey has been the fact that he has thrown an interception in the past three games. The turnover streak is in danger of being extended, as he will face Sea Gulls senior corner back Andre Carter. Carter was named a preseason all-American and has five interceptions on the season.

Junior wide receiver Vito Boffoli had five catches in the South Hill squad’s vital win against the St. John Fisher College Cardinals on Oct. 26. Boffoli said the wide receivers have not had difficulty adjusting to Dempsey as the starting quarterback.

“We’ve always worked with Phil and Tom,” Boffoli said. “I’ve been working with Tom since freshman year when we came in together. He’s a great friend, and it’s not a challenge at all.”

Neumann will continue to work with the second-team, sharing the reps with junior quarterback Ryan Condon. Bomber head coach Mike Welch said he was pleased with Neumann’s progression in practice. However, Welch reaffirmed that Dempsey will be the quarterback going forward.

Though Neumann is not on the field, he continues to be an upbeat leader for the offense. In practices, he cheers teammates on and talks with the coaching staff. He said he is doing his best to fulfill his responsibilities as captain.

“I try to keep everybody positive and still be a leader for the offense,” Neumann said. “I try to keep the running backs, the wide receivers and the offensive line up and in the right mindset.”

Neumann’s humility has not gone unnoticed by Welch. He said Neumann and Dempsey are on the same page heading into the final two games of the regular season.