Field hockey adjusts to plethora of injuries on back line 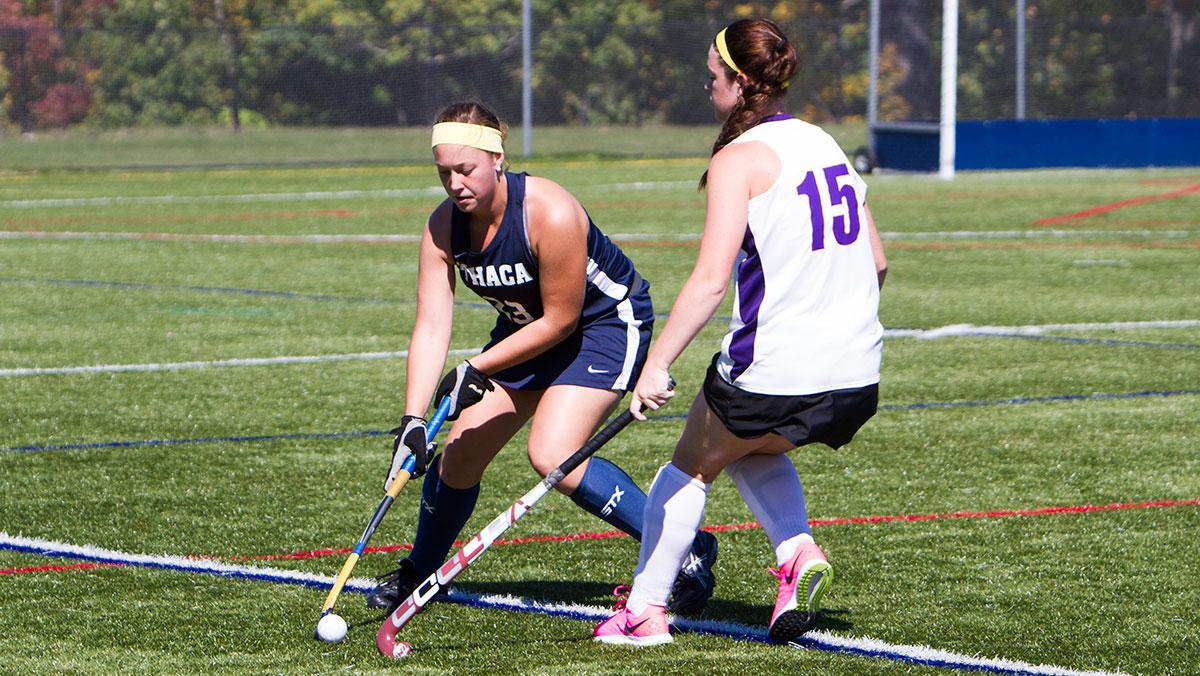 Jillian Flint/The Ithacan
From left, junior back Caitlin O'Brien fights for the ball with Nazareth College junior forward Catherine Willard during the Bombers' 2–0 win over the Golden Flyers on Sept. 27 at Higgins Stadium.
By Jenna Harner — Contributing Writer
Published: September 30, 2014

The day before the field hockey team’s Empire 8 tournament semifinal against Utica College on Nov. 11, 2013, then-sophomore back Laurel Shnider’s knee locked up. For Shnider, the injury occurs randomly and without warning.

“I could not move my leg,” she said. “I wasn’t able to walk on it. Some days with [the injury], I just wasn’t able to practice on it or play in a game, I never knew. I was honestly saying ‘I don’t think I’m going to be able to play tomorrow.’”

Nine months later, on the fourth day of preseason for the Bombers this summer, sophomore back Jessica Smith was practicing in a routine drill when, on one move, she tore her Anterior Cruciate Ligament.

“I was just cutting to the ball, and then I guess I planted my leg wrong,” Smith said. “It made this very awful sound, and I fell immediately. The trainers rushed over and handled me from there. I didn’t know what had happened. I’d never had an injury like this before.”

While Shnider was uncertain of her injury and when she would return to the field and Smith’s ACL tear sidelining her for the season, the Blue and Gold faced a challenge on defense. With two of its key defenders unable to play, the team was left to seek alternatives. Senior back and captain Sarah Pfeifle said the Bombers entered the season hoping to have a strong defense that could rotate with one another.

“We were expecting to have a solid six-person defensive line,” she said. “The defensive line is usually pretty small because we do not sub often, so having a line or five or six people would allow us to have a very tight defense while also being able to rotate positions and use our energy most effectively.”

The team knows position flexibility has to be an option if it wants to compete in a tough E8 conference, Shnider said. The defensive unit looked to the freshmen to step up into the roles that needed to be filled. Freshman forward Amanda Schell was one of those players, transitioning from a forward to a more defensive player. Schell started the first seven games for the Bombers at defense, playing all 70 minutes in four contests. Pfeifle said she had a seamless transition to the back line.

“As well as forward and mid, where she has more experience playing, she has very solid defensive skills and is a quick learner,” she said. “We were able to intertwine her into our defensive line while Laurel recovered.”

Thus far, Schell has been a good fit on a defense that has yet to allow a goal at Higgins Stadium this season. The strength and leadership of Pfeifle, along with junior back Caitlin O’Brien and last year’s Empire 8 Rookie of the Year sophomore goalkeeper Katie Lass, helped Schell transition into her new position. Shnider said she was proud of the way the freshmen stepped up.

“Everyone was pretty flexible with their positions, we really worked it out well,” Shnider said. “The freshmen did a pretty good job. We were really impressed with the skills they came in with.”

Schell wasn’t the only player to make an impact on the defensive line for the team. Transitions were made as midfielders were asked to step into a more defensive role. These players included Schell and sophomore Hannah Gerber. The skillsets Gerber and Schell offered made for a seamless transition into the low-numbered defensive unit. Pfeifle was especially impressed with the skills, speed and attitude that both women brought to the back line.

Injuries may take a while to heal, but once the healing and rehab process is completed, Shnider said, it will seem like the injury never even happened. After going through rehab, having surgery and receiving a cortisone shot this summer, she is set to be back on the field mid-season. While Smith’s injury may have her off the field the entire fall, she said she is eager to come back and is working with her team in any way she can.

“I’ve stepped into a motivational type of role,” Smith said. “Being there and supporting, giving some advice even though I’m not physically in, I can see on the field what’s been good for the team.”