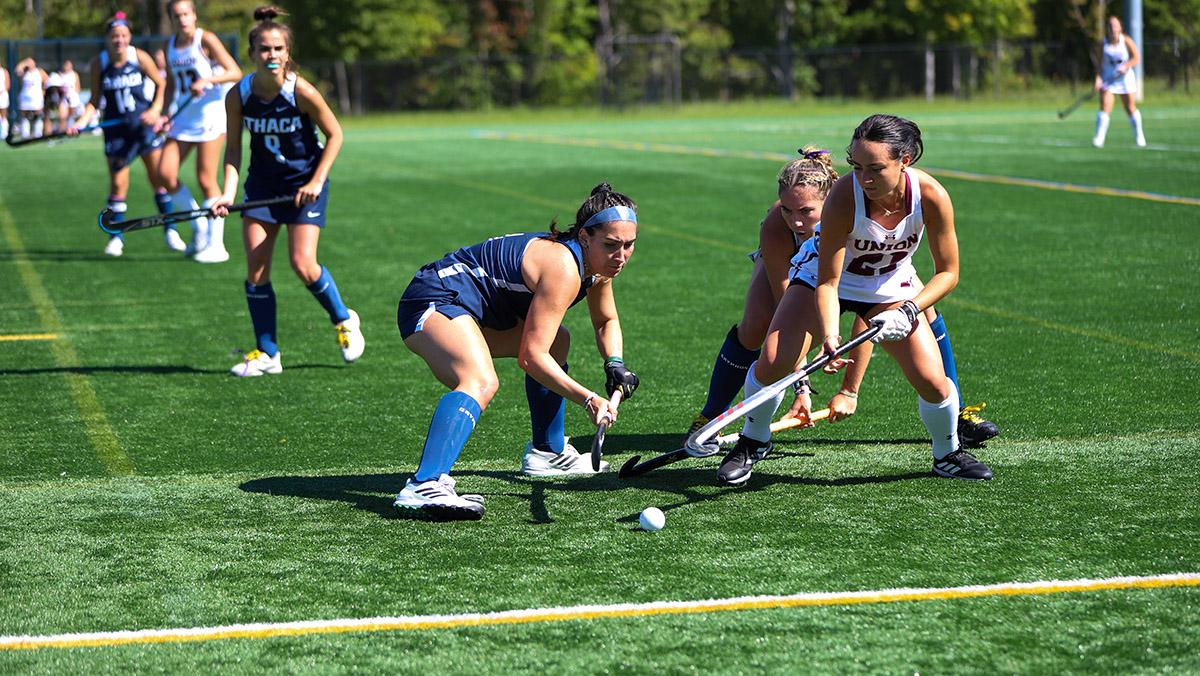 After two road losses against the SUNY Cortland Dragons on Sept. 14 and the SUNY Brockport Golden Eagles on Sept. 20, the Ithaca College field hockey team was quick to bounce back with a 3–0 victory over the Dutchwomen of Union College. The win, which opened up Liberty League play for both teams, brings the Bombers to a record of 5–2.

Despite multiple offensive opportunities on both sides of the field, the first quarter of competition was evenly matched and ultimately scoreless. The Bombers and the Dutchwomen were each awarded penalty corners at 8:14 and 12:25 into the period respectively, but neither proved successful. The teams tied 1–1 in both shots and saves.

The Bombers came into the second quarter ready to play, quickly earning two back-to-back penalty corners only three minutes into the frame. Although neither of the two resulted in goals, the growing number of opportunities evidently boosted the team’s confidence.

Following a breakaway by the Dutchwomen 4:25 into the second quarter that resulted in an empty net, first-year student midfielder Amalia Hickey came up with a massive defensive save for the Bombers’ that was vital to keeping the Dutchwomen off the board.

The Bombers were later able to tally the first goal of the game off a penalty corner with 5:14 remaining in the second frame. Sophomore striker Natalie Descalso sent the ball to the back of the cage, earning the point with an assist from sophomore striker Emma Garver.

The Bombers’ defensive line was dominant for the remainder of the half, with sophomore defender Bella McCollister and graduate student defender Allison Egan leading their team as playmakers in the backfield.

The South Hill squad entered the second half strong, dominating the majority of possession time and outshooting the Dutchwomen 6–1 in the third quarter. The team was easily able to tally two additional goals throughout the frame, the first of which was registered with just over seven minutes remaining.

Senior striker Morgan Mullen scored the second goal of the game, following a pass across the circle from senior striker Elizabeth Pillow. The third and final goal, assisted by first-year student striker Brenna Schoenfeld, was put up by Descalso with 3:50 left in the frame. The goal marked Descalso’s second of the competition and fifth of the season.

The Bombers solidified their 3–0 victory with powerful defensive play throughout the final quarter of the game. Although the Dutchwomen outshot the Bombers 5–0 in the frame, the Bombers’ graduate student goalkeeper Macy Brandwein was unrelenting in the cage. Brandwein tallied three saves in the quarter and a season high eight throughout the game, ultimately shutting out the Dutchwomen.

Associate head coach Mo Ordnung said that she is very happy with the adjustments that the Bombers’ defense has made following the losses of their two previous games.

“The more we play, the more our defense can figure out what works and what doesn’t,” Ordnung said. “They’re really starting to develop their own style of play.”

As their season progresses, head coach Kaitlyn Wahila said that steady improvements will be critical when it comes to winning more valuable in-conference games.

“With each opponent that we have, we have an opportunity to get a little bit better each day,” Wahila said. “We just need to continue to work on the things we need to work on to be able to execute and compete at a high level.”

The Bombers will next take on the University of Scranton Royals in a road matchup at 7:30 p.m. Sept. 28 in Scranton, Pennsylvania.