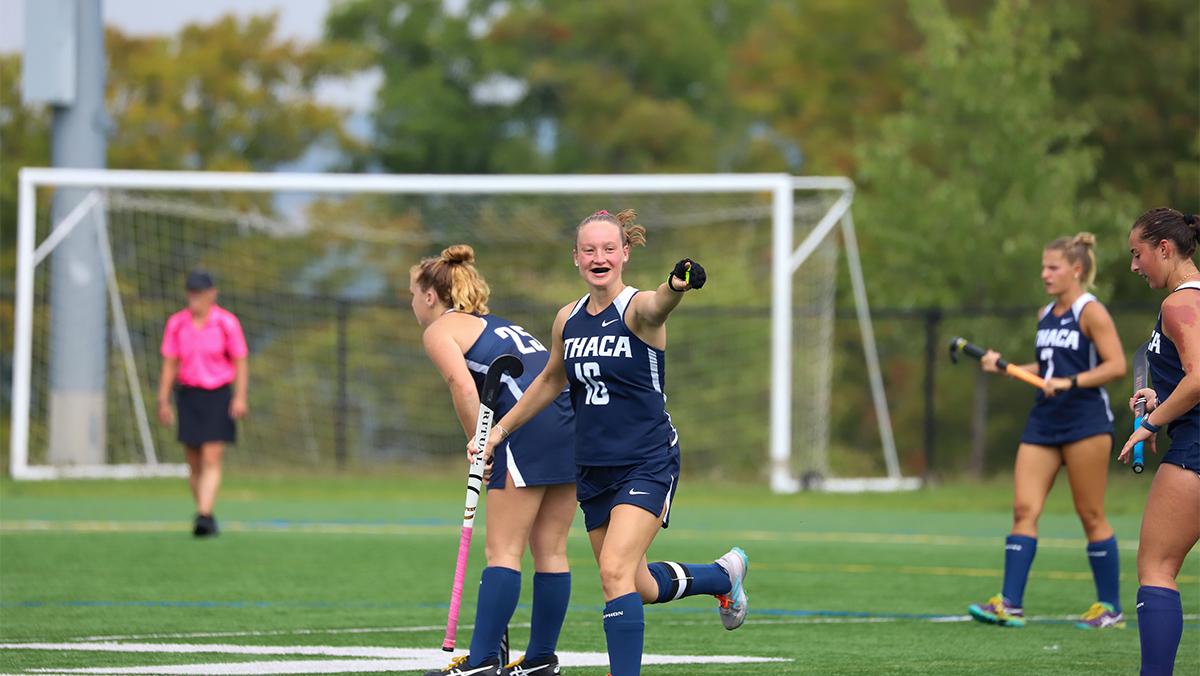 After kicking off the Fall 2022 season with a 2–1 victory against the SUNY Geneseo Knights on Sept. 2, the Ithaca College field hockey team made its home debut at Higgins Stadium with a huge 4–1 win against the Cardinals of St. John Fisher University.

The win marks only the third in matchup history, breaking the Bombers’ seven game losing streak to the Cardinals spanning from 2014 to 2021. It brings the Bombers’ record this season to an undefeated 2–0 after their first week of competition.

Although the Cardinals started the game with initial possession, the Bombers came in strong from the very first whistle with sophomore striker Natalie Descalso earning a field-changing turnover that led the team directly into Cardinal territory. Off the breakaway, Descalso was the first to test the Cardinals’ junior goalkeeper Sophia Trozzi only 1:44 into the game, and the Bombers refused to let up from there.

Trozzi earned two saves in the cage before her shields were broken by senior midfielder Arla Davis, who put the college on the board with 11:46 remaining in the first quarter. The unassisted goal marked the first of her career as a Bomber, and the boost it gave to the team’s confidence was evident.

Graduate student midfielder Jacqueline Mirabile was a force to be reckoned with in the defensive midfield, managing to keep the Cardinals out of Bomber territory for the majority of the first quarter. However, the remainder of the frame was held scoreless by Fisher’s young defensive line. First-year Cardinal midfielders Haley Acevedo and Emma Muchow refused to back down against the Bombers’ offense.

Fisher’s chemistry had clearly improved from one quarter to the next, for the Cardinals had managed to spend much of the second quarter in Bomber territory. The frame was ultimately scoreless with the help of Ithaca College’s graduate student goalkeeper, Macy Brandwein, who came up with an unbelievable save on the Cardinals’ first penalty corner of the competition 3:07 into the frame.

The Bombers came into the third quarter hot with Mirabile immediately sending the ball into Cardinal territory. The Bombers’ impressive offensive line was led by first-year striker Brenna Schoenfeld and junior striker Avery Moses, as well as sophomore midfielder Meara Bury. The squad earned a prodigious four penalty corners in the quarter, three of which proved successful.

Mirabile, accompanied by senior midfielder Nicole Fortunato and senior striker Elizabeth Pillow, put up points for the Bombers during the third quarter, ultimately securing the team’s win over Fisher.

The Cardinals put up a commendable effort in the final quarter of the competition, managing to dominate offensive possession for the first time all game. The Bombers’ junior goalkeeper Alex Clough made her first appearance of the season in the quarter tallying three saves on the quarter before the Cardinals’ first and only goal of the game was scored by sophomore forward Molly Fisher with just under three minutes of competition remaining.

Head coach Kaitlyn Wahila said everything the team had been working on in practice had been executed on the field, ultimately leading to the team’s valuable success.

“Positionally, all over the field, we did exactly what we needed to do to make this win happen, and that makes us really proud,” Wahila said.

With the team’s next competition quickly approaching, Wahila said she’s certain of her squad’s ability to handle the short turnaround.

“We’ll still be full of energy and we always have a gameplan,” Wahila said. “I’m confident that with a day of rest and a good day of practice, we’ll be able to compete at the same level.”

The Bombers will next take on the Misericordia University Cougars from Dallas, Pennsylvania, in a non-conference matchup at 7 p.m. Sept. 7 at Higgins Stadium.