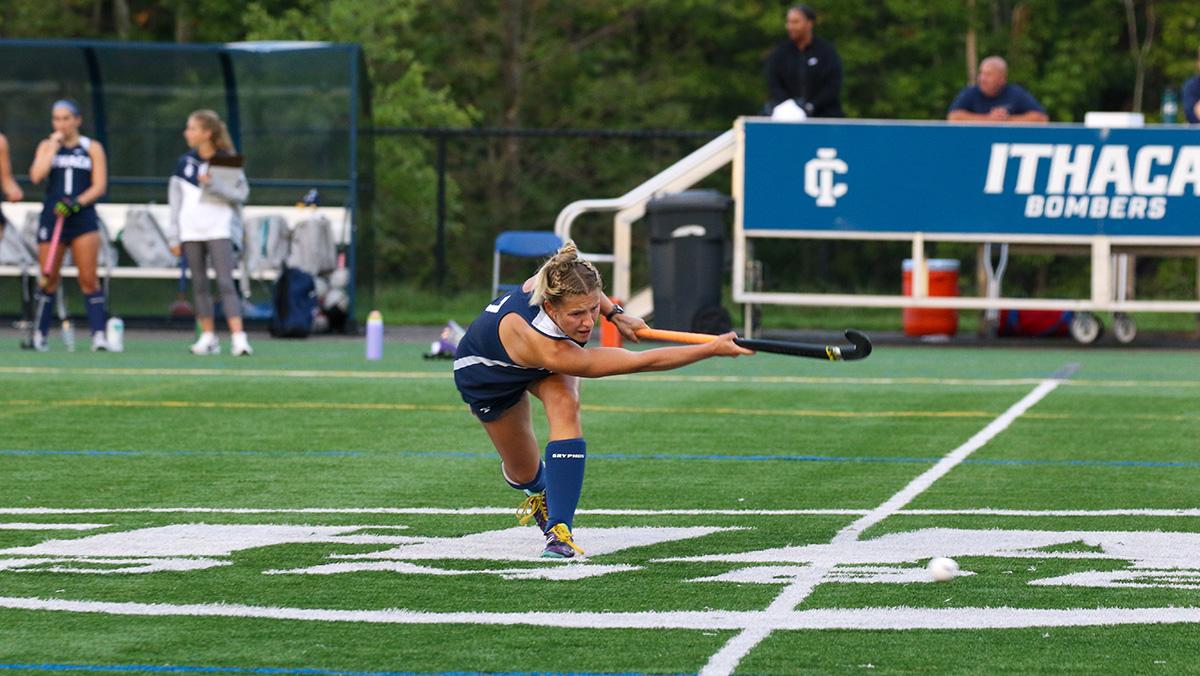 The Ithaca College field hockey team lengthened their winning streak to 3–0 following a non-conference 3–0 victory against the Cougars of Misericordia University under the lights Sept. 7 at Higgins Stadium.

Within the initial period, the overwhelming amount of midfield play was dominated by the Bombers’ first-year striker Brenna Schoenfeld and graduate student defender Allison Egan. The pair created some valuable offensive opportunities for the squad that eventually led to their first penalty corner early in the quarter. However, the notable defense from both teams ultimately rendered the first quarter scoreless.

The Bombers immediatly jumped on the opportunity to dominate possession to start the second quarter. Senior striker Morgan Mullen proved to be a relentless offensive force in Cougar territory, consistently working to create scoring opportunities for her team until one ultimately came to fruition. Mullen put the Bombers on the board only 1:47 into the second quarter of competition. The goal, assisted by junior striker Avery Moses, registered Mullen’s first of the 2022 season and the 23rd of her career.

The Cougars came into the second half ready to play, challenging the Bombers’ possession count for the first time all game. The Cougars’ offense was led by first-year striker Tatyanna Lainez, who was sure to make her presence known in Bomber territory. Although the Cougars created some dangerous offensive opportunities, Egan, accompanied by sophomore defender Bella McCollister, made shutting them down look easy.

The Bombers were able to reclaim control of the third quarter quickly, notching six shots on the Cougars’ first-year goalkeeper Sarah Bogina. The rookie stood tall in cage, earning some tremendous saves to keep her team afloat, before ultimately allowing the Bombers’ second goal of the match by senior striker Elizabeth Pillow.

The final quarter of competition proved triumphant for the Bombers as they quickly earned their third penalty corner of the game only 1:21 into the period. Although the Bombers came up empty handed, the offensive opportunities didn’t stop there.

On a 30-yard fastbreak, Mullen managed to send a clean pass to sophomore striker Natalie Descalso, who was able to rocket the Bombers’ third goal into the back of the cage a little under halfway into the quarter. From there, the only opponent left for the Bombers was the clock.

Head coach Kaitlyn Wahila said that although the initial quarter wasn’t as fast paced as usual, she’s proud of her team for keeping the energy high.

“It took us 15 minutes to get into the groove of things,” Wahila said. “But I’m glad that we stayed the course, trusted the four quarter process, and were able to get things done.”

Heading into their next competition, Wahila said she looks forward to seeing her offensive line keep up their hard work.

“[Mullen], [Descalso] and [Pillow] all came out with some huge striker energy,” Wahila said. “If our strikers can re-defend and regain possession, that is so huge.”

The Bombers will next take on the Hartwick College Hawks in a non-conference matchup at 1 p.m. Sept. 10 at Higgins Stadium.