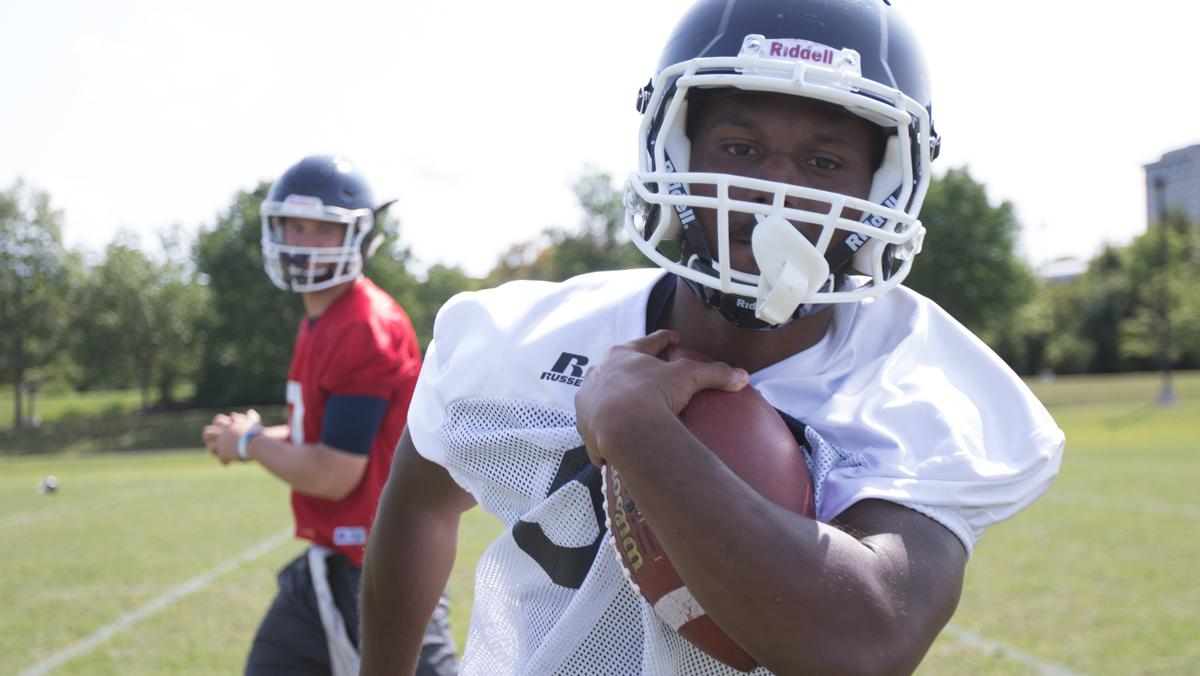 The 2017 season will be one full of firsts for the Ithaca College football team. It will be its first season under new head coach Dan Swanstrom, its first as a member of the Liberty League Conference and first year with senior quarterback Adam Fron as the Bombers’ starting quarterback.

The Bombers are coming off of a 5–5 season in 2016, going 5–0 at home and 0–5 on road. Heading into his first season on the South Hill, Swanstrom said he has a team that is set to succeed.

“We have a lot really talented seniors this year,” Swanstrom said. “If we had gone 1–9 or 2–8 last year, I would be more worried. But after a .500 season with a lot of close games, it’s just about tightening the details at this point.”

The Bombers will have a new face leading them from the sidelines for the first time in 23 seasons after the retirement of coach Mike Welch. The team will begin to transition into a new style of play with Swanstrom taking over the head coaching role.

“He’s bringing in a new, fresh perspective, and the whole team is going to be a lot different just from new systems and whole new coaching staff,” Tristan Brown, senior starting running back, said. “There has been a little bit of an adjustment period. But he’s thrown a lot at us, but we’ve been able to run with it and make it work. By the time it is all said and done, we are going have a pretty good team.”

Swanstrom brought in an entirely new coaching staff to help execute his vision and said the players have handled the coaching transition well this far and that everyone seems to be getting along with each other.

Senior wide receiver JR Zazzara said the players are optimistic that Swanstrom’s competitiveness and urge to win will keep the team together and focused.

“He wants to win and get after it,” Zazzara said. “A lot of players see his competitive nature, and we really can’t wait to follow him into the battle. He’s a real good guy to play for and a real fun guy. A lot of guys are liking him a lot.”

Going into his first season, Swanstrom said he does not have any long-term goals for the season and will focus on each individual game as it comes.

“My expectations are about us,” Swanstrom said. “Our focus is on how well we can practice each day and whether or not we can go 1–0 each week.

Butterfield Stadium seemed to have a large impact on the Bombers’ success last year, as they won all of their games on the South Hill but were unable to win a single game outside of Ithaca. The Bombers were outscored 147–70 in all five of the road games they played and were unable to record a single win.

Brown said the Blue and Gold will need to do a better of job of staying focused while playing at unfamiliar stadiums.

“A lot of the times on the road, it’s so easy to get distracted and caught up in being in a new environment, but if we can stay focused, we can be fine,” Brown said. “We know what we’ve been focusing on all week. We just need to do our job and not get too distracted.”

The South Hill squad scheduled all five of its non-conference games with teams from the Empire 8 conference, such as Alfred University, Brockport, St. John Fisher, Utica and Cortland. However, it will face new challenges with matchups against University of Rochester and Rensselaer Polytechnic Institute on Oct. 7 and Oct.14, respectively.

Entering the Liberty League will give the Bombers opportunities to play teams they have never played before, but Swanstrom said none of that matters.

“I’m not worried about who we’re playing nor have I experienced either league, so I don’t know much about what we’re coming from or what we’re joining,” Swanstrom said. “I’m just worried about us at this point.”

Brown said he is intrigued to play in different conference this year and is excited for the team to prove itself to new opponents.

“I think it’s really exciting because we’re playing a bunch of teams that we’ve never played before,” Brown said. “We’re all so used to the Empire 8 teams, but it’s definitely exciting. Coming to a new league will give us a little extra motivation to not get pushed around by a team that’s been there for a while and show them that IC has a reason to being in this conference.”

The South Hill squad will look to improve its offensive consistency this year with Fron under center after coming off of a season in which it outscored its opponents by only one point.

Fron never started a game during his first three years at the college but saw time in five of the Bombers’ games in 2016, in which he completed 11 of 25 passes for 84 yards with one touchdown and one interception.

Swanstrom said he has high expectations for his offense this season but has not seen enough progress from his players yet.

“I’m just not sure what we are right now,” Swanstrom said. “We have a first–time starter at quarterback and some first–time starters at offensive line, so it’s unclear if we’ll be able to run the ball the way we want to. I see glimpses — but the question remains if we can be consistent.”

Defensively, the Bombers are bringing back eight players who started in at least four games in 2016, anchored by senior linebackers Kenny Bradley and Dan Loizos, who had a combined number of 194 tackles last season.

The Bombers’ defense posted two shutouts last season and will be welcoming a new player from the other side of the ball as senior Brad Helmkamp has been moved from fullback to defensive tackle. Swanstrom said this decision was made to keep a talented football player on the field.

“There isn’t much of a fullback role in the offense we’ll be running this year and he jumped on the opportunity,” Swanstrom said.

As always, the Bombers will end their season with their annual matchup against rival SUNY Cortland for the 59th annual Cortaca Jug game. The Bombers have lost the previous seven games. While it is an event that galvanizes the college’s campus for a day, Swanstrom sees it as simply another football game.

Correction: An earlier version of this article misquoted Tristan Brown’s statement regarding the team’s talent.