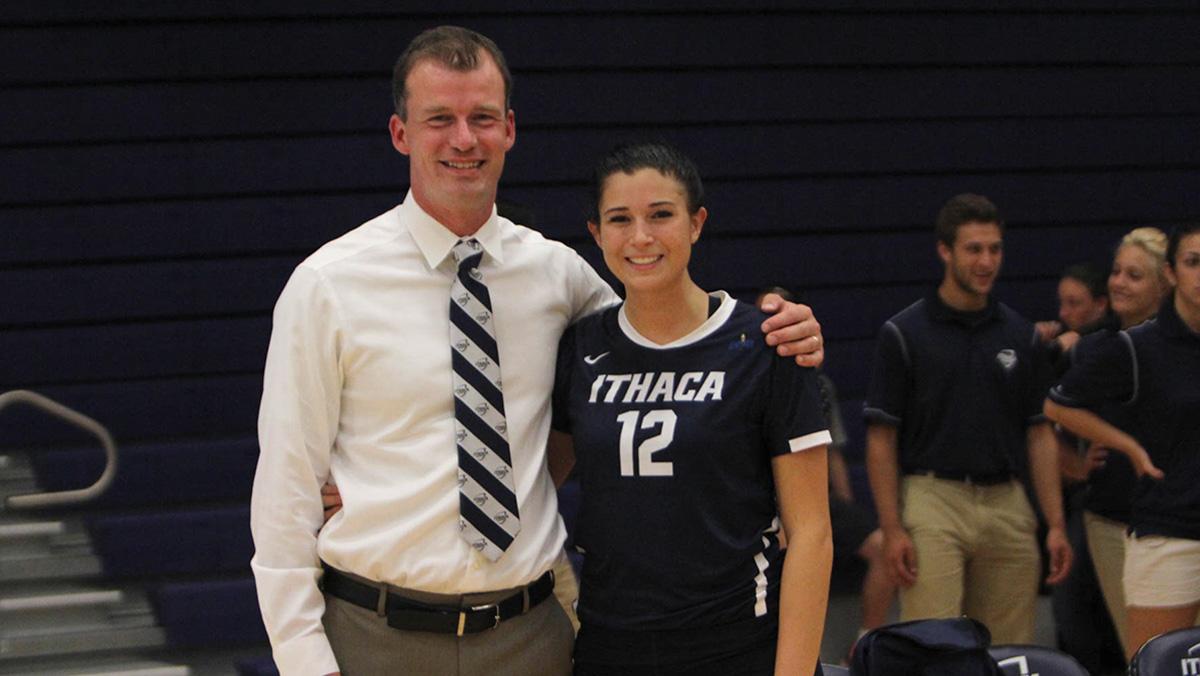 Volleyball head coach Johan Dulfer may be new to Ithaca College, but he knew one familiar face when he arrived: sophomore Tara Stilwell. Dulfer was Stilwell’s coach last season at Clarkson University, and now the two represent the Blue and Gold.

After 10 years of coaching at Clarkson, Dulfer said, he needed a new adventure. He was hired in February and assumed his position as head coach March 7. The Bombers and Clarkson are competitors in the regular season — they faced each other in a match Sept. 3.

“That gym was my home,” Dulfer said, prior to the match. “It is going to be tough trying to beat them. In three years, they have not lost a season’s match. I was there when it started, and now I will be back in that gym trying to break the streak.”

Stilwell said Clarkson was not a good academic fit for her and she was planning to only stay there for a year. She said she was looking to go back home to Colorado until Dulfer suggested she look at Ithaca College.

“When he told me Ithaca was good, I considered it,” Stilwell said. “I wouldn’t have looked if he wasn’t here, but I am glad he did.”

Stilwell said some of the players from Clarkson think she left for Dulfer.

“When I left, there was a girl, and she said, ‘Obviously, you aren’t transferring to Ithaca for volleyball because they aren’t good,’” Stilwell said. “I want to prove to them that the Ithaca level is good and we have a chance to contend.”

She said this team gets along better than her team at Clarkson did.

“I feel like I was super welcomed, even though I came from a different school, which is very reassuring,” Stilwell said.

As far as having Stilwell as a teammate, junior Izabella Mocarski said she loves it because she is a funny, positive and hardworking person.

“As crazy as it sounds, she fits so seamlessly with our team that I almost forget she used to be an opponent — she’s truly a Bomber at heart,” Mocarski said.

Dulfer said Stilwell is a calm player and that helps her in the position she plays. He said she makes it look effortless and that she could fit in with any group.

“She fits in well with this team because they are a unique group of women,” Dulfer said. “I think she was scared because she only knew them from playing against them, but she is a Bomber now. They have adopted her very quickly.”

Before that game, Dulfer said the Bombers wanted revenge and that Clarkson’s team did not want to lose to its former coach.

“For everyone, there will be emotions,” Dulfer said. “We will both be very motivated, extra motivation on each side.”

The Bombers will be joining the Golden Knights in the Liberty League starting in the 2017 season.

Mocarski said the team has gotten stronger in overall confidence and leadership abilities on the court.

“We know we have to rise to the expectations and work harder than we’ve ever had to work before if we want to be successful and get to where we want to be,” Mocarski said.