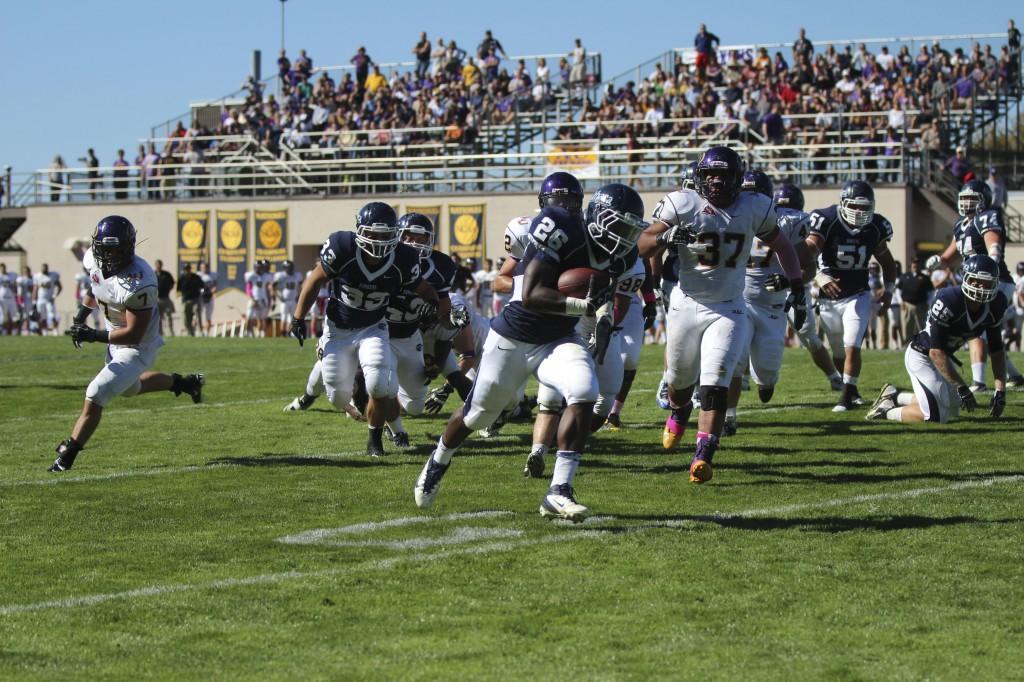 The Bombers bounced back with a 17–6 win against Alfred University after a misstep the previous week against Hartwick College. Despite playing without Phil Neumann, the Bomber offense had its most efficient game since week one. Each of its three scoring drives lasted more than five minutes and covered at least 70 yards. Neumann’s replacement, junior Tom Dempsey, put in a solid, composed performance last week, completing 70 percent of his passes and committing zero turnovers.

The Pioneers also enjoyed an offensive revival last week at Frostburg State beating the Bobcats 44–27 after being shutout at home by Salisbury University the previous week. Senior running back Jake Larson set a single-game school-record with five rushing touchdowns. Utica junior quarterback Connor Butkiewicz completed 31 of 36 passes for 431 yards, including two touchdown passes to junior wide receiver Anthony Acevado, who also set a single-game school-record with 252 receiving yards, earning a place on the d3football Team of the Week.

The onus is on the Blue and Gold offense to continue controlling the time of possession. The more times the Pioneers are on offense, the more likely they will be to score. When the Pioneers get the ball, the Bomber defense will have to put pressure on Butkiewicz, and if he completes more than 85 percent of his passes again, this could be a high scoring game.

The Bombers’ offensive struggles were a consequence of their offensive line failing to establish itself while run blocking. The offense’s success last week was a result of the line successfully establishing itself. The Saxons could not penetrate the backfield, and senior running back Rakim Jones had room to operate based on the line’s ability to open up holes and cut-back lanes to run through.

More importantly the line gave Dempsey time to find open receivers. Junior center Bobby Garone said the line empathized the idea of staying with its blocks and finishing each play while preparing for Alfred and future opponents.

“We just concentrated on our combination blocks and straining through and finishing,” Garone said. “That was a problem in earlier games, even games that we won, just finishing our blocks, and we really focused on that this week.”

The Bomber offensive line has a favorable matchup, as the Pioneer defensive line has only 10 sacks and has allowed 4.7 yards per rushing attempt through five games this season. Last year, the Pioneers’ defense allowed seven yards per attempt for Clay Ardoin ’13, as the Bombers rushed for more than 200 yards. All these trends bode well for the Bombers chances at establishing the run on Saturday.

In the previous two meetings, the Bombers limited former Pioneer quarterback Andrew Benkwitt to 299 yards in each occasion, the most passing yards against Bombers last season. Butkiewicz still has a long way to go if he wants to have a career as illustrious as Benkwitt. Butkiewicz can start by limiting his turnovers, as he has thrown seven interceptions through five games. It’s a tough task, as he faces a Bomber secondary that has recorded an interception in every game this season. Senior strong safety Tom Scanlon recorded an interception last week. Scanlon said the secondary will look to confuse Butkiewicz.

It also should be noted that the Pioneers have two receivers with more than 40 receptions — Acevado and senior Jamie Murphy. The Bomber defense needs to be aware of Butkiewicz’s potential, by playing relatively soft in the secondary but also being opportunistic.

The last two unbeaten teams in the Empire 8 meet this Saturday when No. 19 St. John Fisher College travels to Salisbury. The Cardinals and Sea Gulls are each 2–0 in the Empire 8, and the Bombers still have to play both of them. The two teams will try to establish the run, and both teams have strong defenses. This will be the toughest test the Sea Gulls’ triple-option offense will face before the South Hill squad comes to town in November.

Conversely, the Cardinals will have to keep the giveaways to a minimum against a defense that has 11 takeaways through five games. If they win, the Cardinals will travel to Butterfield Stadium next week, knowing a win can clinch the automatic qualifier for the NCAA tournament. If Salisbury wins, the Sea Gulls will be favorites to win a third-straight conference title.

For comprehensive coverage of Saturday’s game, follow @IthacanSports and @Christian_Araos.