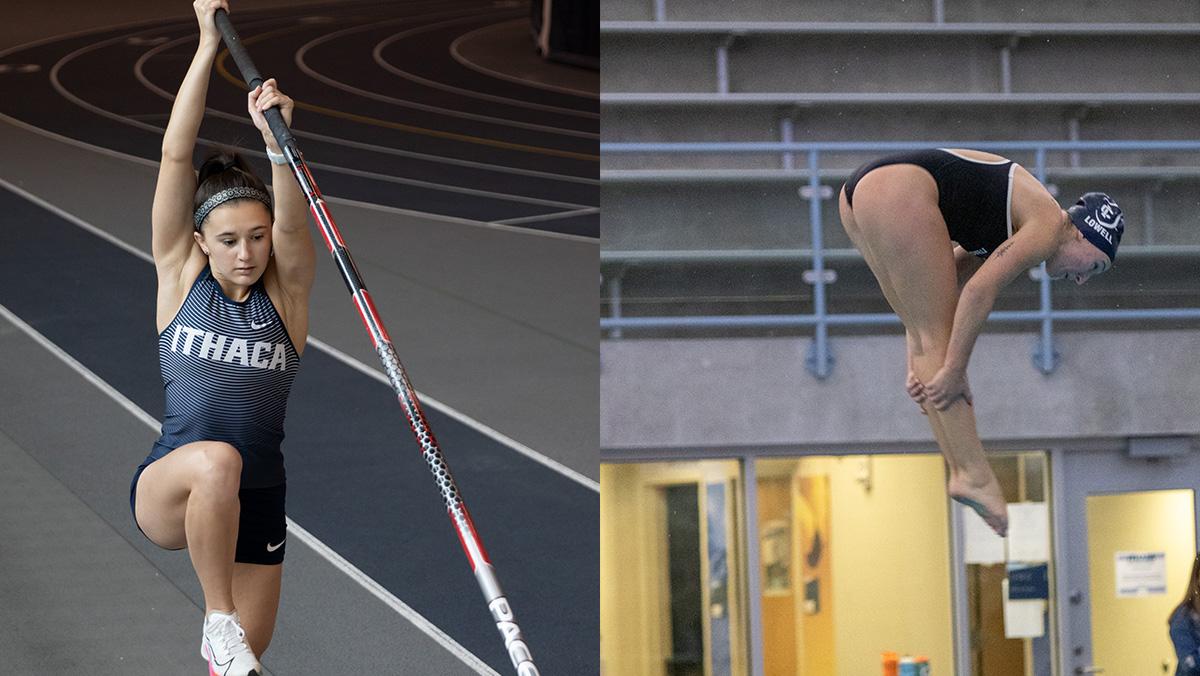 A total of four Ithaca College athletes won national titles over the past week, garnering two individual NCAA championships each for the Bombers’ track and field and swimming and diving programs.

Matheny, who won the outdoor title in 2021, had a dominant season for the Bombers. Going into the championship meet, she had cleared 3.90 meters five times, with only one other athlete in the country managing to complete the feat.

Matheny cleared 3.95 meters on her first attempt but failed to clear 4.00 meters, something she had achieved twice this season. However, Sarah Voit from Oberlin College, her last remaining competitor, also could not clear the bar, and Matheny won on a tiebreak by having fewer attempts than Voit.

Leonard-Osbourne won the first national title in his career with a mark of 6.76 seconds in the finals. He also sped to a 6.72 time in the preliminaries, breaking his own program record for the fifth time and setting the sixth-fastest time in Division III history.

Over the course of the season, Leonard-Osbourne compiled a perfect 13–0 record in the event, including preliminary heats. With the win, he also earned the first individual national title in program history.

As for the swimming and diving programs, Lowell posted a score of 486.45 in the finals to win the NCAA title for the 3-meter event. With the victory, Lowell became just the fifth athlete in the history of the women’s swimming team to win an individual national title. The last member of the program to win a NCAA championship was Nickie Griesemer ’17, who won a pair of titles in the 1- and three-meter dives in 2018 as a graduate student.

Wadsworth’s victory in the 100-yard backstroke made him the first national champion for the men’s program since 1996, when Colin Herlihy ’96 brought home titles in the 100- and 200-yard backstrokes. The sophomore’s championship was earned by posting a time of 46.45, a mark that broke his own team and Liberty League record as well as breaking the Division III national record.