Freshman attack making name for himself on men’s lacrosse team 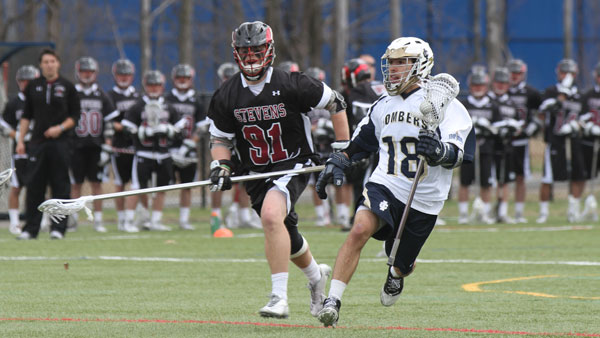 John Januszkiewicz: The last name may be troublesome to say, but it doesn’t cause as much trouble as Januszkiewicz himself does for opposing defenses. Januszkiewicz has already surpassed the expectations set by his coach and teammates in the preseason. The freshman attack is the second-leading scorer on the men’s lacrosse team with 34 goals and 14 assists.

“We knew he was going to contribute, we just didn’t know it would be this much, so it definitely has been a pleasant surprise,” head coach Jeff Long said. “He has a great lacrosse IQ and is a very good learner. It’s great to have those things in a young player.”

His high lacrosse IQ, such as his knowledge of the game and good stick skills, may be attributed to the type of background Januszkiewicz had as a kid. Growing up in Buffalo, N.Y., in a family with a history of lacrosse players, Januszkiewicz was able to find his love for the game at the young age of four when he first began playing. He watched on as his two older sisters played the sport at Orchard Park High School and as his cousin won two national championships for lacrosse at Syracuse University.

As Januszkiewicz progressed through the years playing the sport, his skill level grew as well. Januszkiewicz is not short of accomplishments, as he was an All-American, team captain and MVP during his senior year at Orchard Park High.

Mostly recruited by Division III schools, such as Nazareth College and St. John Fisher College, Januszkiewicz said he had not considered Ithaca College as one of his top choices until Long gave him a call and told him to come up for a visit.

Januszkiewicz started in the very first game of the season, and this is where he began making a name for himself as a scoring machine against Oswego State on February 25 at Higgins Stadium. In the season opener, Januszkiewicz scored four goals to lead the Blue and Gold past the Lakers 18–7. Januszkiewicz caught a hot streak in late March where he averaged three goals over a seven-game span, including an eight-point outing in a 20–4 win against Utica College on April 9 at Higgins Stadium.

Now at the tail end of the Bombers’ season, Januszkiewicz has the third most assists, behind Manilla and Slawta. Januszkiewicz said Slawta has been a positive role model for him as well as the other freshmen on the team during the season.

“He has taken me under his wing and showed me tips on how to improve my game all season long,” Januszkiewicz said.

Because junior attack James Manilla and senior midfielder Jake Long are both having low scoring years this season in comparison to previous years, Slawta has been a key focal point in the Bombers’ offense this spring. Slawta has been among the top two scorers on the team since his sophomore year and now looks to help out his teammates as a mentor.

“I noticed John and I play the same position, and I watched how he played the game early in fall season,” Slawta said. “Now, I just give him tips on how to get better, but I never give him the full answer to his problems.”

Slawta said the entire freshman class is really talented overall and has picked up the college game surprisingly quickly.

“[In] previous years we would have to slow down the pace, but from the beginning everyone was on the same page,” he said. “Specifically John. I didn’t expect him to play too much or have this much of an impact, but now he plays every minute and is contributing, too.”

To remain a top-five scorer in the Empire 8 conference as a freshman, Januszkiewicz knows he needs to keep improving his game.

“I need to get into the weight room to get stronger and listen to the coaches because they always have great advice for me,” Januszkiewicz said.

Long said Januszkiewicz’s style of play is physically and mentally tough and labeled him as a “grinder.” Long said he admires Januszkiewicz’s ability to take hits from defenders but still continue to keep pushing forward throughout the game.

“He sees the field really well and goes through all his options as an attack,” Long said. “He has a hockey background, and that helps correlate over to lacrosse with toughness and hand-eye coordination.”

Januszkiewicz attributes the scoring to neither his talent on the field as a scorer nor his IQ. Instead, he said his teammates help him score and have developed camaraderie from playing with each other throughout the year. Januszkiewicz said it doesn’t feel like there’s any difference from the seniors to the freshmen, just one collective unit.

“I work really well off ball,” Januszkiewicz said. “It’s the other five guys on the field who are finding me, and I just catch and shoot. We are really like a family, and how close we all are shows on the field.”