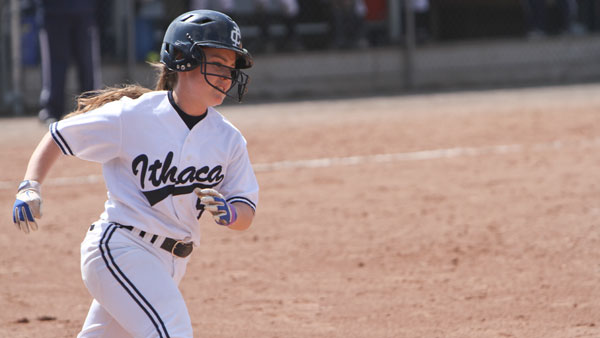 Orlando Leon/The Ithacan
Freshman outfielder Jessie Fleck rounds first base during the softball team’s game against Utica College on April 12 at Kostrinsky Field. Fleck currently has the second-best batting average for the Bombers for the 2014 season.
By Alexis Forde — Staff Writer
Published: April 16, 2014

Freshman outfielder Jessie Fleck cheered on senior infielder Julianne Vincent as she put on her left batting glove, then her right glove and finally her helmet — a ritual she practices every game while waiting to bat in the on-deck circle.

As she waited to be called up to the plate during the softball team’s game against Utica College on April 12 at Kostrinsky Field, Fleck swung both of her arms in a circular motion and began taking practice swings. Afterwards, she carefully watched the opposing pitcher and timed each throw, swinging into the air as each pitch crossed over the plate.

The last thing Fleck does before stepping into the batter’s box is look at head coach Deb Pallozzi for last minute instructions. After Pallozzi gives Fleck some hand signals and motions to her to swing the bat rather than bunt, she is finally ready to face the pitcher.

Going through this familiar ritual in the on-deck circle helps keep Fleck, a mathematics major, calm and focused, and has allowed her to hit .373, which is the second-best batting average on the team — an uncommon accomplishment for a freshman.

Fleck credits part of her success at the plate this season to what she has learned so far in practice. Fleck has been playing softball for eight years and attributes the repetition of practice toward her growing success.

“Every time at the plate, you do what you’ve been doing at practice, and I guess it’s just been working out,” she said.

During the season, Fleck practices with the team for three hours six days a week. Practice usually begins with running and dynamic stretching followed by throwing. After, the team follows Pallozzi’s practice plan for that day, which can consist of either hitting, base running, fielding or a mix of all three.

On practice days consisting of hitting, Fleck usually either practices hitting with a live pitcher or a pitching machine. Though she has had experience with both, Fleck said live pitching, where an actual pitcher throws to the players during practice, is what prepares her the most for games.

“Machine is good for [hitting a] consistent spot every time,” she said. “Live pitching definitely gets you ready for what you’re going to face in an actual game situation.”

Being on the team has also taught Fleck she is not just playing for herself anymore like she said she was in high school, but rather she is playing for the Blue and Gold’s program as a whole with the rest of her teammates. Fleck said the game was not as serious in high school, but as a Bomber she, along with the rest of her teammates, has taken her approach to softball more seriously.

Pallozzi said Fleck has been steadily improving with her bat and her defense in the outfield.

“She has a lot to learn still, but she is a quick study, which I like,” she said. “She has improved a lot in the pursuit where she’s in the outfield pursuing balls going overhead.”

Additionally, Pallozzi said Fleck makes a difference because she’s able to maintain her approach when it comes to hitting.

“She has good games, and she has bad games, but she stays at the even keel,” Pallozzi said.

Fleck’s teammates have also noticed her high average this season. Sophomore outfielder Tara Condon said she’s impressed with Fleck and the hard work she has been putting to be her best this season.

“[Fleck] is always a hard worker, always putting in the extra hours on and off the field, trying her hardest [and] giving 110 percent,” Condon said. “She’s just doing what she knows how to do and not thinking about it and doing great.”

Vincent, who usually hits in front of Fleck, said she believes Fleck’s natural talent at the plate and her ability to have such a high batting average as a freshman will make her an incredibly difficult batter for opposing pitchers to get out.

Fleck said another factor in her early season success is because of the encouragement of her teammates and said she has never had such a strong support system.

“Every at-bat is very supportive,” she said. “I just feel picked up every time if I don’t get a good hit, which makes it easier for me to get a hit the next time.”

Assistant coach Rinae Olsen said she is aware of the hard work Fleck has been putting in this season and said she has room to improve.

“It’s nice to have such great results coming out of a freshman because we are going to have her for three more years,” she said.

Fleck is at the top of her game now, but she said she realizes she still has to improve her approach at the plate.

“I don’t think about stats because it changes so much,” she said. “Basically, the only thing that I’m trying to do is stay composed and think one play at a time, one game at a time and, ultimately, one win at a time.”