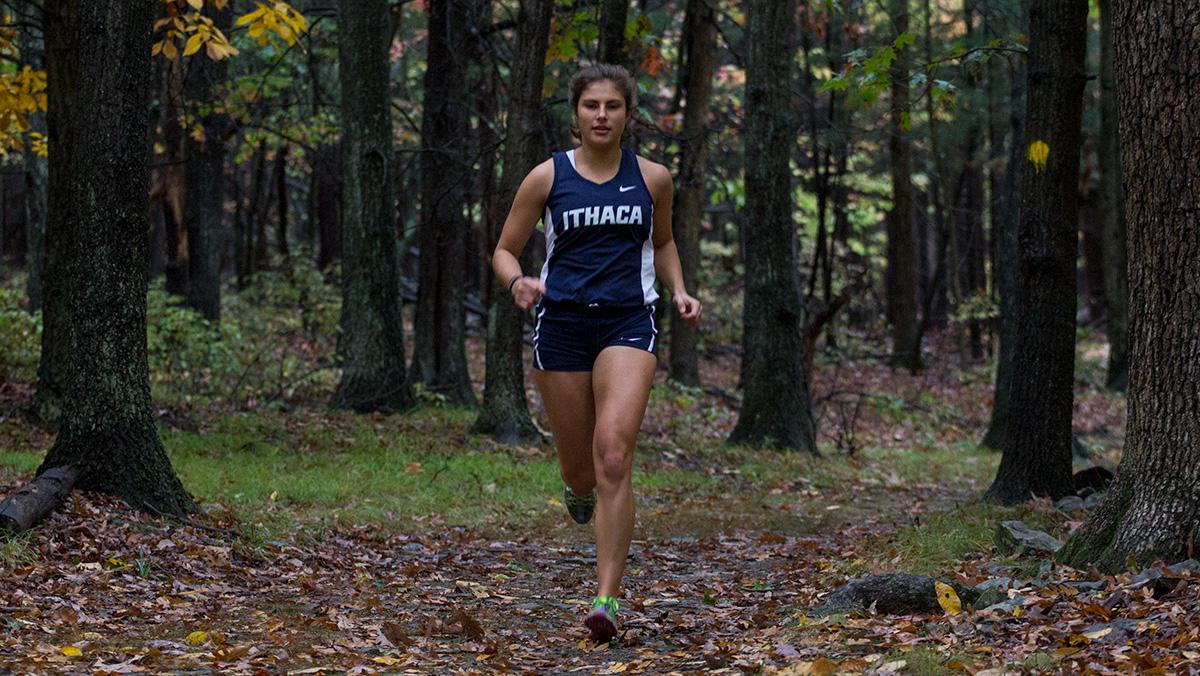 Graduate student Michaela Cioffredi always found comfort running in loops around a track. Then, she spent a year at college and claimed a new running territory: the cross-country trails.

Since elementary school, running has been a part of her life. Her parents encouraged her to run by signing the family up for local charity road races, and her sister showed interest in track and field. The sport was something her family did for fun and to relieve stress.

In college, Cioffredi played on the women’s club soccer team in the fall of her freshman year before joining the track team for the winter and spring. She said she was impressed with the level of the runners and was lucky to learn from them.

“It was a huge growing experience because I was able to have so much guidance from the coaches and from the other runners,” Cioffredi said. “I ended up having a lot of friends who were distance runners from the track program, and they raved about the [cross-country] team, and the coach as well said she saw potential [in me] in running longer distance, so I just gave it a shot.”

During Cioffredi’s first season of cross-country, she ran a personal best time of 23 minutes 47.7 seconds. As a junior, she made the All–New York State Collegiate Track Conference Third Team, All–Empire 8 Second Team and U.S. Track and Field and Cross Country Coaches Association All-Academic Team. She ran a record of 23:21.4 at the NCAA Division III Atlantic Region Cross Country Championships on Nov. 15, 2014. Cioffredi ran 23:09.0 her senior year, making All–Empire 8 First Team. So far for her last year on the team, Cioffredi’s record is 22:14.5.

As the Empire 8 Championship draws closer this season, Cioffredi said the team is in good positioning for a final championship title. In particular, in the Lehigh University Invite on Oct. 1, the Bombers placed second among teams within the region.

Assistant coach Alexa Rick said she was excited with the outcome because it was a good predictor of their championship-season performances.

Cioffredi said she believes the team is doing well because of its ambitious outlook.

“It gives me so much confidence knowing that I have 20 other girls with me that are all racing for the Bombers,” Cioffredi said. “The competitive drive is just showing other teams why we’re the best and why you want to be on our team, because we’re going to go after it. It’s that ‘catch us if you can’ mentality.”

Cioffredi was a cross-country and track and field captain her senior year but passed the title to this year’s seniors as she became a graduate student.

Sophomore Amanda St. Clair said she felt the team dynamic was not disrupted by the change in leadership.

“Between captains and people on the team, it’s not like a power hierarchy,” St. Clair said. “It’s like you have people on the team to guide you if you need them. They’re like a secondary coach. They’re essential, the seniors and grad students. … They’re the best resource ever.”

Cioffredi said she and another graduate student on the team, Tina Gibble, enjoy their roles as the “grandmas” of the team. Cioffredi said school is the priority and running is “pure fun.”

Both Gibble and Cioffredi are runners who are also fifth-year students in the physical therapy program. Rick, a sixth year PT student, said she knows how hard it is to balance a sport and graduate studies, even for a coach.

Cioffredi gets schoolwork done on the bus, and when she can’t make practice, she will run on her own. Rick said she has done a good job balancing her academics with athletics through a tough semester.

Instead of stressing over both school and race times, Cioffredi said, she uses running to have fun and to enjoy herself.

“She used to put a lot of pressure on herself, but just over time, she’s gained a lot of confidence from her experiences as a runner,” Rick said. “She has the experiences under her belt, and she knows putting more pressure on herself isn’t going to get her anywhere, so I think the relaxed attitude about it all has helped her a lot.”

In the past two races she’s run, Cioffredi dropped almost 50 seconds off her previous 6K record.

Cioffredi said she was glad she was able to run as a graduate student and has enjoyed the company of the team over the years.

“You really don’t get to have that experience often where you’re surrounded by people that all have the same goal as you and want you to succeed as much as you want to succeed,” she said. “Having that belief in you is so motivating.”