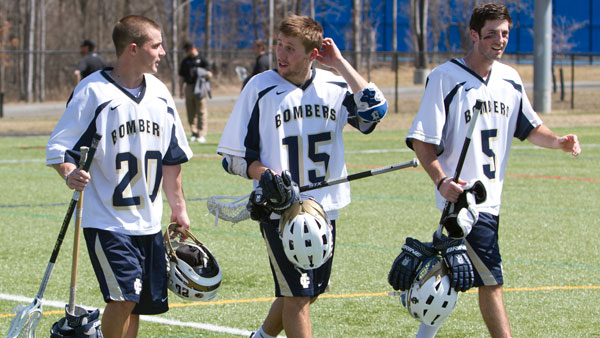 Heartbreaking — this is the word many members of the men’s lacrosse team used to describe the 2013 Empire 8 Championship on May 4, 2013. Playing the Nazareth College Golden Flyers on their home turf in Rochester, N.Y., was pressure enough for the Bombers going into the matchup, but surrendering a two-goal lead has never left the minds of four particular players.

Hailing from Fairport, N.Y., just six miles east from the Nazareth College campus, family and friends of four Fairport High School alumni, who all currently play men’s lacrosse for Ithaca College, came to support the Bombers competing for the E8 title. But their excitement faded as the minutes ticked away on the Blue and Gold’s 2013 season after the 12–10 loss.

Manilla said the four Fairport alumni have a bond on and off the field. Danylyshyn said growing up together has especially helped all four playing on the field, for they can often anticipate what one another will do next before anyone else on the team can.

The Fairport alumni on this year’s squad were recruited by Nazareth as high school seniors, but all of them chose to come to South Hill. They said the academic programs were a large factor in why the teammates decided to attend the college, but Torrelli’s experience as a former student at the college and member of the Bombers’ lacrosse program helped solidify their decision.

A popular town and friendly college atmosphere were selling points for the teammates, and Manilla said he realized he wanted to attend the college right away.

“I was looking at other schools, but I needed one visit here to know that I wanted to come to Ithaca,” he said.

Danylyshyn said Bombers’ head coach Jeff Long and Torrelli have very different coaching styles, but both are committed to their teams. He described Torrelli as more laid-back, while Long is more vocal and direct. Stepping up to lead the younger freshmen in his first two years with the Bombers, Danylyshyn was nominated for the captain position this season. Danylyshyn said both Torrelli and Long’s distinct coaching philosophies have helped his leadership skills shine through on and off the field.

Transitioning from high school to college, Manilla said his work ethic has not changed. In the offseason, Manilla said he travels close to home to work out at Fairport High School and even at Nazareth’s fields to keep his skill level as high as possible.

“[Both coaches] expect you to work hard and put all of your effort in, and I think Long and Torrelli are very similar in that aspect,” he said.

Torelli also played a vital role in preparing Sweeney, who was planning to attend the college, for the tough workouts and hard competition that comes with a college lacrosse program.

“Fairport had a pretty good program,” Sweeney said. “The competition was pretty good. It helped me to get better so college wouldn’t be as big of a transition.”

Fairport High School has been in 16 Section V titles and has claimed victory in seven. Fairport has also seen 16 Monroe County Championships, which are more like regular season titles. Playing in two New York State Championship title games, it has seen losses in both. One was to West Islip High School in 2010, when Manilla and Danylyshyn were juniors on the team.

Playing in a number of championships with Fairport prepared Manilla for the program in college because he said he now has experience playing in a championship game.

“I’ve been on a number of winning teams with coach Torrelli, and bringing that here has been helpful with this program,” he said.

Manilla said the Fairport alumni will use their championship experience from high school to prepare for the Bombers’ next matchup against Nazareth, which is expected to be the Empire 8 Championship. The South Hill squad got its first chance at revenge against the Golden Flyers on April 12, defeating them in regular conference play 10–8. Danylyshyn said this win was the team’s motivation looking ahead to the championship tournament.

“This game definitely had a little extra meaning, and it felt great beating [Nazareth], but we have to do it again when it counts,” he said. “We’re probably going to see them in the championship again.”

The four teammates together have contributed 19 goals and 31 assists so far this season. These four have the ability that can potentially lead the Bombers back to the Empire 8 Championship game in May.

“Compared to other kids on the team, I think there’s that special bond because we’re from the same hometown, and I think it brings us closer together,” Danylyshyn said.