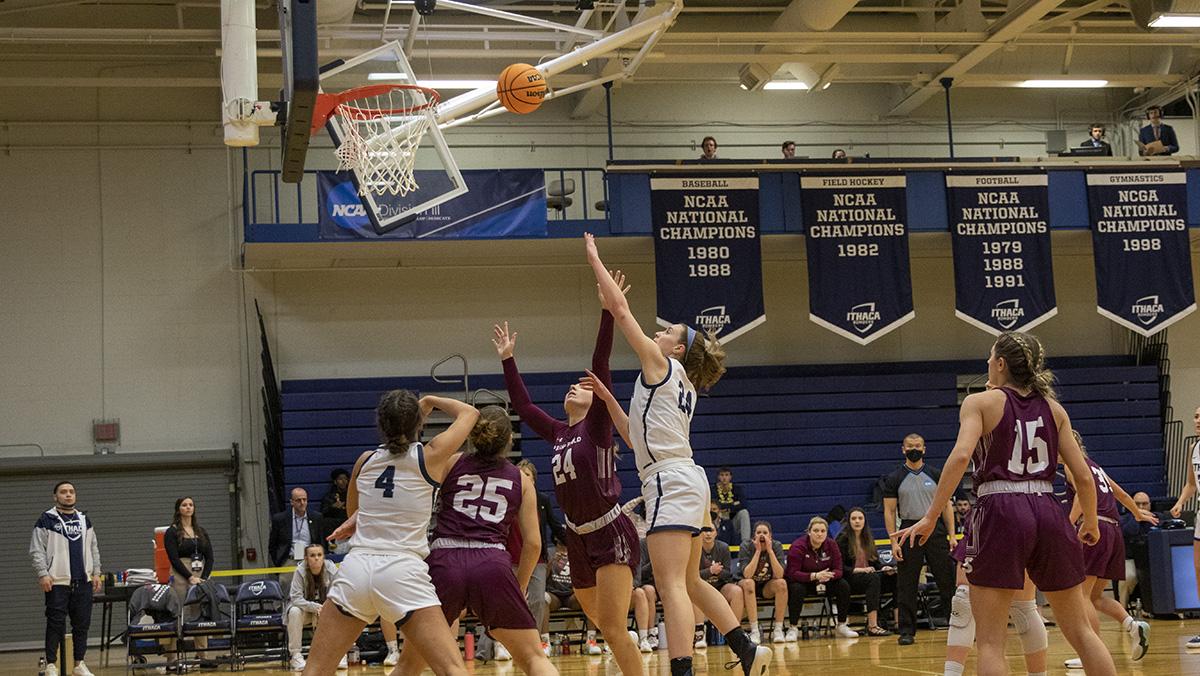 The Ithaca College women’s basketball team fell to Springfield College at the buzzer in the NCAA Tournament Round of 32 by a final score of 73–71 March 5 at Ben Light Gymnasium.

The Pride jumped out to a 10–2 lead in the first four minutes of the game following two bad passes by the Bombers. The Bombers struggled from the field early on in the quarter, shooting 2–6 from the field, while the Pride was 5–7 in the early going of the contest.

As the Bombers’ shooting improved in the second quarter, it was a back-and-forth affair between the two sides. Both scored 20 points in the quarter, which featured seven lead changes.

At halftime, the Bombers were down by two after graduate student guard Grace Cannon’s jumper bounced off the rim. They were led in scoring by junior guard Natalie Smith, who had nine points and was 3–3 from beyond the arc at the half.

“I’m gonna do what my teammates need me to do,” Smith said. “Tonight, it was hitting a couple of threes to keep us in the game.”

The fourth quarter seemed to belong to the Pride. It led the Bombers by 13 points with five and a half minutes remaining in regulation. However, it could not keep that lead as the Bombers came storming back with a score of 63–58 in the final minute. After several missed free throws by the Pride, Bombers’ graduate student guard Megan Yawman hit a game-tying 3-pointer to force overtime with 0.5 seconds left on the clock.

“We were down 13 points with however much time left in the 4th quarter and ended up tying it,” head coach Dan Raymond said. “The mental toughness is what I’m most proud of [in] this group.”

Yawman had a career-high in points, leading the Bombers with 16, as well as 3-pointers, hitting four of her nine attempts from beyond the arc.

“I always felt like I played my best in games like this,” Yawman said. “I knew we needed looks. I believed in myself and the reps I took in practice that I would knock them down.”

With 11 seconds remaining in overtime, junior forward Emily Dorn was sent to the free-throw line for an opportunity to take the lead. She made one free throw to tie the game at 71. As the Pride took the ball up the court with a chance to win it, its junior guard Rachel Vinton missed a layup, rebounded, and was blocked by Ithaca College senior guard Cara Volpe. However, after taking the ball out of bounds and missing two free throws at the end of regulation that gave the Bombers the chance to tie the game, junior forward Sam Hourihan hit the game-winning jumper to send the Pride onto the sweet sixteen.

“I knew we had the fire in us,” Hourihan said. “No matter missed free throws, missed layups, missed box outs. We had each other’s back, and it was great to redeem it.”

The Bombers finished their season with a record of 25–4, with a streak that included 20 straight wins.