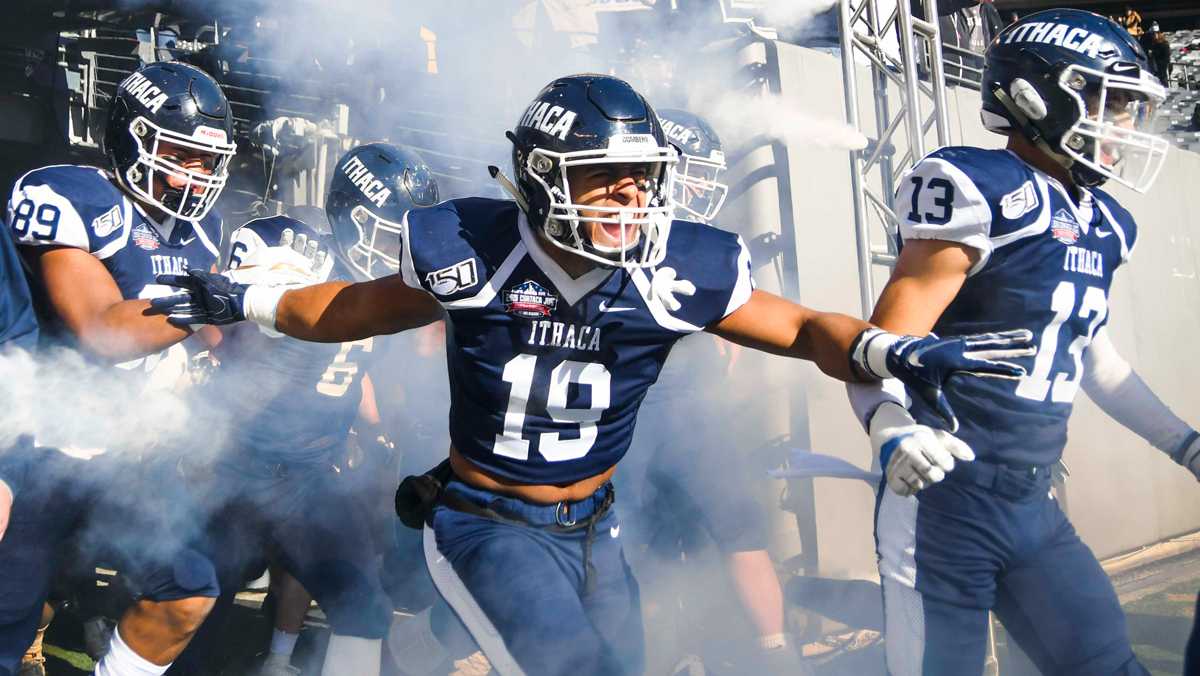 Over a year after the 2019 Ithaca College football season, a team of 12 Ithaca College Television (ICTV) students completed production of a three-part docuseries following the team through its season.

The docuseries, “Pride and Poise: Journey to the Meadowlands,” will release one episode from March 29–31 and can be viewed on local television and the ICTV YouTube page. The docuseries begins with the moment former quarterback Joe Germinerio came to Ithaca College in 2019 and ends with the Cortaca Jug game at MetLife Stadium. Director Garrett Bampos ’20 said the original idea for a docuseries started in March 2020. The plan initially was to follow the spring sports teams at the college, but after that season was canceled due to the COVID-19 pandemic, Bampos and his team switched their plan to cover the Fall 2020 season. When sports, in-person classes, and other ICTV shows like “The Gridiron Report” were canceled in the fall, Bampos and other producers decided to make a docuseries about the 2019 football season.

“I was talking with the other producers who had signed on to [The Gridiron Report], and we were talking about how we were going to be able to do a documentary completely remotely,” Bampos said. “The idea was to find one of the sports that had the most possible footage that we could access, and that narrowed it down to either football or basketball, pretty much. … Then we chose football because it was such an amazing season.”

Since the 2019 football season already happened, Bampos and his team had to find game footage rather than record it themselves. The crew got outside help from Jeremy Menard, television and radio operations manager at the college; Justin Lutes, associate director of the Office of Athletic Communications; and Paul Stanion, studio manager of technical operations. While Ithaca College had footage of its own football games, it was a struggle to find footage from Germinerio’s past seasons at The College at Brockport. Germinerio graduated from Brockport in 2019 before enrolling at Ithaca for his final season of eligibility.

Other members of the crew had not planned on working on the docuseries until production began in September 2020.

“We weren’t even planning on making this at the start of the semester,” senior Matt Clement, line producer on the film, said. “I was planning on producing two shows [for ICTV]. … When that got canceled, we were kind of scrambling for what we were going to do.”

Aside from finding footage in archives, there were plenty of challenges in the production of the docuseries, like editing remotely and acquiring footage from multiple sources.

“Making a documentary is challenging,” Bampos said, “But making a three-part docuseries completely remote is like walking through a minefield or an obstacle course — there’s just so many things that get thrown at you.”

Bampos and senior Lee Folger, assembly editor on the project, would sit on FaceTime or Zoom calls with each other for hours at a time three or four times a week from October to February. If the team was on campus with no COVID-19 safety restrictions, editing would be the responsibility of a small team rather than one person. Remote production also extended how long editing would take.

“When I would direct him to do something, there was a lot of miscommunication,” Bampos said, “That made the process probably twice as long than it would be if we were working in person.”

Folger would also have to edit the interviews of members of the football team, media members, and head coach Dan Swanstrom.

“Interviews are such a big part of sports documentaries, the sound bites you’re getting, all these things,” Folger said. “So making sure it doesn’t feel the same way that all of our Zoom classes have felt for the last like year, where like whether it’s something really simple where you’re just zooming in on a Zoom interview file so that you don’t see the name tag; you don’t see like the Zoom branding.”

The interviews were a crucial part of making the docuseries. Clement said the team interviewed approximately 12 people, and the interviews the crew conducted dictated a lot of what it did with the story.

Folger said the interview with Swanstrom gave them a peek behind the curtain of how the team handled the end of its season.

“He gave some really good insight as to what the energy was like on the team,” Folger said. “He used candid language. He was very honest. He told us he had never seen a team so deflated after two losses.”

After reviewing the final product, the crew was proud of how the docuseries turned out.

“We had a really great team, and even though it’s been months and months, I feel that we were putting together a fantastic product, and I couldn’t be more proud of the people that were working on it and the product itself,” Clement said.

Bampos said the production was a learning experience, but since everyone was invested in the docuseries, the journey was rewarding.

“If I tried to do this myself, there’s no chance that I would have finished this in six months,” Bampos said. “This would have taken me two years.”