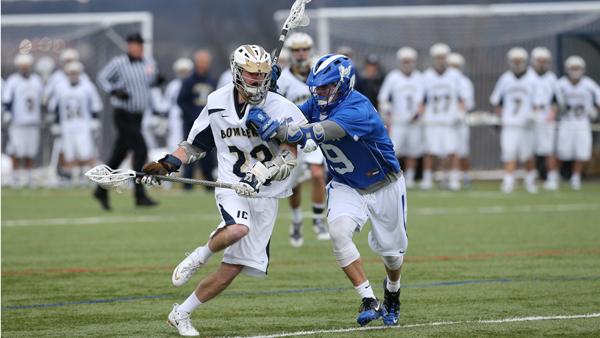 A 10-goal win and a seven-goal loss in its first two conference games are representative of the inconsistent play that is defining the men’s lacrosse team’s season.

The Bombers were outscored 8-1 by Nazareth College in the second half of their 15-8 loss last Friday and have a home game against St. John Fisher on April 12 that will go a long way in determining their contention for the Empire 8 title. Only twice since 2005 has the Empire 8 tournament champion lost more than one conference game during the regular season.

A second conference loss would likely leave the Blue and Gold out of contention for a home playoff game and with little margin for error in the conference playoff race. If the Bombers lose against St. John Fisher, they will fall into a tie with Hartwick for the fourth and final playoff spot in the conference. Despite the narrowing margin for error, senior defenseman Marc Roberts said the team still maintains confidence in its conference schedule.

Bomber Head Coach Jeff Long said the inconsistent play is not making him push the panic button quite yet, because the fundamental and defensive errors committed in their recent losses are fixable. He said the potential overconfidence of players on the team was a surprising concern.

“We’re not good enough to cruise through anybody,” Long said. “We don’t have an easy game the rest of the way this season. No matter how you look at it, every team we play is going to give us their best.”

The Fisher game is the first of a five-game stretch of conference games that will conclude the regular season for the South Hill Squad. That stretch of games concludes with a visit to Stevens Institute of Technology on April 27 in what is the regular season finale for both teams. The Ducks are ranked 8th overall and have not lost at home to the Bombers since 2009.

The Bombers have a favorable schedule, with home games against Hartwick and Elmira next week. The teams are a combined 7–16 to start the season, and neither team has defeated the Bombers in more than a decade. Besides Stevens, Ithaca’s only other road opponent is Utica, a team they have only lost to once in program history.

What makes the margin of error that much narrower for the Bombers are the losses they have suffered already. The late-game collapses against top-ranked SUNY-Cortland and 8th-ranked Cabrini serve as missed opportunities for the Blue and Gold, who could have had an impressive resume for a potential at-large bid. Regardless of the result against RIT on April 10, Long said the only way to the playoffs is through the Empire 8s.

“It’s really about playing good lacrosse and getting into and winning the Empire 8 tournament,” Long said.

Long said the team’s 22 turnovers against Nazareth on April 5 are something that will have to be cut down in the upcoming games if they want to have a chance at postseason play. He also said missing the playoffs would be a humbling reality for a team that won its first five games and came within a goal of defeating the No. 1 team in the country. Senior midfielder Andrew Bruce said the team couldn’t take any opponents lightly.

“These past few years, we’ve dropped a couple close games we should have beat,” Bruce said. “The out-of-conference losses means we got to take care of business in the Empire 8.”