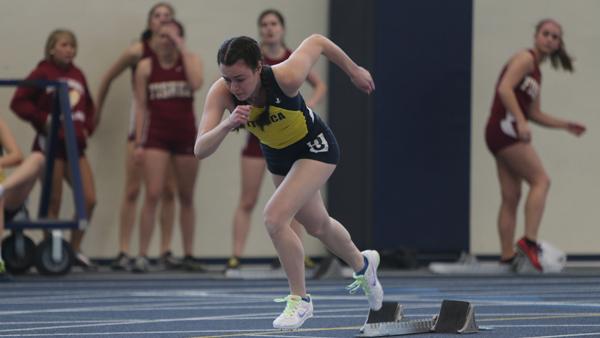 The Ithaca College Men’s and Women’s Indoor track teams both cruised to victory in the Empire 8 Indoor Track and Field Championships, each winning their sixth straight.

Many individuals contributed to the Bombers’ victories. In the 800 meter, the team finished with the top three spots. Billy Savage was the winner with a time of 1:59.19 followed by Mason Mann and Dennis Ryan. In the Pole Vault Jarrod Monacelli and Steve Episcopo finish 1st and 2nd respectively.

In the mile, Nate Bickell and David Geary looked like they were going to finish top 2 for the 2nd straight year, but freshman Sawyer Hitchcock surprised even himself by beating both of them with a time of 4:32.71, which edged out Bickell by a half of a second.

“I did not expect to be beating either of them today but it is a really cool feeling and it makes me excited for the rest of the season to come,” said Hitchcock.

After the meet, Coach Jim Nichols said he was excited about how well the team is performing after losing a sizable graduating class last year.

“Every year is different, every year is unique and every year is special,” he said. “This is a totally different group than what we had last year. We graduated some very good seniors, we have some good freshman that are with our program now.”

Nichols said the team upped the intensity in practice leading up to and during the meet, and they will continue to push themselves after today to be better come February.

“The guys have worked hard since we came back in early January to prepare for this and we worked through this meet, which we talked about to prepare ourselves for the next couple weekends,” Nichols said.

Hitchcock said the team is looking forward to bigger and better things.

“This is not the goal of the season,” he said. “But this is still definitely exciting to get a bigger meet under my belt.”

The women’s team scored 199 points, followed by Stevens’ 76 point showing. The team was led by a couple of athletes like Harmony Graves who finished 1st in the 60 meter with a time of 7.89 seconds and finished second in the 200 meter. Amanda Rissmeyer contributed with 1st place in the High Jump, 2nd in the 60 meter hurdles and 3rd in Shot Put. Emilia Scheemaker won the triple jump with a jump of 11.54 meters. Eliza Dewart and Martyann Chromik finished as the top two in the 400 meter, both running it in just over a minute. Jennifer Randall won the 800 meter with a time of 2:18.64, and right behind her were three other Bombers giving them the top four spots.

In the 60-meter hurdles, Christine Benway finished 1st for the Bombers with a time of 9.25 seconds. Four of the top five finishers were Bombers.

Head Coach Jennifer Potter was also excited about the results of today’s meet. She said though it is a younger squad, they are further along this year than they were last year.

“I don’t think we are as deep as we were a year ago but from a performance standpoint, we are ahead of where we were,” she said. “I’m excited about what we did today and how it will lead us into the rest of the season, especially the postseason.”

The Bombers’ next meet is the Bomber Multi Invitational which will take place next Saturday.