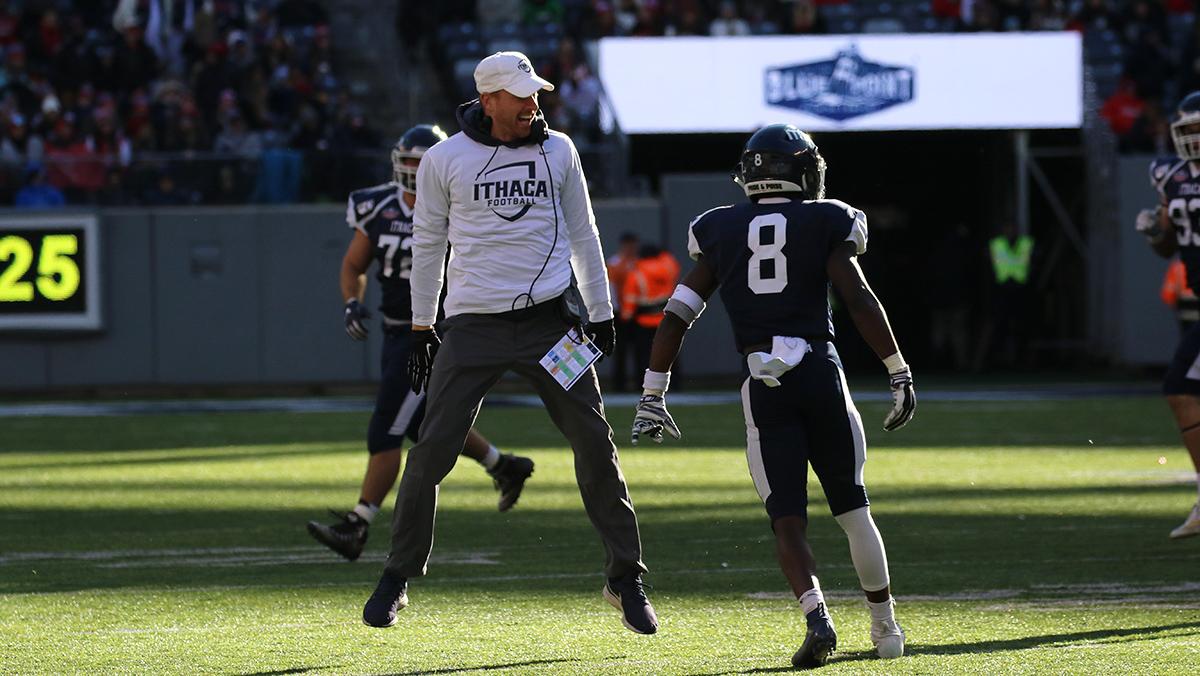 After the 2019 season ended, many Ithaca College football players were saddened to learn that Michael Toerper, the coach who recruited them, was departing for a new position. However, these same players erupted with excitement when they learned Toerper was returning to South Hill as the head coach of the program.

A Feb. 18 announcement from the college stated that Toerper is returning to South Hill as the 11th head coach in the history of the program. He will officially start this role March 1. Toerper previously served as the defensive coordinator for the college from 2017 to 2019, under former head coach Dan Swanstrom, who announced his departure from the program Jan. 24. As the defensive coordinator for the Bombers, Toerper helped lead the team to a 24–9 record over three seasons and a 27–17 victory against Salisbury University in the Scotty Whitelaw Bowl in 2017.

“It means everything to me and my family,” Toerper said. “I feel honored and very grateful to be the next head coach here at Ithaca [College].”

Toerper has spent the past two years as the safeties coach at the College of the Holy Cross. The Crusaders went 13–4 in his two seasons, allowing under 18.5 points per game and intercepting 25 passes, both the best marks in the Patriot League during that stretch. Before he was hired on South Hill, he spent seven seasons at Johns Hopkins University, where he worked with Swanstrom as a wide receivers coach and special teams coordinator. He also spent his collegiate playing career at the University of Pittsburgh, graduating in 2008. He appeared in 36 games for the Panthers, recording 15 total tackles as a defensive back.

Susan Bassett, associate vice president and director of the Office of Intercollegiate Athletics at Ithaca College, said she and the other members of the selection process were impressed by Toerper’s plans for the future of the team and believe that he is the best choice to guide the program.

“We ran an intensive, comprehensive interview process and he proved to be an effective communicator of his vision and leadership for Ithaca College football,” Bassett said. “Together with his demonstrated success as a coach at each of his coaching opportunities, but most importantly while with us at Ithaca, there was unanimous support from the alumni search committee, the on-campus search committee and everyone who interviewed him when he was a finalist on campus.”

Each of these players were on the roster the last time Toerper was on the sidelines for the Bombers. The coach is also familiar with several members on his staff, having coached with current assistant coaches Sean Reeder, Gary Bucci, Josh Kowalczyk and defensive coordinator Trevor Warner during his first stint with the team.

“The program has had an enormous amount of success these past five years, and the coaching staff who are in place right now are exceptional,” Bassett said. “One of our priorities is continuity and we feel that Coach Toerper offers the highest amount of continuity we could achieve in this search process.”

Garcia said he was thankful that Bassett allowed the team leaders to meet the coaching candidates before anyone was hired. He said it was a part of the process that was very important to the players.

“What was most impactful was Susan Bassett allowing the team leaders to be a part of the process,” Garcia said. “I really respect Susan for that.”

The Bombers went 32–11 during Swanstrom’s tenure, with Toerper being on the staff for all but eight of the victories. Bassett said she is excited about what Toerper brings to the table and believes that he will continue the team’s success by impacting the program both on and off the gridiron.

“[He has] enormous passion and energy,” Bassett said. “Coach Toerper is someone who exudes a love for the game, a passion for teaching and coaching and knowledge of strategies, training techniques, recruiting effectiveness and the ability to motivate his staff and the players in the program to work at a very high level.”

Bassett announced Toerper’s appointment to the team, generating excitement from the players as they rushed to greet their new coach. The video of Toerper’s introduction has over 95,000 views on Twitter as of Feb. 23.

“It was pure joy,” Bassett said. “It was so much fun to have Coach Toerper here in person and to be able to share with the team, first and foremost, who our next head coach was going to be. And [to] have them react that way was an incredible moment.”

Reeder, who also played under Toerper at Johns Hopkins University, said he thinks Toerper is a great fit for the job because of how well the players will rally around him.

“He’s all energy, all the time,” Reeder said. “That’s why the kids were so excited when he got named [as] the head coach. You can see that in the video of when Susan introduced him to the team. That’s natural. That’s organic, because that’s who he is.”

The Bombers were one of the top defenses in the Liberty League during Toerper’s three seasons on the sidelines, allowing the fewest points in the conference during the 2017 and 2018 seasons. The team’s most dominant campaign came in 2018, in which the team yielded an average of just 12.8 points per game. The coach said he is looking forward to the opportunity to reunite with players he coached during his first stint on South Hill.

“I think I built a strong bond with these players, especially the ones that I coached and the people that are here, and I believe that the future is so bright for this program,” Toerper said. “Obviously my time here before really just fueled my excitement for the opportunity. And that’s really because of the people here at Ithaca.”

As the Bombers’ defensive coordinator, Toerper recruited many members of the current squad to South Hill. Roumes, a senior defensive back, said he is thrilled to have another chance to work with Toerper.

“When he left here, it was very hard for me just because he recruited me and he was my position coach,” Roumes said. “He’s one of my favorite coaches and one of the best coaches I’ve ever had. So to have him come back, it’s just really exciting and I’m really excited to see what he’s going to be able to bring to our team.”

Garcia credits Toerper with building the defense that allowed just 10.7 points per game in 2021, even if he was not there the past two years.

“He was a special part of this program a few years ago. He built what today’s defense has become,” Garcia said. “And when he’s on the field, he has an aura. He has an energy … he spreads that everywhere he goes.”

Toerper also recruited Robinson and said the announcement was a full-circle moment for him. He said he believes Toerper’s effectiveness as a coach can be attributed to his ability to communicate with his team.

“His greatest skill is being personable,” Robinson said. “He’s able to form relationships that not only carried through football, but outside of football, and I think that matters most. So, it makes it easier for athletes to come talk to him about anything in life or anything in football.”

Wingfield, the starting quarterback, said Toerper was the coach that originally convinced him to come to the college, even though Toerper coached defense and Wingfield played offense.

“Obviously he’s a defensive coach and I’m the quarterback,” Wingfield said. “[But] I came here because of him … the amount of trust I have in him, [he] really, genuinely wants the best for you, and that’s from a personal level. He’ll call you and he’ll talk about your family with you, he’ll talk about your life.”

Toerper said his primary focus on the field will be to help the team reach its full potential and enjoy the process of competing.

In 2022, the team’s sights will be set on making its first appearance in the NCAA Championships since 2014. Wingfield said he and the team believe Toerper will be able to lead the team and help it make a run in the postseason.

“There couldn’t be a more perfect candidate in [the team’s] opinion,” Wingfield said. “We’re super excited. I truly trust in [Toerper] to take us to that next level and get us in the playoffs … I really think he’s the guy for it.”