Ithaca College’s standout defender dances to her own beat 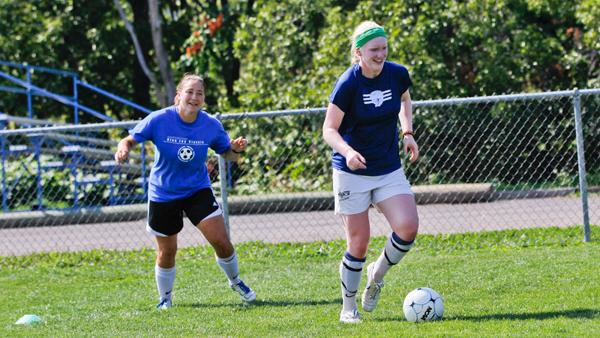 When the women’s soccer team steps onto Carp Wood Field for warm-ups, there is a flurry of activity. The music starts, and players stretch out and start their drills. Amid the hustle and bustle of pregame activity, it’s hard to miss No. 24 Anna Gray leading her teammates and dancing to the warm-up tracks playing over the field.

Gray, one of the Bombers’ most decorated athletes and 2011 Empire 8 Conference defensive player of the year, takes her responsibility as a team leader seriously. According to junior forward Ellyn Grant-Keane, Gray handles herself well under the pressure.

“It’s great having someone on the field who has a strong presence,” Grant-Keane said. “It is also good to have someone in the back who plays strong mentally while bringing positive energy on the field.”

Enthusiasm is something that Head Coach Mindy Quigg expects from her team, but she looks to leaders like Gray to challenge other players by calling out and correcting mistakes on the field.

“Players need to be challenged because that helps them grow, and I think if the team isn’t growing, then we’re not going to be a championship team,” Quigg said.

With a full season of starting and playing multiple positions under her belt, Gray says she now embraces the opportunity to lead and help other teammates succeed.

“Coming in as a freshmen or new player is difficult because it’s a different level of play, and I have always been that player who just wants to be out there and play soccer because that’s what I love to do,” Gray said. “I want to be able to not just make myself better but my team better as well.”

Along with her pregame energy, Gray gives the Bombers’ roster flexibility with her ability to play different positions on the field. She was initially listed as a forward on the 2011 roster, but after a brief stint up front, shifted to center midfield and defensive back where she was able to thrive.

While playing center midfield, Gray’s primary focus was on defending and keeping scorers from other teams in check. However, she scored three goals — two of them coming in the first matchup between the Bombers and SUNY-Cortland last September. Gray’s ability to be a dual-threat player helps Quigg strategically place her on the field while in play and for set pieces  — she has the goal set of having a defense that allows the least amount of shots possible.

“We are trying to move her up on offense because she has such a hard shot and a direct approach toward the net,” Quigg said. “We take great pride in our defense, and it’s hard sometimes to give up a defensive role when [Gray] is so important back there.”

Her resilient play last season helped the Bombers to eight shutouts in 22 games. Gray’s steady play was an advantage for the Bombers and a major contribution to the Bombers’ success last season. Gray is one of eight returning starters on the 2012 roster, which gives the Blue and Gold a great deal of experience. But Gray had the additional experience of knowing all the moving parts around the field given her experience in the front, middle and back.

During the Blue and Gold’s postseason run that ended in the Final Four in Trinity, Texas, Gray established her new pregame favorite song to dance to, which was “If You’re Gonna Play in Texas” by Alabama. Gray said it was symbolic of the run the team was able to make last season, and it brought some comic relief to her teammates.

The Bombers are looking to repeat their fast start from last season when they rolled through their first nine without a loss, and Quigg said one thing that shouldn’t change is the way Gray’s energy permeates the team.

“She is very honest with herself and with her play, and that makes her very coachable,” Quigg said. “She takes everything, not just soccer but her schoolwork, seriously even though she has that energetic and worry-free personality and attitude on the outside.”