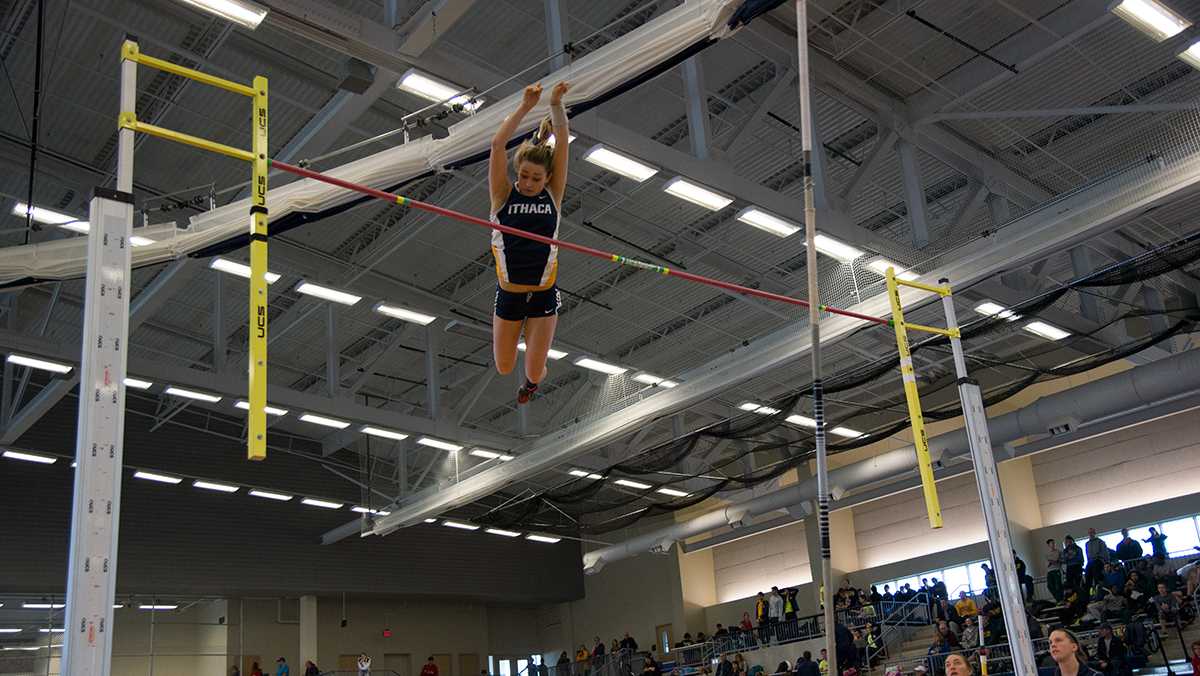 As the age-old saying goes, records are meant to be broken. Junior Katherine Pitman is living up to this apothegm by not only breaking records, but also surpassing them on multiple occasions, most recently by eclipsing the Ithaca College pole vaulting record.

Pitman, who already broke her own school record with a 3.80-meter jump Dec. 5, 2015, at the Greg Page Relays, went over Jan. 23 to the East Hill of Cornell University for the Cornell Indoor Track Upstate Challenge and jumped an incredible 3.90 meters on her first attempt. The score was the best by any NCAA Division III female pole vaulter, and it launched Pitman into the position of top pole vaulter in Division III track and field at the time.

She then continued to build off her performance at Cornell when she matched her 3.90-meter height the following weekend at the John Thomas Terrier Classic in Boston, Massachusetts.

Pitman said she is grateful for the praise she received from her coaches and teammates and that she felt good that she was able to attain those feats with much less experience than other pole vaulters.

“I have heights that I want to jump, and if I made those heights, there are certain things that come with that,” Pitman said. “But I was more concerned with my heights than breaking records. I have a goal, an end, and I am taking steps to get there.”

However, Pitman was not able to celebrate her record feat for very long. The reason she was not able to glorify her accomplishments is because two weeks after Pitman’s record jump, the defending Division III national champion pole vaulter, Cimran Virdi of the Massachusetts Institute of Technology, topped Pitman’s mark. Virdi reached a height of 4.00 meters at the Art Farnham Invitational on Jan. 30, making Pitman’s score only the second best height in Division III.

Head coach Jennifer Potter said Pitman’s record-setting performance last month was significant and predicts she will jump even higher in the future than she did at the Cornell Indoor Upstate Challenge, especially with the lack of training and experience she came with into her second season on the track and field team.

“Pole vault is very technical. Most people have been doing it for years,” Potter said. “As for Kat, she started 14 months ago with little vaulting in the summer and fall, so it’s pretty impressive that she picked it up this quickly and is not close to where she is going to be yet.”

Pitman originally came to the college to participate in the gymnastics program, but after several injuries, she was forced to give up the sport.

She said she credits people like Potter for being able to break a record like she did.

“It’s such a specific sport. Potter gave me a chance by letting some random girl walk onto the team,” she said. “Taking the time and the patience to teach me step by step.”

When comparing Pitman’s Division III statistics with other NCAA divisions, Pitman’s performance this season would be considered one of the top pole vaulters in both Divisions I and II.

Senior captain Alex Rechen is ranked 14th in the Division III national standings for pole vaulting so far this indoor season. She previously held the program’s record in the pole vault before Pitman set the new mark this year.

Pitman said she considers a person like Rechen as someone to look up to and to drive her to do her best.

“She is a role model,” Pitman said. “She had a school record herself and is the hardest worker I have ever met.”

Rechen said the reason for her and Pitman’s success is because they both, along with the rest of the team, push themselves to jump as high as they can possibly go.

“Every time you lose sight of your goal, your teammate is right there to push you,” Rechen said. “I think it’s really helpful for everyone, and we’re all trying to be All-Americans and get to places where we haven’t been before.”

Since she is a clinical health studies major, Pitman will have two extra years of eligibility to continue improving after she graduates next spring semester.

Pitman said she wants to be a part of the 4.00-meter club, and reaching that height will be one of her priorities moving forward.

Pitman said if she is confident in her ability, she will be able to attain all of her ambitions.

“If you keep telling yourself that you can’t do it, it won’t happen,” she said. “If it’s something you love to do, then it will come. Passion is what it’s all about. Do it for the inner feeling reaching of the goals you set for yourself.”