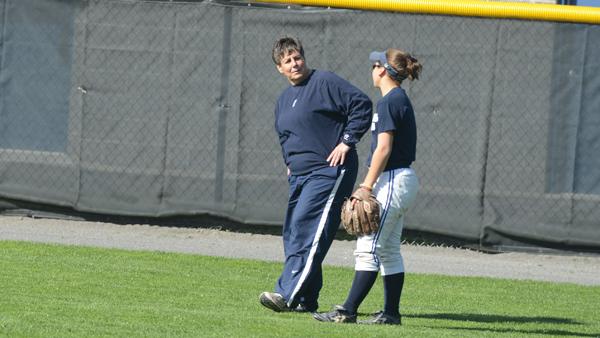 The Bombers softball team rallied from an early 5-0 deficit in game one of their two-game set with Kings College and won by a score of 6-5 on April 17. This comeback victory marked win 700 for the program, with Deb Pallozzi in season 25 as Head Coach. Pallozzi has received many accolades in the previous year, as she was inducted into the National Fastpitch Coaches Association Hall of Fame and the Ithaca College Athletic Hall of Fame.

Steve Derderian: The first thing I have to ask off the bat is what does this milestone mean for not just you but for the players, the team and other coaches alongside?

Deb Pallozzi: It says a lot about all of them. It says that I have great help and continued great support with Hannah, Dan and Erinn this year. It just makes me think of all players who have been there the last 25 years.

SD: I realize that you’ve had a few players on this team who were around for the win 600. What kind of development have you seen from them and the program from then until now?

DP: They’ve developed a lot. I mean, you look at a player like [senior] Jen Biondi, who has really become a complete player. We’ve moved her around a lot from the infield and outfield, and she’s always done a great job, even when she was hurt during last season. The other seniors have been a huge part of this program and been great leaders as well. Just winning 100 games together is a great accomplishment in itself.

SD: Was it special to see this milestone win come in a game where the team came together and rallied for a victory in extra innings?

DP: It’s special anytime you win an exciting game like this. It’s all about that timely hitting. Everybody talks about it, and the first two innings we had bases loaded and couldn’t capitalize. Julianne’s [Vincent] had that inside the park grand slam, and she ended up winning the game as well, so we got that timely hitting. When we start bunting and running and doing all those things, they wake us up a bit. It was an exciting game, but I’m just happy we could win that game and win the next one as well.

SD: You’ve achieved quite a few accolades in the past year with two hall of fame inductions. Has this year been one of the most memorable years in your career?

DP: I have many great memories from being a coach, so it’s hard to say one year is more memorable than the next. I will say that accomplishments like these aren’t possible without all the great players and coaches. I’ve had the opportunity to work with such great groups every year, and like I said, all this would be impossible without them.

SD: Now that this accomplishment has come and gone, what do you hope to see the rest of the season or for the rest of your career with the program moving forward?

DP: Right now it’s about consistency, having a sense of urgency and making sure we can get those timely hits and hit the ball hard and up the middle. In the long run, we want to see the program keep growing. We’ve had a lot of success in the past, and we want to keep it that way for as long as possible.