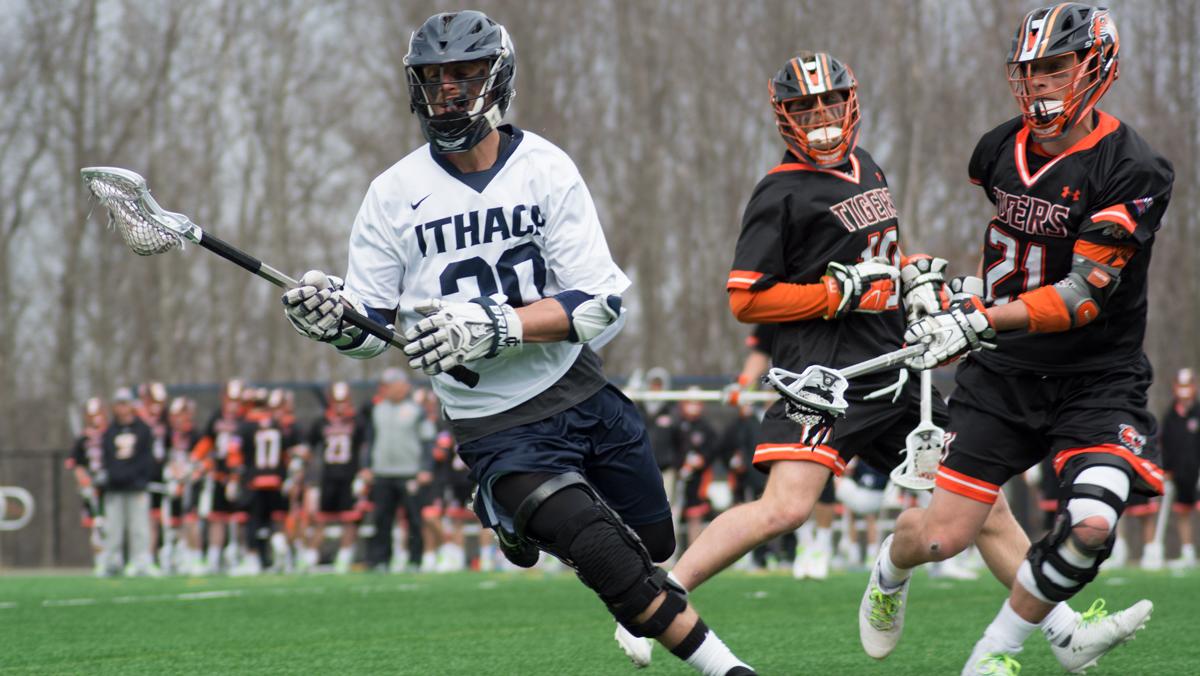 The No. 15 Ithaca College men’s lacrosse team fell to No. 1 Rochester Institute of Technology 19–9 April 11 at Higgins Stadium. This was the Bombers’ first home loss of the season and their second loss in the Liberty League Conference.

The Tigers took control of this game from the beginning and shutout the Bombers in the first quarter. After a scoreless three minutes and 59 seconds, junior attack Shawn Nally split the pipes to put RIT on the board. The Tigers found scored twice more in the quarter with shots off of the sticks of freshman attack Quinn Commandant and junior long-stick midfielder Matt Pogue.

The Bombers’ deficit doubled in the second quarter. Junior attack Will Witter started the quarter by putting the Bombers on the board, however it was quickly matched when senior midfielder Kyle Killen scored his 47th goal of the season. After another goal for the Blue and Gold, the Tigers netted five straight goals, including two from senior midfielder Zach Ursu. Sophomore attack Ryan Ozsvath finished off the quarter for the Bombers with a goal in the final minute, his 30th goal of the season.

RIT broke the game open in the third quarter by outscoring the Bombers 8–1 including four of Killen’s game-leading six goals. RIT head coach Jake Coon said this is what he expects of Killen.

“It was kind of a typical day for Kyle,” Coon said. “He likes to shoot the ball and he shoots it well. He’s been mixing his shots up lately and he’s not afraid to shoot it.”

Senior attack Kaelan Fitzpatrick split the pipes for the Bombers’ one goal of the quarter.

The Bombers seemed to find their stride in the final 15 minutes of play as they managed to hold the Tigers to two goals and more than double their own from the first three quarters. Three consecutive goals from freshman attack Connor Brumfield, junior midfielder Brendan King and senior attack Jake Cotton started off the quarter for the team and after a goal from Killen, the Bombers scored two more from senior midfielder Stephen Morrell and junior midfielder Josh Della Puca.

“I don’t really understand where that came from,” Long said. “I think we played afraid early, I think we played fearful and you can’t play anything fearful. I think they got a little confidence as the game went on and they stopped worrying about making mistakes.”

This was the worst game of the season for sophomore goalie Robby Atwood, who allowed 19 goals and made 12 saves during the game. However Long said he was pleased with Atwood’s performance.

The Bombers will look to rebound against Bard College at 3 p.m. April 14 in Annandale-on-Hudson, New York.