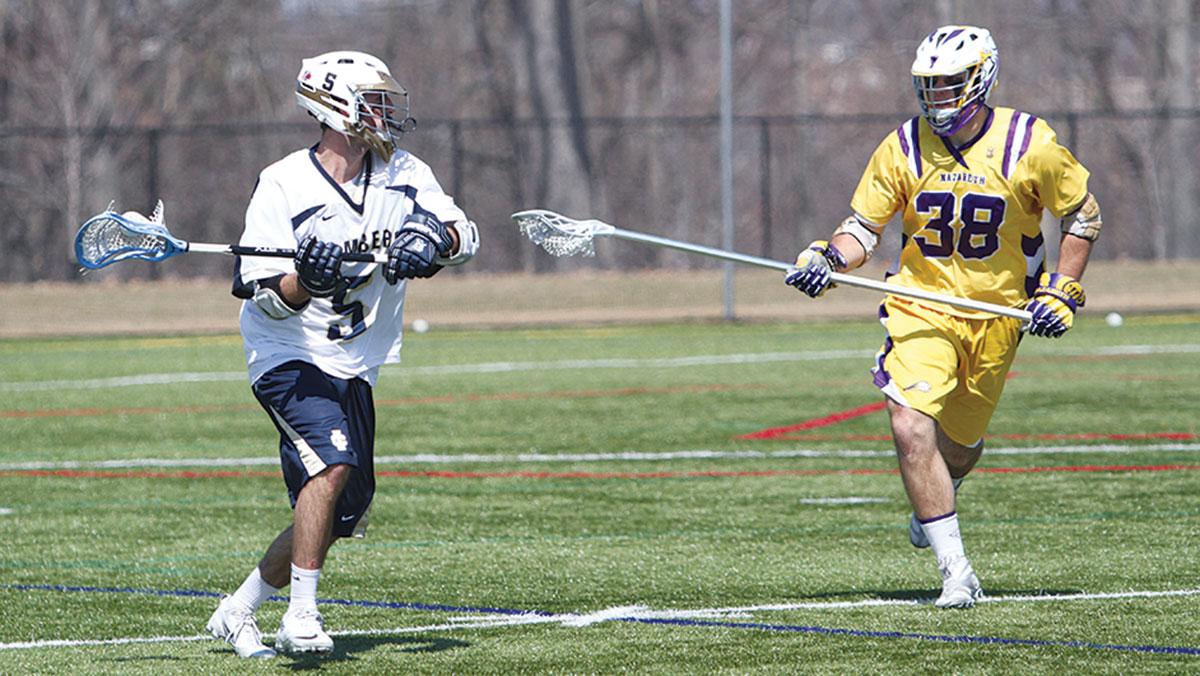 Most of the men’s lacrosse team’s preseason has been a challenge between reserving indoor space and braving the bitter cold and snow.

The Blue and Gold were also recently ranked No. 1 in the Empire 8 Men’s Lacrosse Preseason Coaches Poll.

However, junior defender Eli Gobrecht said most of the time the team tries not to look too much into the rankings.

“It basically means that this year we have a target on our back,” Gobrecht said. “Being the No. 1 team, everyone wants to beat us. There’s a lot of teams on our schedule that kinda circle that game because it’s a premiere matchup for them, so it just means we’ve gotta take every day like one day at a time.”

After graduating nine seniors last year, the team looked to rebuild as it recruited, and succeeded. Of the 36 players on the team, 12 are freshmen. The team also returns 13 sophomores and 11 upperclassmen with five juniors and six seniors.

Senior defenseman John Figarelli said he thinks the team has had one of its strongest preseason starts in his four years on the team, and it can have an equally strong season.

“As far as talent from last year, I think we can be just as good — if not better,” Figarelli said. “We’ve been real consistent this preseason, I don’t think we’ve had a preseason where we’ve put together so many good practices — you know the first three days, coach kicked us off the field and said, ‘You guys are lazy,’ and ever since then, we haven’t had a bad day.”

Head coach Jeff Long said the team is looking forward to having some key returners back this season, who he thinks will have a big impact on the team’s success.

“We have some good kids at each position that have had some pretty good experience,” Long said. “I think the key is really how those next-level kids do for winning games. Your starting team kind of matches up usually pretty even with most of the people we play against. When you make subs, and your level doesn’t go down, or it actually goes up a little bit, that’s where you win a lot of games.”

This season the South Hill squad looks to become the first men’s lacrosse team in school history to repeat an Empire 8 Championship title, something the upperclassmen said is a huge focal point this season.

The matchup with the most intrigue for the Bombers is Rochester Institute of Technology on Feb. 28. Rochester was the squad that knocked the Bombers out of the race for an NCAA title last season in the second round with a 20–8 victory.

Figarelli said one of the goals for the team this season is to get further in the postseason than they did last year.

“We [want to] repeat as Empire 8 champions, and as far as the NCAA playoffs go, we’d like to go further than we did last year,” he said. “We know it’s going to be tough because our midfield is the youngest part of our team right now, as far as experience goes.”

The team has had a tough preseason due to the inclement weather in Ithaca thus far, which has restricted outdoor practice times. However, senior attacker James Manilla said he sees it as just another factor that is going to make the team stronger when it comes to its performance.

“We’re all pretty firm believers in everything we do up until game day gives us an advantage,” he said. “Whether it’s what we’re doing in the weight room, things like shoveling the field, just dealing with the adversity that’s been thrown at us, I think will only make us stronger as a team.”

But for now, Long said he wants to focus his attention on the start of the season.

“Being so young, I think every game is huge right now,” he said. “I think we need game experience. So that’s going to be our biggest thing is the how fast our team can mature. We really do need to go back the old cliche, ‘one day, one game at a time,’ and get better each day. So that’s kind of how we’re going to do it.”