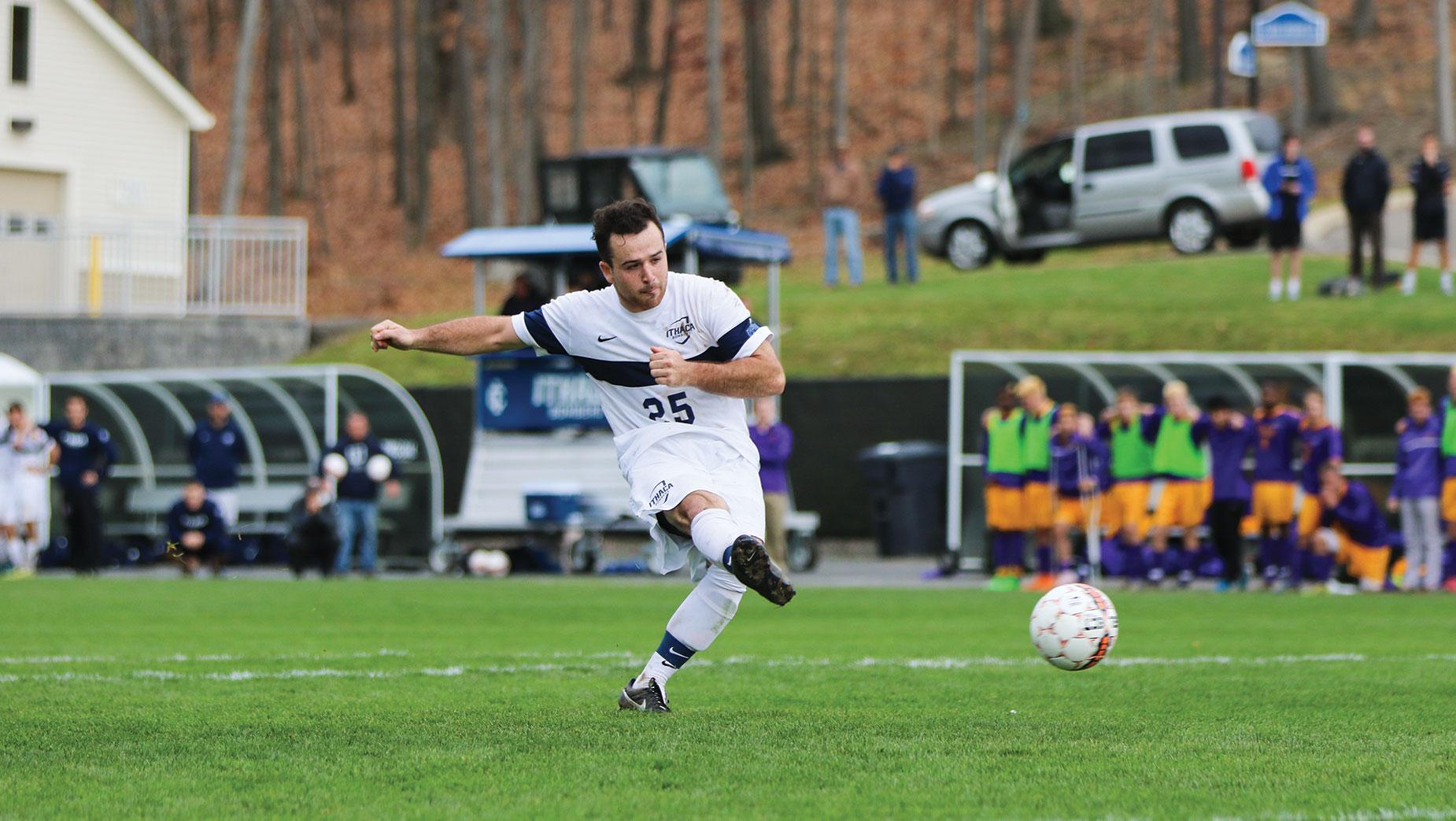 YANA MAZURKEVICH/THE ITHACAN
Senior Sam Boylan shoots a penalty kick against Elmira College in the first round of the Empire 8 Championships on Nov. 6, 2015.
By Cal Dymowski — Staff Writer
Published: August 24, 2016

The Ithaca College men’s soccer team’s 2015 campaign ended in similar fashion to the way the 2014 season concluded: a heartbreaking loss in the Empire 8 Championship game to the Stevens Institute of Technology Ducks.

Most teams would want to forget two consecutive title-game losses, but senior captain Scott Halpern believes in the exact opposite mentality.

Sophomore midfielder Zach Lichtman, who started in all 18 games on the Bombers’ squad in the 2015 season, said the 1–0 championship game loss to Stevens was devastating, but the Bombers are looking for a way to turn that around. Lichtman said the team is adopting a new mindset of finding a way to win.

“If we keep working really hard at practice and go into every single game with the same mentality of ‘We have to win — we have to build off each win,’ I think by the time we get to Stevens, we’ll be ready,” Lichtman said.

Despite a disappointing end to the season, the Blue and Gold posted a 6–1 record in the Empire 8 Conference in 2015, which was good enough to earn them the top overall seed in the conference championship. However, it was outside the conference where the South Hill squad lost steam, winning only one game and dropping six others along the way to an overall record of 7–8–3 on the year.

Halpern said the Bombers place a high emphasis on the Empire 8 games. However, he said the competition from outside of the conference is beneficial to the Bombers’ progress throughout the season.

“We always have a hard and challenging out-of-conference schedule to push us and help us see where we are at,” Halpern said.

Lichtman said the team can also succeed if the Bombers focus on their season goal of getting to the NCAA tournament.

“We just have to have a good mindset going from now on,” Lichtman said. “We just have to stay focused on our game, and if we make it to the tournament, we can make a little bit of a run. We’ll just take it one game at a time.”

But above all the noise, the Bombers have a clean slate heading into the 2016 season.

Lichtman said new reinforcements are being brought into the Bomber program in the form of 10 rising freshmen, which head coach Patrick Ouckama said he is looking forward to.

“We definitely have a good group of younger guys coming in that we are excited about,” Ouckama said. “Just like last year, we had a strong freshman class, and I’m expecting it to be another strong one as well.”

Lichtman also said he is nursing a groin injury he sustained over the college’s winter break but hopes his injury will spark competition for his starting spot, something he believes will help increase the quality of the squad.

“The more competition there is in practice, the more success we will have as a team,” Lichtman said. “I’ve just kept working hard and doing what I did last year, but hopefully, there are those guys competing with me for my spot.”

Halpern was named one of the three new captains for the 2016 season, along with fellow seniors Sam Boylan and Andrew Coburn.

With new leadership put in place, Halpern said, he and his fellow captains have implemented new goals for this year’s South Hill squad to be more successful and to be more of a family as well as a team.

“We want it to be a serious environment,” Halpern said. “We still want to strive to crack the top 25, make the Empire 8 finals. But ultimately, we want to have a good time and have something more than just being on the field as a team. We want to be a group off the field as well as on the field.”

Ouckama said there is no significant player to watch out for since all returners and the incoming freshmen know they have a chance to make an impact.

“I’m looking forward to seeing how hard they’ve been working over the summer and who’s prepared and who’s ready to jump into their role where they are going to have an impact for us right away,” Ouckama said.

The Bombers will open up their season on the road at 2 p.m. Sept. 2 in Potsdam, New York, against Clarkson University.