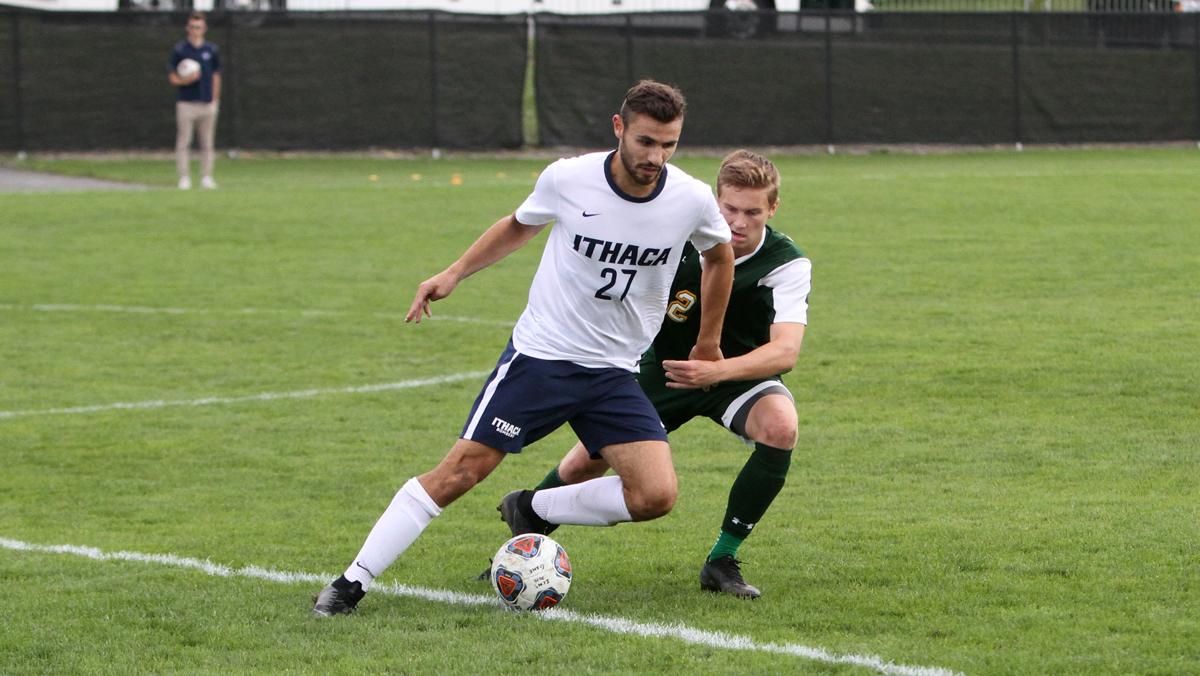 The Ithaca College men’s soccer team kept their undefeated record intact by tying Clarkson University 0–0 at Carp Wood Field. This was the Bombers fourth overtime game of the season, and their second draw, as neither side broke down defensively within the 110 minutes of gameplay.

While the Bombers offense was kept quiet throughout the first half, they showed a stellar defensive performance which kept Clarkson scoreless with the Bombers only having two shots on goal, even though the Golden Knights held onto the ball the majority of the time. The most notable moments in the first half, were when freshman midfielder Alex Leahy made three stops on breakaways. All of these potentially game–changing plays were opposing Clarkson’s junior forward Stephen Klimek, with the help of sophomore midfielder Drew Cohn on the third stop.

In the second half, momentum shifted in favor of the Blue and Gold. The Bombers kept the possession on the Clarkson side of the field. Although they were outnumbered in shots 5–3, it was an improvement to their two shots in the first half. Head coach Kyle Dezotell was happy with the team’s performance in the second half.

Even though the South Hill Squad brought their offensive A-game in the second half, it was not enough for a decision to be made, as the Golden Knights defense mirrored the perfection of the Bombers backline from the first 45 minutes.

Most of the first overtime featured the ball being traded by both sides near midfield. In the final few minutes when Clarkson had two chances to end the game with a shot from junior forward Stephen Klimek landing wide left, and another shot wide right from sophomore midfielder Matt Adamou.

In the second overtime, the Bombers took control of the ball, but failed to capitalize on their opportunities. The Blue and Gold had their best chance to win in the 101st minute when junior midfielder Jack Monnes had a chance to score with no defenders in sight, but missed the net wide right. The game ended in a tie, but the Bombers keep their undefeated record, which is now 6–0–2.

Sophomore goalie Max Lichtenstein said he was impressed with Leahy.

“ [Leahy] has been really impressive to me,” Lichtenstein said. “He’s probably been the best player the past two games stopping the other guys’ number one attack. I’m really impressed with him, and I think he’s gonna get better and better.”

The Blue and Gold are back in action at 3 p.m. Sept. 29 in Canton, NY against St. Lawrence University.