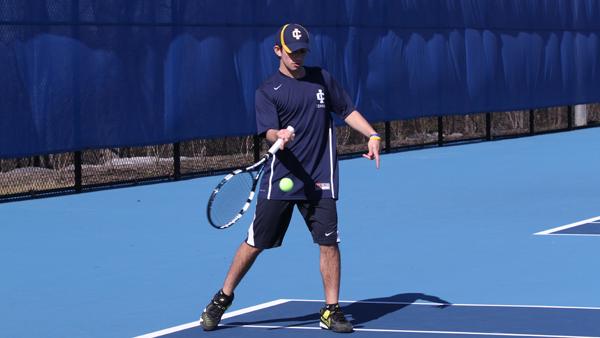 Priscilla Lee/The Ithacan
Freshman Chris Hayes hits the ball during a doubles match against Utica College on April 17 at the Wheeler Tennis Courts. The Bombers defeated the Pioneers 9-0 in the Empire 8 matchup.
By Matt Constas — Staff Writer
Published: April 24, 2013

The regular season is coming to a close, and the Ithaca College men’s tennis team is just beginning to get into the swing of things. After starting the season 1–10 in non-conference play, the Bombers have turned things around in conference with a 4–1 record; two of those wins came this past weekend. The Bombers have finished in either 1st or 2nd in the Empire 8 for the past seven years, and with a three-match winning streak, the Bombers are likely to keep that trend going.

After a tough loss to the Stevens Ducks on April 14, the Bombers have won three straight matches in conference play, boosting them into 2nd place in the Empire 8. Their last win against Alfred University clinched them a berth in the Empire 8 playoffs.

On Saturday against Nazareth College, the Bombers came out on fire. They swept doubles 3-0 to start the match and eventually won it 6-3. Freshman Chris Hayes said the key to their success has been their increased intensity, and without that, they wouldn’t have been able to win.

“[In the beginning], I did not have a lot of confidence and got crushed because of it,” Hayes said. “You can’t beat good players if you don’t have any confidence. Against Nazareth on Saturday, we brought more intensity, and the results showed that. If we continue to bring that intensity, I like our chances against anyone.”

The Bombers had a tough non-conference schedule in the beginning of the season, and the team got off to a rough start. Freshman Joey Hanf said that tough stretch is what is helping them out going into postseason play, and with a couple of key conference wins, the team is in a great position.

“Our non-conference schedule prepared us really well for our regular season in Empire 8 play,” he said. “Beating Naz was also a huge confidence boost for us.”

The Bombers have had a handful of injuries this season. Senior Kyle Riether played in his first match this weekend coming off of a torn labrum, junior David Keltz has been hampered by a concussion and knee problems and freshman Zach Lipson is out for the year with a knee injury. Despite the injuries, Hayes said, he has noticed that his team has been able to step it up and fill in what they were missing.

“Everyone’s ability to step into the lineup and play has helped us out a lot,” he said. “Joey Hanf and Kyle VanDelden stepped into the lineup and have stepped up. Justin Levine and I have both played well at two and three singles with Lipson out of the lineup, so I think us dealing with adversity has been most impressive this year.”

The Bombers have been a defensive team that looks to rally and not make big hits, but they have become more aggressive since the loss of Lipson, following the Stevens game April 14. Lipson is one of their only players that plays with an aggressive style and a big serve. Hanf said he has done his best to play aggressively and said he has noticed his teammates doing the same thing, which will lead to many good things.

“I’ve been trying to play more aggressive by putting more pressure on the opponent,” he said. “I think this is a theme with everybody in our lineup. When we dictate the points, we usually have control over the match.”

Some of the players have adjusted their game because of the absences of their teammates. Sophomore Justin Levine said he is trying to play bigger with a stronger serve after the loss of Lipson, who brings power to a rather defensive team. Levine said focusing on the task at hand will help make him successful.

“I have really focused on my singles game and hitting big consistently, especially with Zach out and moving up to second,” he said. “The one thing that has helped me out all year is just to refocus after every point and to make sure I do not let the prior point have an effect on the current point I am playing.”

The Bombers have been focusing more on practice sets with singles, but especially with doubles play. Doubles have been a struggle for the team, but they are beginning to win them, which helps set them up for a good match.

“The more match play and experience we have the better,” Hanf said. “We’ve started to get our doubles going. In our last three matches. We’ve swept doubles to go up 3-0, which gives a huge edge going into singles.”

Levine said the team has also been able to improve on many of individual things, because their coaches are always watching, and as long as they are putting in good practice, they will be able to make improvements.

“All of our coaches do a great job of helping players individually work on parts of their game that they are struggling,” he said. “Our guys know that the better you prepare in practice, the easier the matches will come.”

The Bombers have two more matches left in the regular season: one at home Saturday against St. John Fisher, and then they travel to one at Hartwick to finish off their regular-season play Tuesday. These two conference matches will give them the opportunity to keep up their winning ways before the postseason begins.