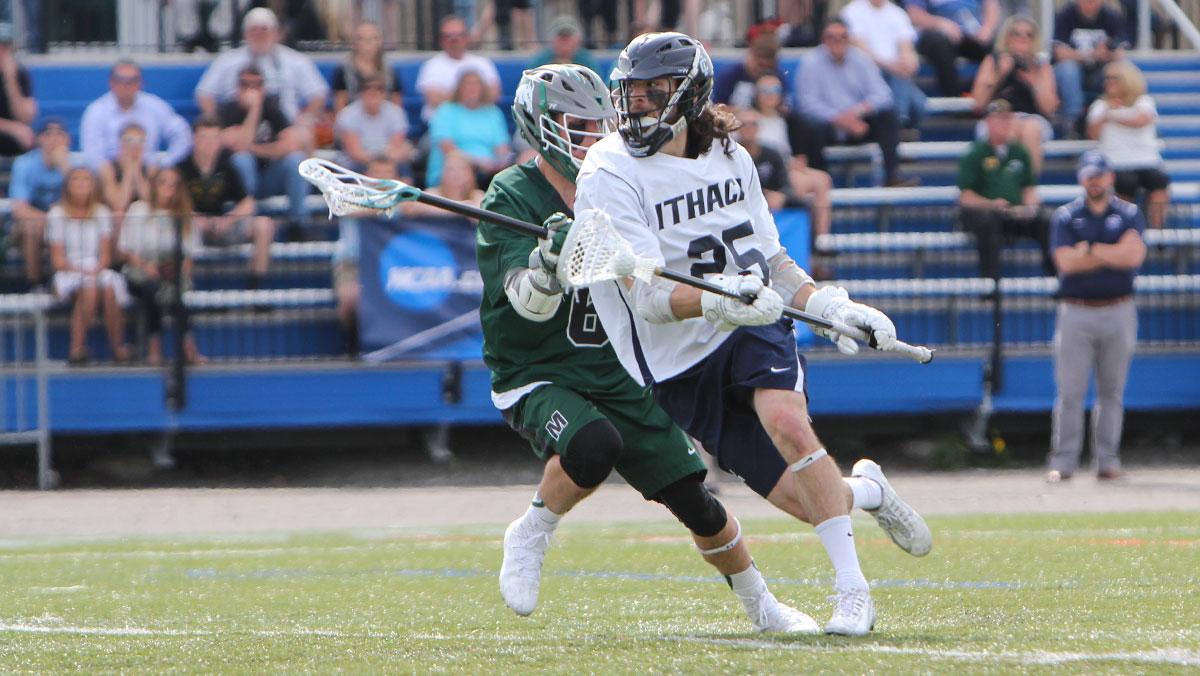 CAITIE IHRIG/THE ITHACAN
Senior defensemen Eli Gobrecht scored his ninth goal of the season in the Bombers 24–7 victory over Morrisville State College May 11.
By Matt Hornick — Staff Writer
Published: May 12, 2016

The No. 1 ranked Ithaca College men’s lacrosse team dominated Morrisville State College, 24–7, in its first round matchup in the NCAA Championship. The Bombers 24 goals was the highest goal total this season. This is the Bombers’ 17th consecutive win and they are now moving on to the Sweet 16 of the NCAA tournament.

There was a slow start to this game, as only six goals were scored in the first quarter. The Bombers started strong,  scoring the first three goals of the game. Sophomore attackman Jake Cotton kicked off the action with  his first goal of the game and was followed by goals from sophomore midfielder Stephen Morrell and senior defenseman Eli Gobrecht.

Freshman attackman Nick Geswaldo answered back for the Mustangs with two goals of his own. After an eight minute scoring drought, junior attackman Jack Shumway netted one more for the Bombers with 30 seconds left in the first quarter.  Cotton also had the first of his two assists on the day, which were his 49th and 50th of the season. Cotton now holds the Bombers record for assists in a season, breaking the previous record of 48 held by Logan Bobzien ’08.

The South Hill squad broke out in the second quarter, shutting out Morrisville and scoring 13 goals of its own. Junior attackman John Januszkiewicz had six of his game-high eight points in the second quarter with four goals and two assists. Morrell and Shumway each scored three goals, Cotton netted two and freshman midfielder Conner Crosson netted one as well.

Gobrecht said the team’s ability to control possession was the biggest factor in shutting out Morrisville for the quarter.

“We didn’t have to play a lot of defense because our offense had the ball for most of the quarter. Grant was doing a great job on the faceoffs so we didn’t get much action in the second,” Gobrecht said.

The starters were getting pulled from the game in the third quarter, which occurred after Morrell and Januszkiewicz were able to each score one more goal — the only Bomber goals of the quarter. After that, the Mustangs put three goals in the quarter, one off the stick of Geswaldo and two from senior attackman John Sherlock.

As the game was completely out of reach by the fourth quarter, the Blue and Gold outscored Morrisville 20–5 in the final quarter. Freshman long-stick midfielder Aaron Sanchez scored his first goal of the season to kick off the quarter, followed by two from freshman attackman Connor Hulme and one from freshman attackman Scott Glowner. Mustang Louie Geswaldo then found the back of the net. His brother Nick Geswaldo scored his fourth goal of the game for the Mustangs three minutes after Louie.

All four Bomber goalies saw the field in this game. Senior Scott Sidnam got the start and the win by playing only the first half. Junior Jack Deragon saw the whole third quarter and four minutes and 20 seconds of the fourth.  He was followed by junior Justin Isaacs who saw four minutes and 43 seconds of action and was the only goalie to not allow a goal in this game. Freshman Davis Bird closed out the final five minutes and 57 seconds.

“They’re a very talented and well-coached team. They’re very balanced and have incredible shooters on the offensive end,” Longo said.  “Our defense was not sharp in the second quarter and struggled to stay with the Ithaca offense.”

The Bombers head coach Jeff Long was very impressed with his team’s performance in this game.

“We started a little slow but we had a great second quarter with a lot of assisted goals and any day you can get your whole roster on the field is a good day, so it’s a good day in Ithaca,” Long said.

The Bombers will host Montclair State University in the second round of the NCAA tournament May 14.