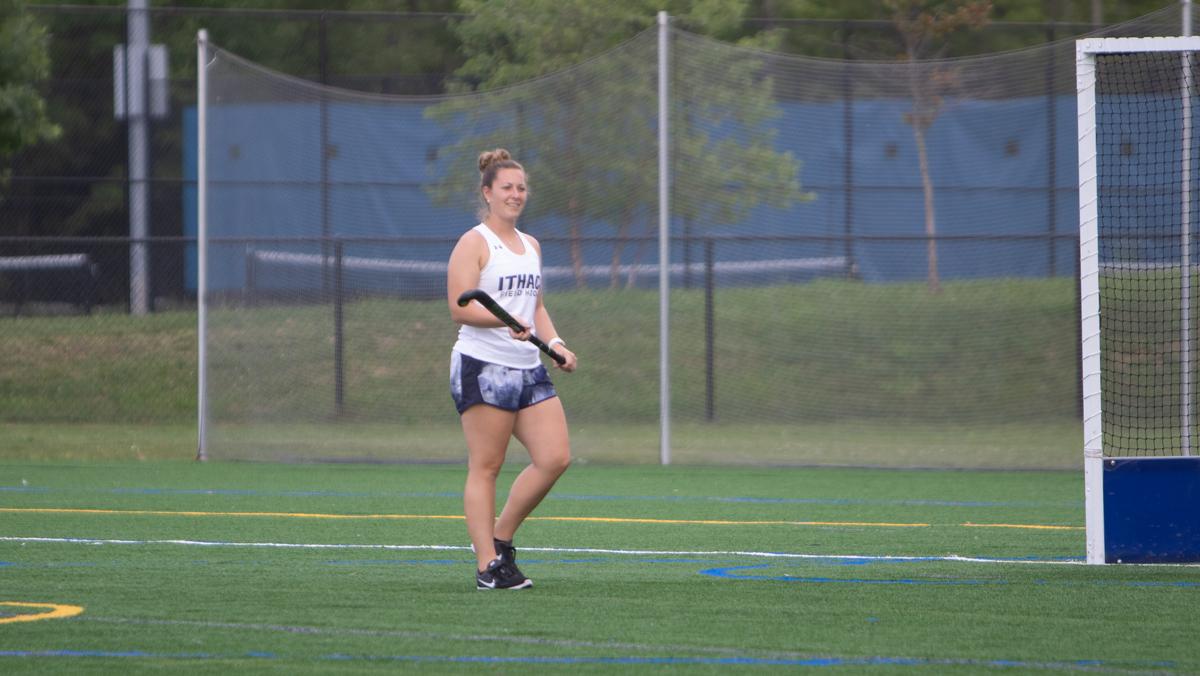 PHOTO ILLUSTRATION BY MAXINE HANSFORD
Assistant field hockey coach Caitlin O'Brien '16 demonstrates during practice. The Alumna is now in her third position with the team, going from player to trainer to coach.
By Jack Murray — Assistant Sports Editor
Published: September 4, 2018

The Ithaca College field hockey team is hoping to have a successful Fall season, and a familiar face will be helping them along the way.

Caitlin O’Brien ’16, who played as a back for four years at the college, has returned to the Bombers as a voluntary assistant coach as she finishes up her graduate degree in athletic training.

Assistant Sports Editor Jack Murray spoke with O’Brien about her experiences on South Hill, her hopes for the team and how coaching fits into her future.

Jack Murray: You were first a player here, then served as an athletic trainer and now are an assistant coach for the field hockey team. How has that transition been?

Caitlin O’Brien: It’s definitely been interesting. It was nice having one of my first athletic training jobs with a school I was comfortable with and knew a lot about. Coach [Kaitlyn] Wahila was awesome to work under as an athletic trainer. What really made me want to come back as a voluntary assistant was that she has really set a good culture with the team that has made me want to come back and be a part of it. Coaching has always been something I have wanted to do, and since I am still here picking up some last credits, I figured it would be a perfect opportunity to see if I really do enjoy it.

JM: Are you working with the backs or are you just a general assistant coach?

JM: As a player, you were a back who would score points too. How would you plan to incorporate that into the team’s backs?

CO: I played defense, but I was also on corner plays, which was how I got most of my goals and assists. I had a pretty strong hit, so I was up there, but there are a couple of players on the team who are defenders but still play on the corner plays. I just try to settle down and think positively and just get them to practice it a lot.

JM: Are you excited to be back and coaching?

CO: I coached in the summer when I was in high school and a little bit in college, but I have really been focused on athletic training so I haven’t been able to play at all. It’s just been so different being an athletic trainer, and while you are still involved you don’t get to play with the girls, which I really enjoy.


JM: You mentioned that you loved coaching field hockey and have coached it before, Do you believe that a college varsity field hockey coach is a career you could pursue in the future?

CO: Yes, I definitely want to stay in athletic training for a bit because it is my passion. But, I enjoy coaching, even if it’s just for summer kids trying to get better for their seasons.

JM: What do you enjoy about coaching?

CO: I really enjoy just getting to work with the girls on the field. I like to show them what I have learned from the game.

JM: Besides your specialty as a back and on corner plays, what else do you think you are adding to the team as a coach?

CO: I think I add a lot of energy and other than that I just work on outleting because when I played I was the person over the ball. So just being able to show them what to do against certain presses is something I can bring to the team.

JM: What is your impression of the current women’s field hockey team?

CO: I am really excited by this team. We have some really young players who are adding a lot to the team and I think our strength is that we have really come together as a unit, especially considering we have only been together for a little over ten days. And they have really been able to come together and create a good culture. Right now we just need to grow off of the momentum we have gained and take it into the season.

Head Coach Tracey Houk isn’t the only one who’s giving the field hockey team coaching input this season. New Assistant Coach Lindsey Hendricks has joined the team this season from Skidmore College and brings a whole new perspective to the field.